What’s New with Roll? Going for a Walk

Roll missed his exercises last week, so we thought we had better get out there today. Both of us were a bit tired of the arena, so we opted for a walk down the hayfield road. It was a rainy day and Roll had rolled in the mud, so we just did the hairbrush and shedding blade routine without the vacuum cleaner this time.  Then we were ready to go. 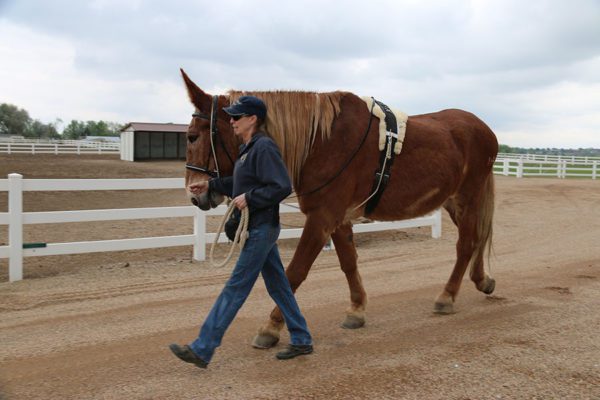 Although he missed his exercises last week, he was still a bit better on the right hind foot. He did not want to put full weight on it, but I was sure he would do better after his walk in his core muscle building gear: the snaffle bridle with the dropped noseband, his surcingle and the “Elbow Pull” to make sure that the topline and abs would be engaged during the workout. 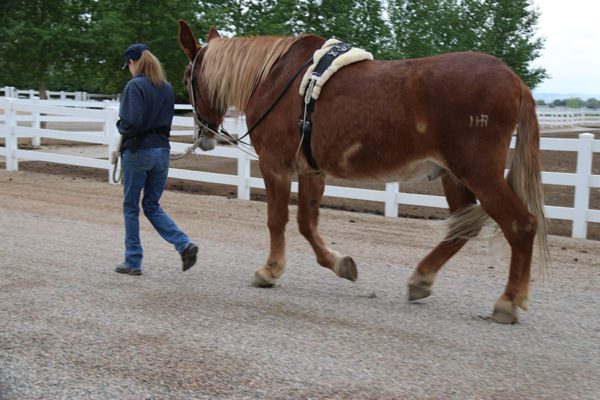 In the spring, we only turn out in dirt areas while the grass is growing. The equines will get turned out on grass on June 1st. This helps to maintain a nice stand of grass in all the turnout areas that will last all summer and into the fall. We never graze the equines on the hayfield pastures. 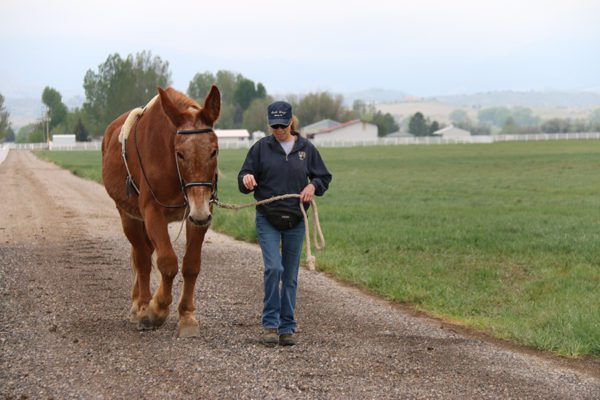 Contrary to popular belief, horse manure (or any manure that is not processed) will contain weed seeds and will contaminate the weed-free hayfields that we have managed to grow on 112 of our 127 ½ acres. There is an obvious size difference between us, but Roll is a gentleman and though he REALLY wanted to eat the grass, he still stuck to the routine as best that he could. 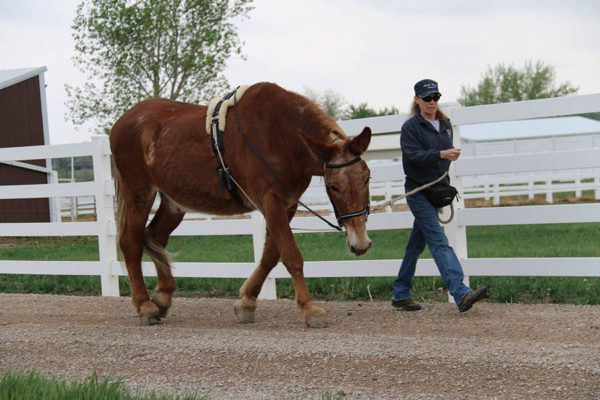 He did try to drag me off the road and over to the grass, but I just planted my feet, pulled on the lead rope as his right foot was coming forward and redirected him back down the road. 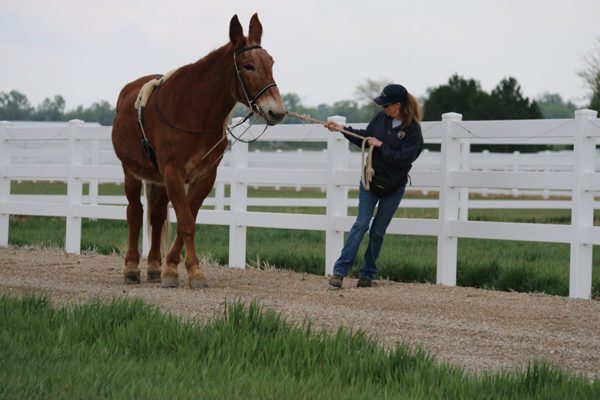 He was so good that I decided to let him have a bite and we then continued on down the road. We walked about a half mile out and back. 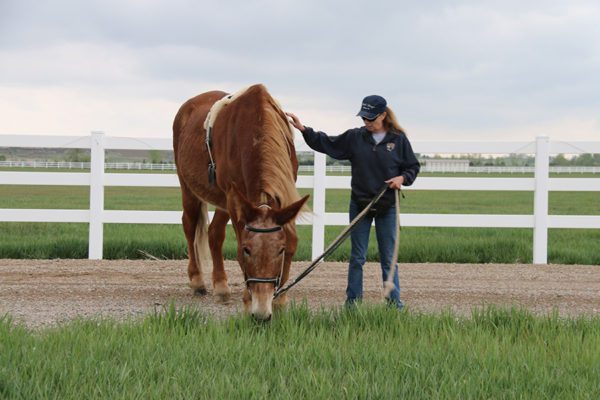 On the way back, Roll was breathing a bit hard, so I know he put his heart and soul into his exercise yet again. What a great guy! When he got back, he was fully weighting the right hind. 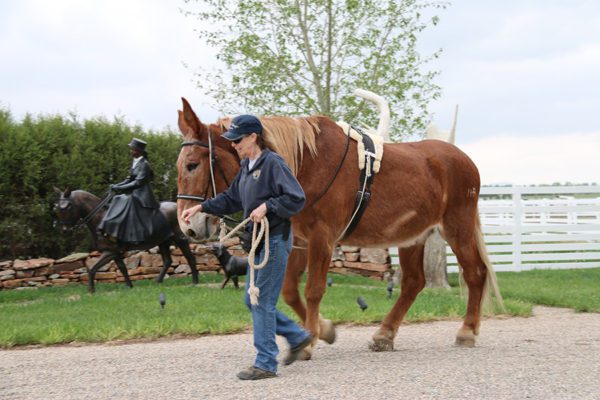 The “Elbow Pull” is a self-correcting restraint that encourages the equine to use his entire body to go forward in a relaxed and correct postural frame. It promotes the stretching and strengthening of the topline and results in the hind legs coming well under to support the body and to keep the hind quarters (motor) providing active impulsion. In the “before” pictures, the equines are simply moving their front and back legs underneath the torso, but the torso is not really moving due to inactivity in the rib cage muscle groups. In the “after” pictures, you see that the equine posture has dramatically changed and now produces an active and “rippling” effect throughout the rib cage muscle groups (which can be seen in the moving videos). This is the basic difference between a really good dressage prospect and one that might be passed over. 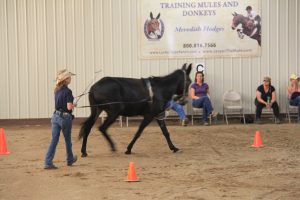 Allie Before the Elbow Pull 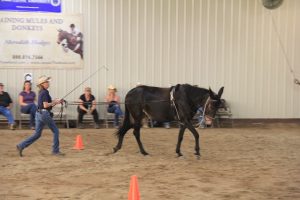 Allie After the Elbow Pull 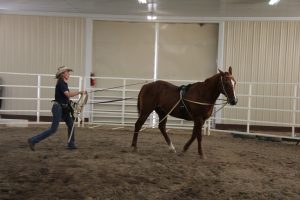 Gunner Before the Elbow Pull 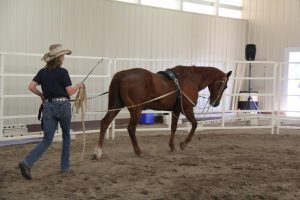 Gunner After the Elbow Pull 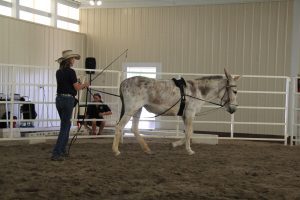 Darlin Before the Elbow Pull 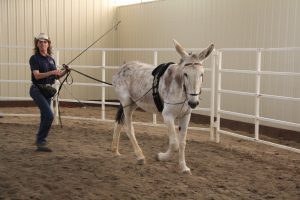 Darlin After the Elbow Pull 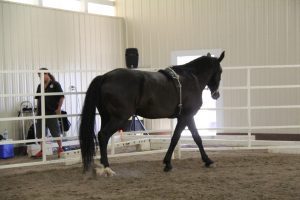 Josie Before the Elbow Pull 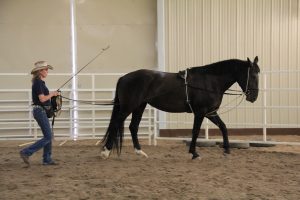 Josie After the Elbow Pull 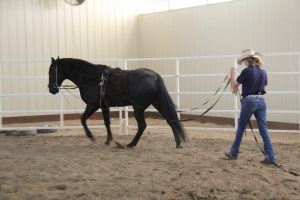 Shiloh Before the Elbow Pull 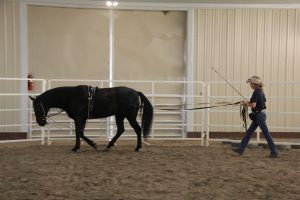 Shiloh After the Elbow Pull