MULE CROSSING: Turns On the Forehand and Haunches 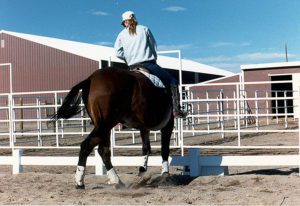 Proper conditioning of the young equine through a carefully sequenced program of gymnastic exercises is essential to the proper development of his mind and body. Spending time cultivating a smooth, fluid forward motion with rhythm and cadence will help him to develop properly and enable him to perform difficult movements more easily. Work with ground rails and cavalletti helps to build muscle, particularly in the hindquarters, which will help him carry your weight more easily through lateral movements, stops and lengthenings. Proper preparation minimizes resistance and frustration which will be apparent by the way your animal carries his tail. You may have noticed after the introduction of a few simple lateral movements, that your equine’s forward motion has become a little shaky again. It is now time to clarify to your animal the connection between forward motion and lateral motion. With his increased understanding of your seat and legs and by using a few simple exercises, this should be a fairly simple process. 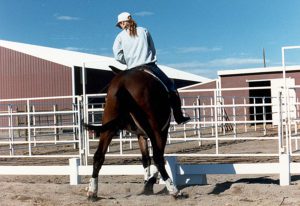 Ask your equine to walk a 20-meter (approximately 60 foot) circle, maintaining rhythm, cadence, proper flexion and bend. Then, in rhythm, change your aids to a slight counter bend and ask for a turn-on-the-forehand, sending his haunches in toward the center of the circle until he is reversed. At the precise instant he is in position to start following the circle in the opposite direction, release your pressure on the reins and send him forward again with your legs onto the new circle in the opposite direction.

You will find that you must hold him back a little with the reins through the turn-on-the-forehand to keep his weight on his hindquarters through the turn, but to maintain the forward motion, it is critical that the release comes at the instant he has completed the 180 degree turn. While executing the turn-on-the-forehand, do not hold back on the reins with steady pressure. 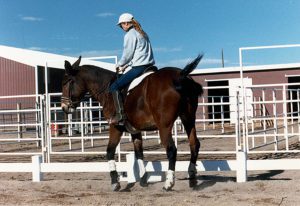 Instead, complete the turn with a series of half-halts with your seat and a squeeze/release action with the reins. If you do this, your final release will come as a natural sequence to the turn and it will be in rhythm and harmony with your equine. You can do this exercise at the walk, trot and canter, slowing to the walk each time for the turn-on-the-forehand.

Next, you will begin to cultivate the turn-on-the-haunches. (Your equine’s lateral work on the Side Pass T-poles will have given him a little understanding of what this is all about.) Again, walk him on a 20-meter circle. Then, when you are ready to make the turn, nudge your equine rhythmically and hard with your outside leg, keeping your weight centered over his body with a passive inside leg. 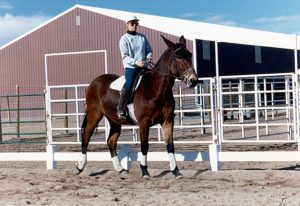 Maintain contact with your outside rein so that his head remains straight, and lead him into the new direction with a squeeze/release action on your inside rein and back it up with a rhythmic squeeze-release from you leg on the opposite side from the leading rein. Be careful not to inhibit his forward motion. It is better that he do small circles to complete the turn than to fall back over his haunches into a reinback. As in the turn-on-the-forehand, nudge and give, squeeze and release—a Longears (mule or donkey) will lean hard against continuous pressure. Keep practicing this exercise, maintaining his body between your aids. 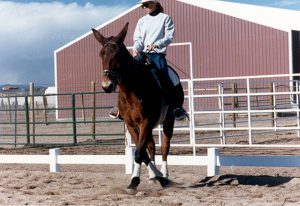 When he does well at the walk, you can move on to the trot and canter, slowing to the walk for the turn.  And even if your equine makes a mistake, remember to praise him for his effort and go on. If you do this, you will find him to be a much more cooperative partner and eventually you will succeed at what you have set out to accomplish.

Once your equine gets his footwork figured out through these turns, and has had the chance to build up his body physically, you can think about increasing the demand for speed and finesse in the turn-on-the-haunches , but that will come much later. To attempt any more than this right now will most likely destroy his forward motion, cadence and rhythm, and will cause much frustration and fatigue. Working a mule along the fence will help him to keep his pivot foot planted throughout the turn. It is an excellent exercise for improving the quality of the turn-on-the-haunches for Reining and cow work, but because of the sensitive nature of the animal and his slow physical maturation, it usually causes too much stress and frustration on younger animals if attempted too early. The equine may even perform well for a couple of years after quicker training, but before long he will sour on the movements. He will anticipate and possibly even
begin to run off with you to avoid doing them. It’s better to take it slow and easy and maintain your rapport and understanding 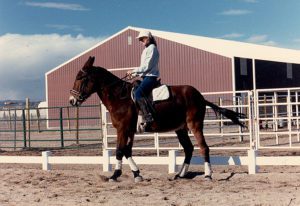 with him. After all, equines that are brought along slowly will generally live a lot longer, so why get impatient and try to do too much too soon? Wouldn’t you rather have a long-lasting and pleasant relationship with a animal that is happy with his work?

Your equine will not require the crimped oats reward while he is under saddle, but be sure to give him plenty of oats BEFORE the ride and then again afterwards to make sure he understands that he has done well. This will assure that his good behaviors will be repeated. When you praise your equine lavishly for successes, and stroke him gently and calmly if he makes a mistake, you will solidify the relationship between you! 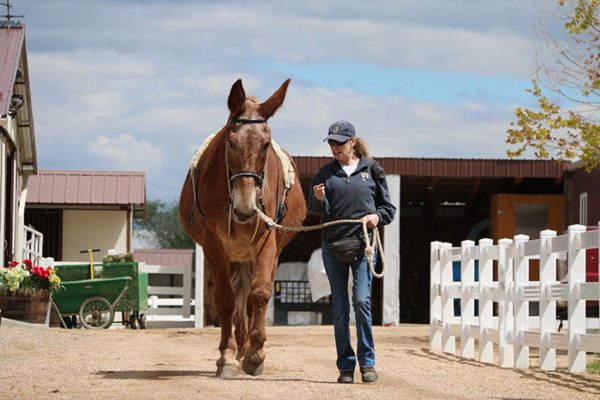 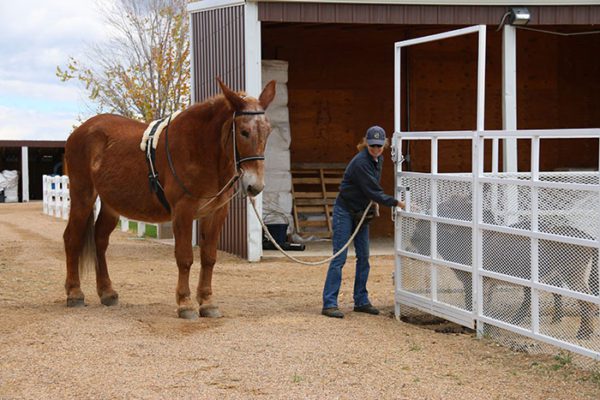 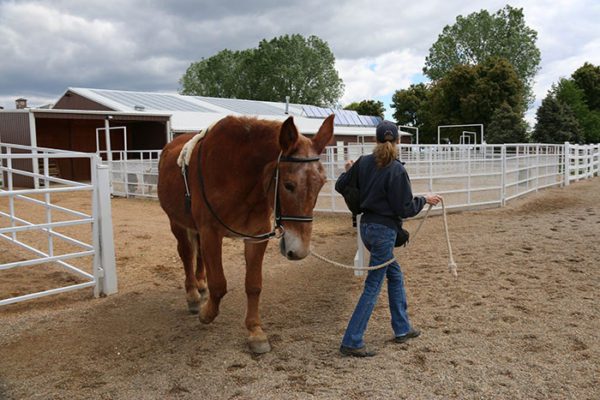 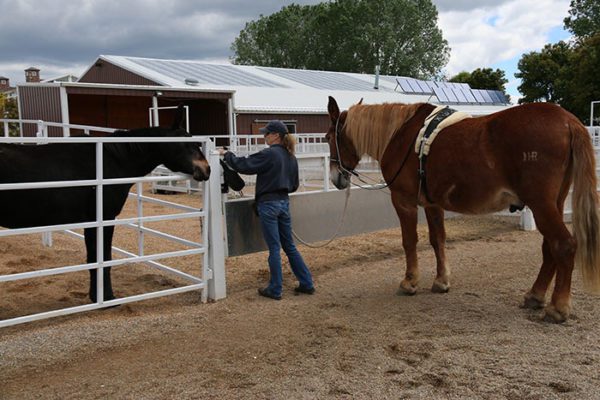 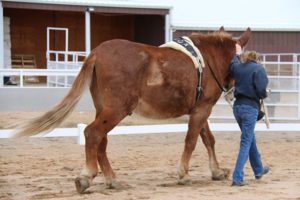 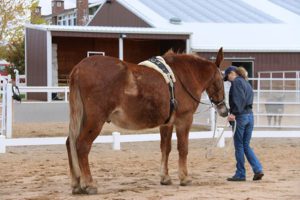 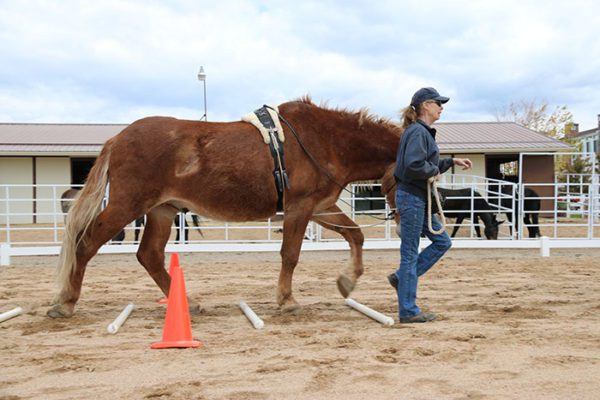 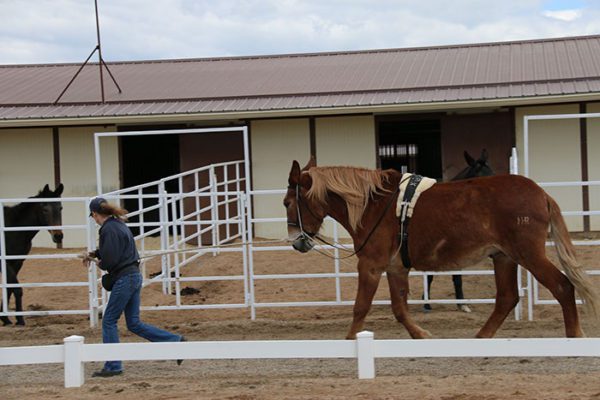 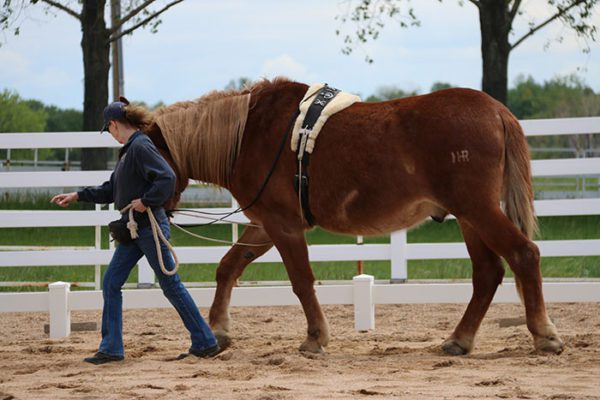 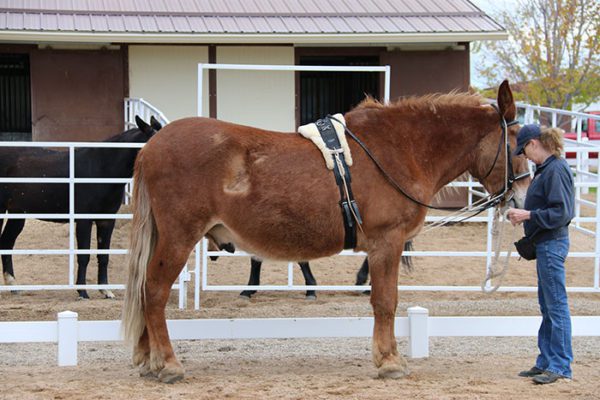 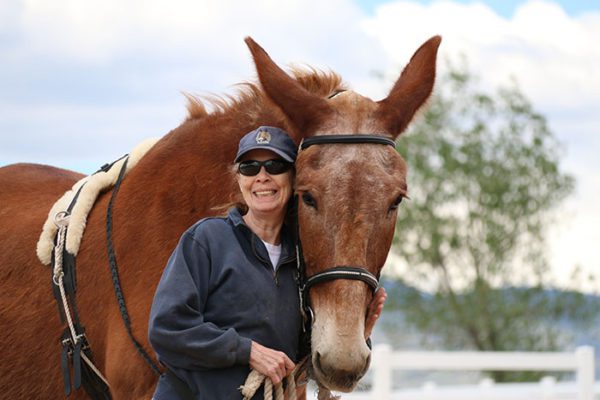