Breaking: The BLM is setting the stage for the slaughter of America’s wild horses

The Bureau of Land Management just issued its long-overdue report to Congress on how the agency plans to proceed with managing America’s wild horse and burro population.

Before I go into more detail, I want to briefly summarize the most troubling aspects of this report and the failed approaches the BLM is advocating for:

There are three major takeaways I want to provide about this plan, and as grim as it sounds, I also want to remind everyone that this isn’t set in stone: We have time to stop it from happening but in order to do so we’re all going to need to get involved.

Takeaway #1: Continuing On A Path to Failure 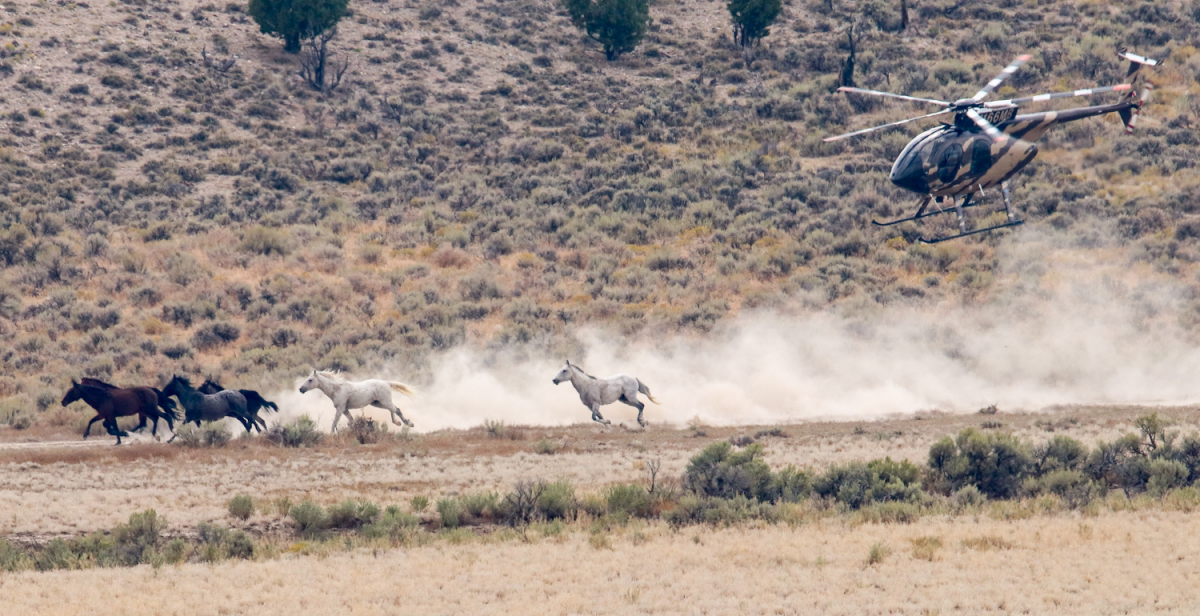 The BLM’s new plan is based on two faulty premises: the need to reduce wild populations to the “Appropriate” Management Level (AML) of 27,000 animals on 27 million acres of land, and the reliance on mass roundups and removals to get there.

Both premises have been discredited by the nation’s top scientific body — the National Academy of Sciences — which concluded that these management levels are “not based in science” and that mass removals are not only ineffective but also counterproductive and unsustainable.

And that doesn’t even take into consideration the massive cost to taxpayers and the cruelty inflicted on these innocent wild horses and burros. Or the fact that this plan, with its astronomically high price tag, is setting the stage for the mass slaughter of these treasured icons.

Takeaway #2: Only Congress Can Require the BLM to Change Course 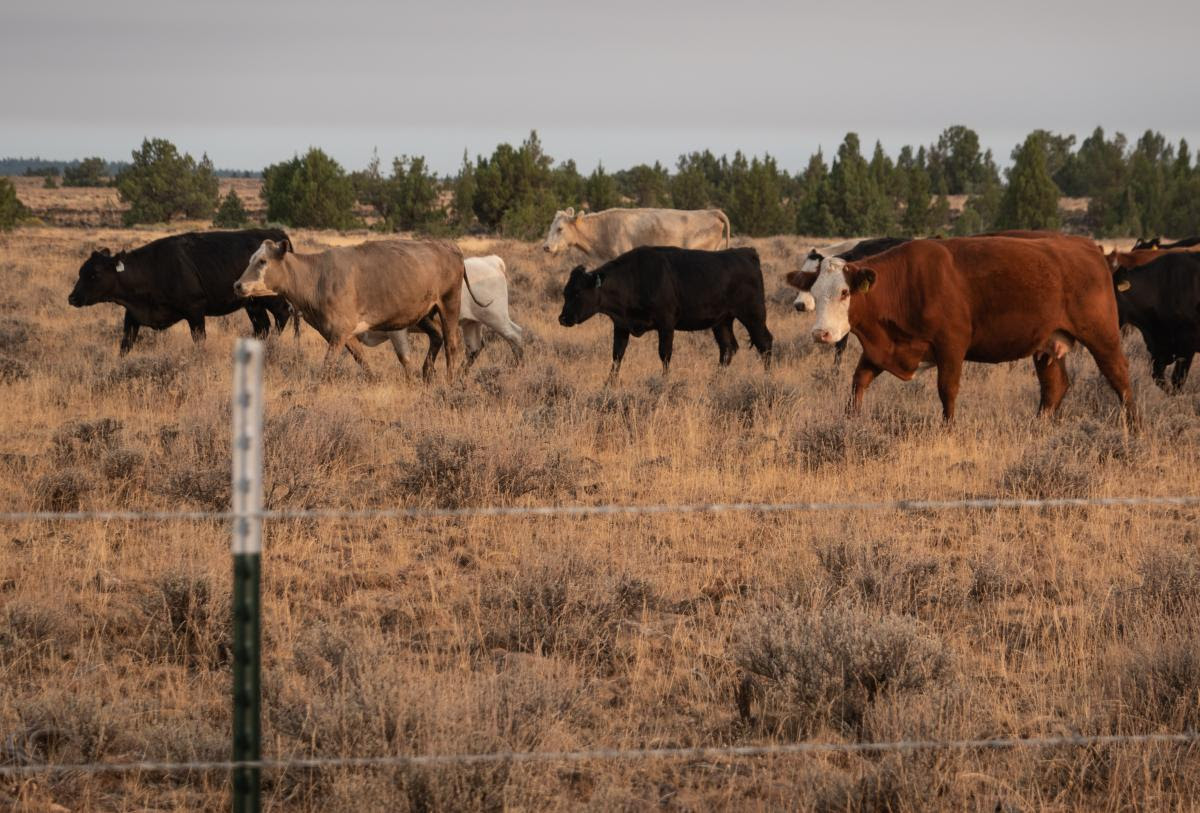 Last year, Congress appropriated a $21 million increase for the BLM Wild Horse and Burro Program, but specified that the funds would not become available until the agency submitted a report to Congress detailing its plan for managing America’s wild herds.The 60-day clock is now ticking and during this time Congress has the opportunity to weigh in on the mass roundup and warehousing plan.

Additionally, the House and the Senate are currently working on the next appropriations bill to fund the government in Fiscal Year (FY) 2021, which begins on October 1, 2020.

The good news is that Rep. Raul Grijalva, Chairman of the Energy and Natural Resources Committee, which has direct oversight over the BLM, has expressed his intent to hold the BLM accountable.

He and several other members of the House and Senate have requested that FY 2021 Appropriations legislation include language to require BLM to utilize humane, reversible fertility control instead of spending all of its funding to round up more wild horses and burros, and to prohibit the agency from cruelly sterilizing wild horses and burros via invasive and risky surgical procedures.

To convince Congress to include this legislative language, we will have to overcome opposition from the Big Ag lobby and Big Humane groups (Humane Society of the U.S., ASPCA as well as Return to Freedom, a wild horse sanctuary), which last year opposed similar language to require BLM to utilize humane fertility control and prohibit surgical sterilization. That means we all need to weigh in now! 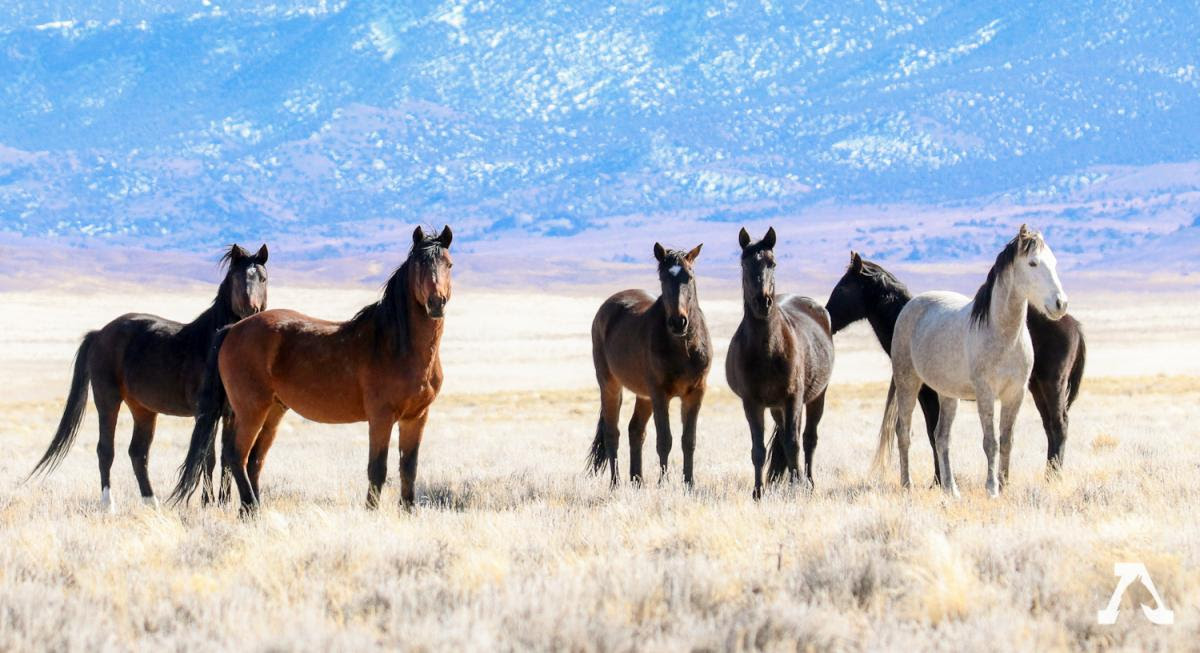 And it’s important to remember that the American public is very much on our side: Nearly 80% of Americans do not support mass roundups or the sterilization of wild mares, and believe that these icons deserve to stay on the public lands they call home.

Through mobilization, advocacy, and public education campaigns, we’ve saved wild horses from extinction and slaughter before. Now, we’re being called to work together to do so again.

Here are two ways you can get involved so we can make the most of this window of opportunity:

P.S. For a more detailed analysis of the plan, click here.

Acting BLM Director William Perry Pendley’s recent declaration of wild horses as the top existential threat to public lands (even though wild horses aren’t on 88% of BLM land!) and his claim that it will cost $5 billion to “solve” the wild horse “problem” is the culmination of a years-long propaganda war against mustangs and burros.

The war is being waged by the commercial livestock industry, which seeks virtual eradication of these cherished animals in order to maximize taxpayer-subsidized grazing of privately-owned cattle and sheep on public lands.

This anti-mustang propaganda war was boosted recently with the capitulation of the Humane Society of the U.S., ASPCA and Return to Freedom to the cattlemen’s mass mustang roundup agenda. 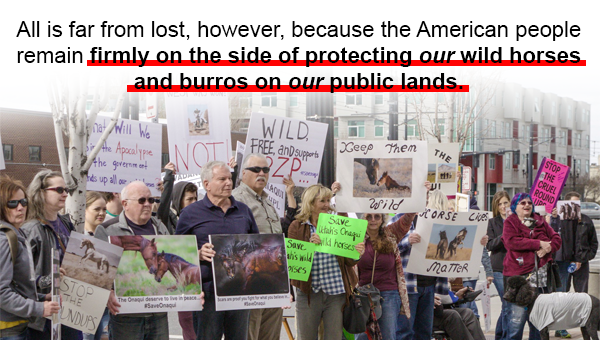 With that in mind, your team at AWHC has been fighting back hard — from the battleground of Nevada to the seat of power in Washington DC — and we want to share some of our most recent work with you today.

Fighting Back at Ground Zero in the Wild Horse War: Nevada

On October 23, we organized a high-profile press conference with Nevada business leaders and a leading conservationist to counter the anti-wild horse messaging at a screening later that evening of the propaganda film “Horse Rich Dirt Poor.” 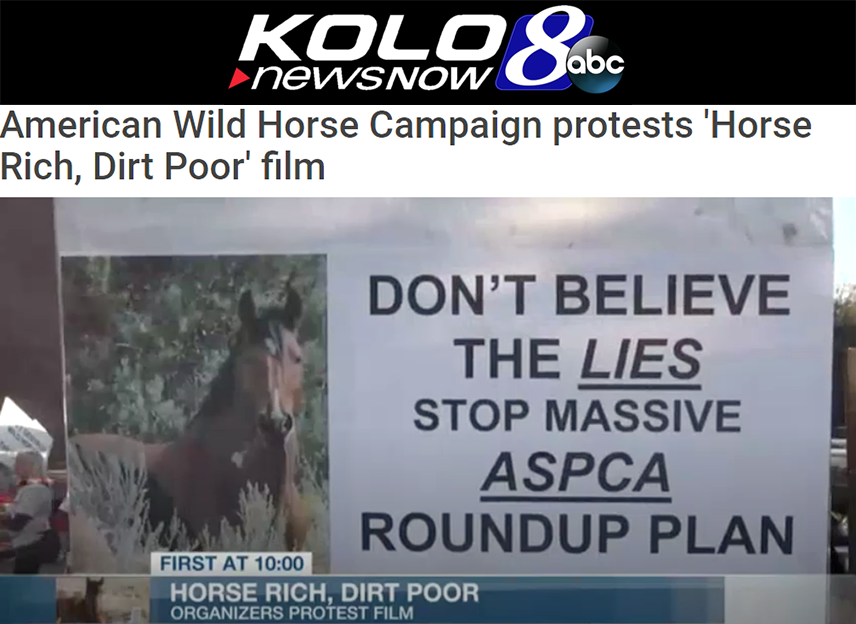 Well known real estate developer and Storey County Commissioner Lance Gilman and Erik Molvar, Executive Director of the Western Watersheds Campaign, struck back forcefully against the scapegoating of wild horses and in favor of protecting these iconic animals on public lands in the West. Read more about this highly successful event here.

AWHC teamed up with our colleagues at Animal Wellness Action and The Cloud Foundation to hold a briefing on Capitol Hill for Congressional staff to discuss the mass roundup plan and its true cost to American taxpayers and the wild horses and burros we cherish. In one of the most successful Hill briefings ever, 35 staffers showed up to learn more about this issue that is obviously of concern to so many of their constituents. You can read more about this event here. 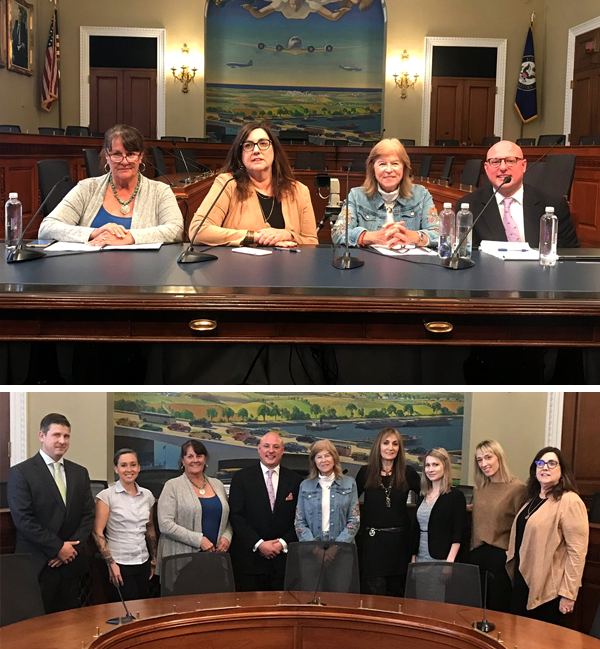 At the same time and a few miles away, the BLM Wild Horse and Burro Advisory Board was meeting — with AWHC staff in attendance to ensure that your voices were represented and heard.

Throughout the meeting, BLM officials and most advisory board members expressed their utter disdain for public opinion, which they dismissed as being “emotional” and “uneducated.” It’s clear where the public stands on the mass roundup and surgical sterilization plan, as our most recent polling documents. At the meeting, we made sure that the voice of the people was not ignored.

Read more about the board meeting here.

From the Virginia Range — where our darters have delivered more fertility control treatments to wild horses in six months than the entire BLM did last year — to the Onaqui Mountains in Utah, where we’re helping the BLM and the Wild Horses of America Foundation expand an existing fertility control program, to the Salt River in Arizona where we work closely with the Salt River Wild Horse Management Group, we’re working every day to keep wild horses wild and prove that humane management work. You won’t want to miss our latest updates from the field here.

We Couldn’t Do This Work Without You!

Our mustangs and burros don’t have a voice — Which is why we’re using ours. If just 5% of you donate to this email, we could clear our monthly fundraising goal and show the BLM that the public proudly supports this important work to keep wild horses and burros wild and free!

From all of us here at AWHC — Thank you for taking the time to read this and thank you for supporting our work.

I have devastating news. The Humane Society of the United States, ASPCA, and Return to Freedom, who made promises to protect horses, just betrayed America’s mustangs and burros.

Today, at the behest of those organizations and the livestock industry lobbyists they allied with, the Senate Appropriations Committee funded a $35 million increase for the BLM’s Wild Horse and Burro Program. The appropriation is part of the Fiscal Year (FY) 2020 Interior Department spending bill unveiled today.

The funds are targeted for implementation of the unprecedented mass roundup, removal, and radical population suppression plan that the groups, along with the cattlemen, support.

We’re ready to fight back.

There are no restrictions on how the BLM can spend the new money. With this nearly 50% increase in the program budget, it’s clear what the BLM will do. Thousands more wild horses will be rounded up with helicopters, ripping them from their families and homes on our public lands. Those who remain free will be subjected to brutal sterilization surgeries that will destroy their wild behaviors and threaten their very lives. The future of America’s wild free-roaming herds will be in jeopardy when populations are reduced to genetically non-viable levels.

Don’t be fooled by the deceptive promotion of the plan as “non-lethal.” The bill language prohibits slaughter for a year, but the plan makes that horrific outcome more likely as holding pens swell with tens of thousands more horses and no guarantee of funding for their safety or long-term care.

But don’t despair. This is a setback, but not the end of the battle.

There’s a long process ahead before this becomes law – if it ever does. Congress may choose to fund the government in FY 20 by passing a Continuing Resolution instead of a spending bill. And the BLM will have many hurdles to cross before accelerating the roundups and implementing inhumane management tools.

That means this fight goes on.

Spirit Keeper Equine Sanctuary will be celebrating the ASPCA® (The AmericanSociety for the Prevention of Cruelty to Animals®) national Help A Horse Day April 22-24. 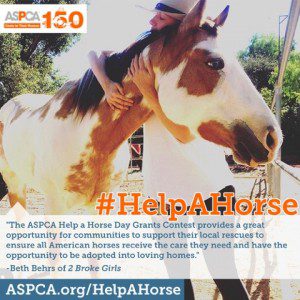 This nationwide Help A Horse Day Celebration is for equine rescues and sanctuaries to raise awareness about the lifesaving work they do year-round to care for at-risk horses in their community who have often been abused or neglected. Horses have been central to the ASPCA’s work since its founding 150 years ago, when Henry Bergh stopped a cart driver from beating his horse, resulting in the first successful arrest for the mistreatment of a horse on April 26, 1866.

In addition to caring for special needs horse at our facility Spirit Keeper Equine Sanctuary has an Equine Re-Homing Assistance Program to help people who are no longer able to keep their horses.

We are currently working with an individual in Montana who because of divorce, loss of pasture land, and loss of employment needs to re-home 10 horses which include working ranch horses, broodmares, and yearlings. Efforts have been made to place the horses in new homes locally however, time has run out and rather than see the remaining horses go to auction and/or end up at slaughter they will be euthanized/put down and buried on their Montana ranchland. In a final effort to avoid this, the horses’ caretaker has reached out to Spirit Keeper Equine Sanctuary for re-homing help. We have agreed to bring the horses to our facility in Colorado and facilitate placing each horse in new homes. To raise money for transport, health certificates, veterinary care, dental care, farrier care, feed, and hay we are holding the following fundraising events during Help A Horse Day on April 22 – 24, 2016.