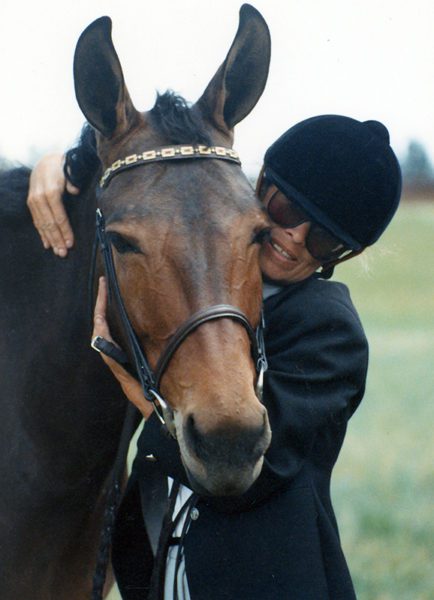 Since our own level of understanding changes and grows over time, we must assume that so does that of our animals, and we must gauge our explanations accordingly. In the beginning, the emotional needs of the young equine are quite different from that of an older animal. They need to overcome a lot of instincts that would protect them in the wild, but are inappropriate in a domestic situation. In this case, our focus must be on developing friendship and confidence in the young animal, while establishing our own dominance in a non-threatening manner.

We do this through a lot of positive reinforcement in the beginning, with gentle touch, reassuring voice, and lots of rewards for good behavior. Our expressions of disapproval are kept at a minimum. As he grows with us, the equine will realize that we do not wish to harm him, and will next develop a rather pushy attitude in an attempt to assert his own dominance – once that he is confident that his behavior is acceptable. When this occurs, we must re-evaluate our reward system and save excessive praise for the new things as he learns them and allow the learned behavior to be treated as the norm, praised more passively, yet appreciated. This is the cultivation of a delicate concept of give and take in a relationship from the emotional standpoint. As in any good relationship, we must learn to be polite, considerate and respectful of our mules, donkeys, horses, ponies and hybrids. After all, as my grandmother used to say, “You can catch more flies with sugar that you can with vinegar!”

From the physical standpoint, there are also a lot of things to consider of both mule and trainer. In the beginning, unless you are a professional trainer with years of proper schooling, you are not likely to be the most balanced and coordinated of riders, lacking absolute control over your own body language. By the same token, the untrained equine will be lacking in the muscle coordination and strength to respond correctly to your cues that guide him to perform certain movements. For these reasons, we must modify our approach to fit each new situation and modify again to perfect it, keeping in mind that our main goal is to establish a good relationship with our equine and not just to train him! It is up to the trainer to decide the cause of any resistance, and to modify techniques to temper that resistance – be it mental or physical. 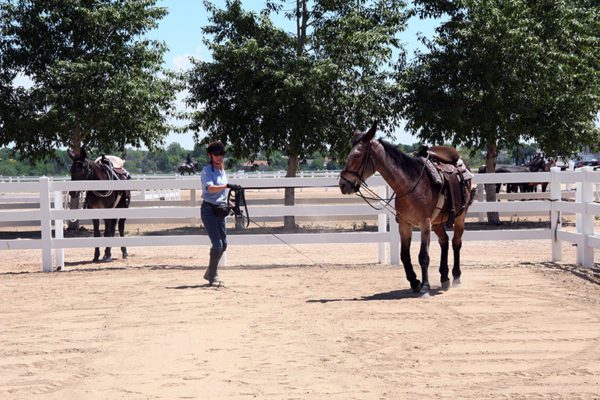 For instance, we had a 3-year-old mule learning to lunge without the benefit of the round pen. The problem was that she refused to go around you more than a couple of times without running off. Assess the situation first by brainstorming all the probable reasons she might keep doing such an annoying thing. Is she frightened? Is she bored? Is she mischievous? Has she been calm and accepting of most things until now? And most important, is my own body language causing this to occur?

Animals are all quite different, as are humans, and each individual will learn in his own way, as do humans. Once in a while, you meet an animal that is not able to learn things in a conventional manner. He perceives things just differently enough to make it extremely difficult. In the case of the mule that would not lunge independently on the line, we found that she needed additional learning aids. You can either put a round pen around the animal to “force” him to comply, or you can wait until he is broke to saddle before you try to lunge him again with just the line. If you only have an arena, you can lunge the equine in the corner and the two fenced sides will help him to stay on the circle. This certainly helped her!

I have worked with many mules that wouldn’t lunge first, but would ground-drive and accept a saddle and rider with no problem. After this they seem to lunge quite easily! Learn to be fair and flexible in your approach to problems as you would for anyone you were interested in getting to know. Be firm in your own convictions, but be sensitive to things that can change and be willing to make those changes as the occasion arises! 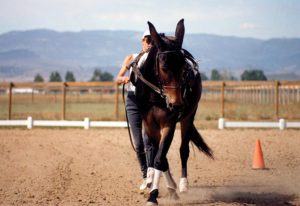 As mental changes occur, so do physical changes. As muscles develop and coordination gets better, the animal will gain confidence. As a trainer, you will need to do less and less to cause certain movements. For example, in the case of the leg yield, you may have to turn your mule’s head a little in the opposite direction to get him to step sideways and forward. As he becomes stronger, more coordinated, and understands your request, you can then begin to straighten his body more with less effort. Granted, we have begun by doing this the wrong way, yet we have put our mule “on the road” to the right way. We have assimilated an action in response to our leg that can now be perfected over time. In essence, you have simply said, “First you learn to move away from my leg, then you can learn to do it gracefully!”

The same concept works in the case of the trainer, or rider. Sometimes you must do things that are not quite right in the beginning to get your own body to assimilate correctness. As I have said, we all perceive things a little differently and it depends on how we are introduced to something whether or not we can understand or perform it. It is nearly impossible for the inexperienced horseman to perceive and control unused seat bones as a viable means of control of the equine. In the beginning, reins and legs are much easier to use to complete such a task. 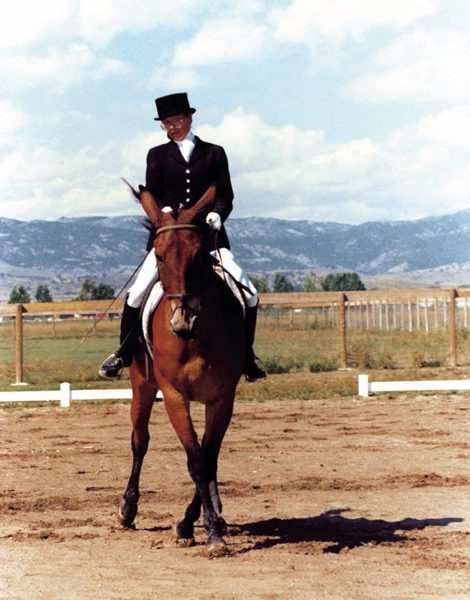 In training horses and mules, there is really little difference in one’s techniques or approach, provided we maintain patience and understanding and a good rewards system. The major difference between these two equines is their ability to tolerate negative reinforcement, or punishment. The mule, being part donkey, does not tolerate punitive action very well unless he is fully aware that the fault was his own and the punishment is fair. For instance, you ask for a canter lead and your mule keeps trotting, one good smack with the whip, or one good gig with the spurs, is negative reinforcement that will bring about the desired response, but be careful of an over-reaction from an overdone cue. More than one good smack or gig could cause either a runaway or an extremely balky animal. This kind of resistance comes from the donkey and requires a much different approach when training donkeys. The horse part of the mule allows us an easier time of overcoming this type of resistance in mules, making them different and easier to train than donkeys.

It is the innate desire of all humans to control their own lives both emotional and environmental. When we cannot, we become panicked and confused about our situation. We doubt ourselves, our abilities, and our self-worth. If we do not maintain a sense of humor about those things that we cannot control and learn to accept that which we cannot change, we are doomed to a life of depression and failure. Horses can be controlled and even some mules can be controlled for the most part, but it is my experience that donkeys are only controlled when they so desire.

Donkeys are affectionate, amicable characters, and possess such a sensitive nature that one would think punishment a real deterrent from bad behavior – but when you punish a donkey, you will be met with a tough hide and unbelievable avoidance behaviors which often cause more resistance than it’s worth! As if this isn’t enough, if you do punish your donkey for something, the next time he even comes close to the same action, he may anticipate your punishment and go straight to the avoidance behavior before he actually makes the mistake. For this reason, it is better to try to ignore the mistakes, focus on the successes and reward the equine with lots of praise. If something in your training isn’t really necessary to your final objectives and you encounter this resistance, such as I did during lunging training, then just drop it and go on to something else that they can do easily. There is plenty of time to learn it at a later date.