“Throughout history, mules and donkeys have been pegged as being stubborn and therefore stupid, but I have found just the opposite to be true. They are intelligent, sensitive animals, and they have a particularly strong survival instinct. They’ll go to great lengths to avoid danger or what they perceive as danger, and the process of training a mule or donkey is the process of earning their trust.” 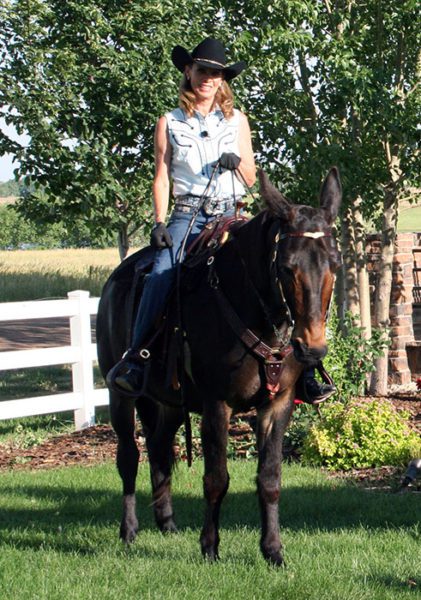 When I began working with mules and donkeys, I quickly realized there would be no shortcuts to successful training. I steered clear of fads, trends and shortcuts and, instead, based my training program on Behavior Modification techniques developed by world-famous behaviorist B.F. Skinner over a century ago. For many years now, I have used these techniques to successfully train my own champion mules and donkeys, and I continue to share my method with millions of people through my books, an award-winning DVD series, multiple television shows, my comprehensive website and on Social Media.

The techniques presented here work well with not only mules and donkeys, but also with horses and any other trainable animals (and even humans). The program is designed to be resistance free, and the goal is—and always has been—to help people get the best performance and most enjoyment from their animals and to insure that the animal receives the best treatment possible.

As a young adult I worked as a psychiatric technician at Sonoma and Napa State Hospitals in California, and the Behavior Modification techniques I learned at that time proved ideal for my later equine training purposes for two major reasons:

˚The system in which the trainer sets performance goals and rewards positive behavior leading to achievement of those goals encourages “good” behavior instead of using fear-inducing punishment to suppress “bad” behavior.

˚The step-by-step approach that builds gradually on learned skills gives the animal a sense of security and achievement that encourages trust and helps minimize resistance. 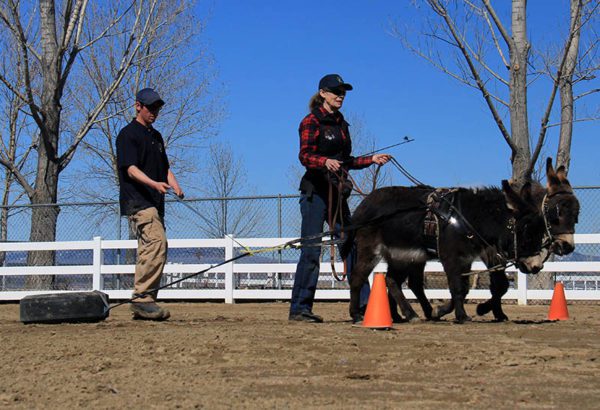 Animals, like humans, need a predictable routine in order to learn. Just as children progress through grade school, building on their knowledge with each successive grade, animals learn best when a solid foundation is laid for each new skill. By creating a logical program from the outset, we avoid the confusion that can lead to resistance.

These levels of achievement are at the heart of Behavior Modification as a training tool. Acceptable levels of behavior must be defined at each level of training, beginning with the simplest of expectations and working forward. At each level the animal must accomplish certain tasks, and each accomplishment must be acknowledged and reinforced. Also note that it is critical—especially if you are working with a mule or donkey—that you, the owner, participate in the training process. Mules and donkeys develop a strong bond with their trainer, and if they’ve learned from someone else, their performance for you may suffer in the long run. It is also advisable to consult with an experienced trainer in your area, and if you are working with my Training Mules and Donkeys training series, I am just a phone call away. 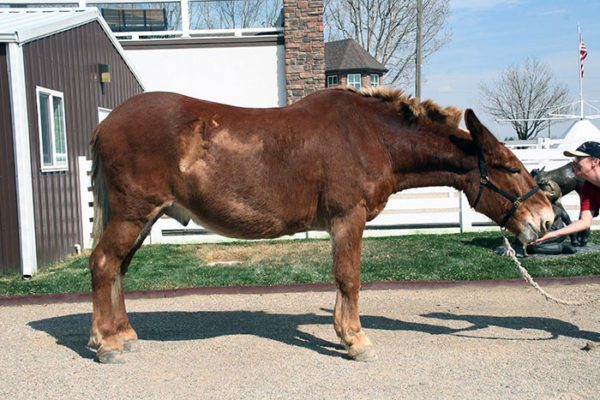 Everything we do, every behavior we choose, is based on an instinctual desire to experience pleasure and avoid pain. Our choices reflect our experience. They are “reinforced” by the pain or pleasure they have given us in the past. Behavior Modification uses the same principles of positive and negative reinforcement with an emphasis on positive reinforcement.

In training, positive reinforcementis delivered in the form of rewards. We know that an equine, when rewarded for performing a certain task, will be willing to perform it again in anticipation of another reward. Note, however, that positive reinforcement is not bribery. The reward is not given as an inducement to perform the task, but as a reward for a task completed. The reward should be something the animal loves and will consistently work for, yet something that is nutritionally sound. In the case of equines, rolled or crimped oats work far better than rich snacks full of empty calories and are healthier for your equine. 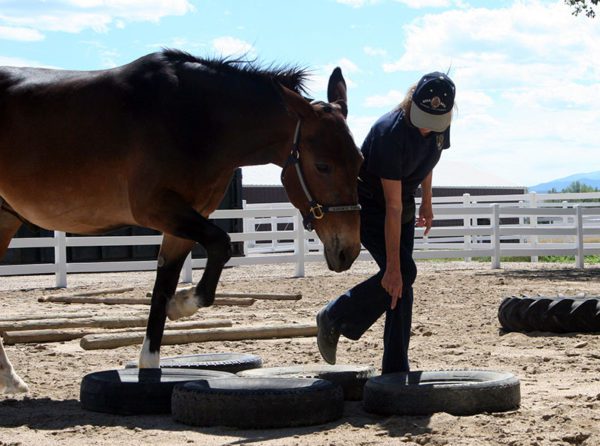 Positive reinforcement also takes the form of verbal cues. When your animal performs the desired behavior, you should, simultaneously and with appropriate enthusiasm, say the word, “Good!” This works well when it isn’t possible to give a food reward right away. Clicker training, which has become a popular and effective means of audible reinforcement, is similar and applies the same concept. It’s immediate, it’s consistent, and it can be used with all mules, donkeys and horses to reinforce behavior. However, I feel that it is better to use your voice than a clicker, as the sound of your voice promotes engagement with your equine on a more intimate level, so your voice will yield better results than clicker training. 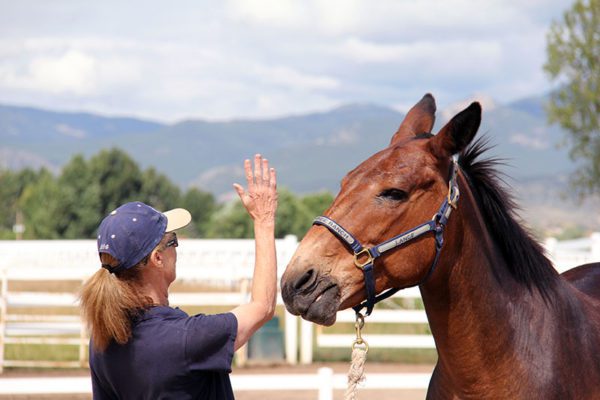 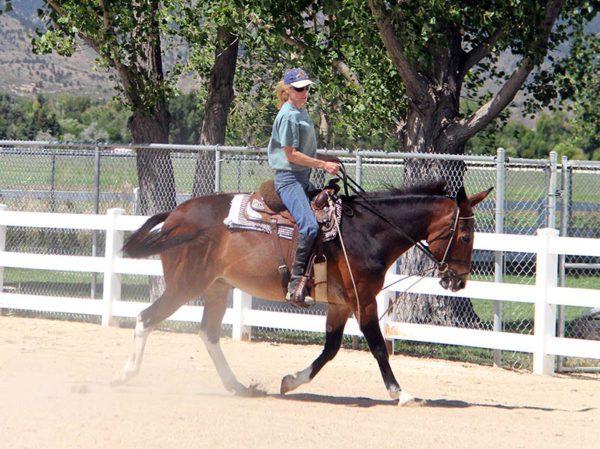 As your equine learns certain behaviors, you can reinforce the learned behaviors less frequently and focus on frequently rewarding new achievements. Gradually, your animal will become satisfied with a verbal reinforcement for established behaviors, and he will comply for longer periods between food rewards. This shift from a predictable, or fixed, schedule of reinforcement to a variableschedule helps with skill progression. For example, in the transition from lunging when your animal was initially given a reward after each set of rotations in the round pen, to riding, he can eventually be ridden through his entire 30 to 40 minute session before receiving a reward.

Beware of the “delayed gratification” phenomenon, however. If your animal suspects that it will be too long before he receives a reward, he may be reluctant to even begin. Often a quick reward for a simple task at the beginning of a lesson is incentive enough to get him started. Also keep in mind that reinforcing too soon is ineffective. Your animal should be rewarded immediately after the correct behavior, not before. An animal rewarded too soon or too often can become aggressive and/or resistant to training. Remember, each of your own behaviors elicits a response from your animal. You must be meticulous in the way you ask your animal to perform, and always be aware of your own actions. In Part 2 of Introduction to Behavior Modification, I will explain how to break complex behaviors into small and simple steps to achieve the best results.