In Part 1 of Introduction to Behavior Modification, we addressed the steps involved in employing the reward system of training properly whereby desired behaviors are rewarded promptly and negative reinforcement is quick, fair and used sparingly. In Part 2, I will explain how to break down more complex movements into smaller steps that are simple and easy to accomplish, and then how to string them together in order to get the desired response from your equine. 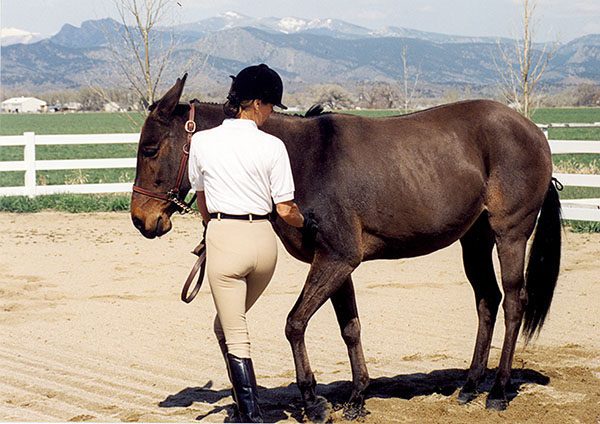 Eventually, your animal will complete as many steps as you desire and, at the same time, learn to cross one foot over the other and only do as many steps as you ask. B.F. Skinner describes shaping behavior as a response that must first occur for other reasons before it is reinforced with a reward and becomes an operant or “action of choice.” A complex response such as executing the entire turn all at once would never occur naturally correct to be reinforced if you simply “turned the animal around.” He could not possibly understand that he must place the pivot foot before the turn is executed, and would most likely just “swap ends,” with no pivot foot placement and no finesse to the turn. However complex responses can be shaped by separately reinforcing their component parts. Then these parts can be put together in the final form of the operant or “desired action.” 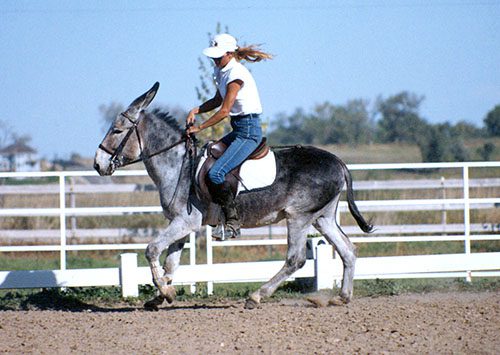 An example of shaping a behavior by breaking it down into a string of very small steps is how I taught my donkey, Little Jack Hornerto canter. Although many people tried to tell me that donkeys don’t canter, I had seen donkeys canter when they ran free, so I knew it was possible. First, I set the goal of cantering a circle. No one could run ahead of my donkey fast enough to reward him with oats and negative reinforcement such as the crop didn’t work well at all, so I had to find another kind of reinforcement. Using the pleasure principle of finding the best motivation for an action, I put my cycling broodmares into a pen at one end of our hayfield and I took my jack to the other end. When asked to canter toward those mares, he did so eagerly. He first learned to canter in a straight line. I reinforced the action verbally with, “Good, good,” while we cantered, and then I gave him a food reward once we reached the pen. 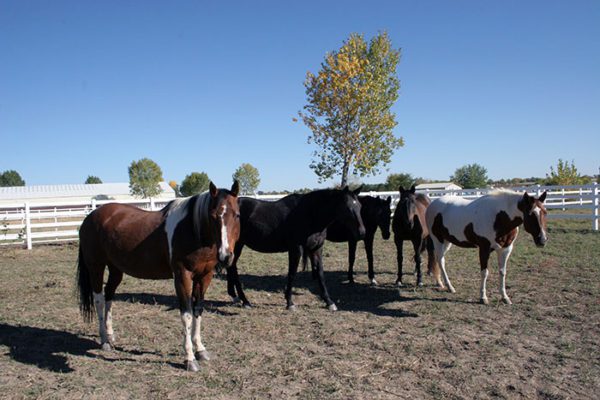 The next time I did the same thing, but this time I turned my donkey in a large half-circle route to the pen, and I rewarded him again the same way. The third time, I asked for a little more of a circle and I got it. Several times later, I was able to get an entire circle before we ran the line to the pen with the mares in it. Once my donkey learned that he could canter easily with me on his back, I didn’t need the mares anymore.

I took Little Jack Hornerinto the arena and tried to canter the perimeter with him. At first he cantered a few strides and then dropped to trot. Each time he cantered, I praised him verbally, and when he broke to trot, I would finish the circle, stop him and praise him with the food reward. It was slow going the first few tries, until I started counting strides and realized the jack was adding one more stride at canter with each attempt. Before long, he was cantering the full circle with ease on command. 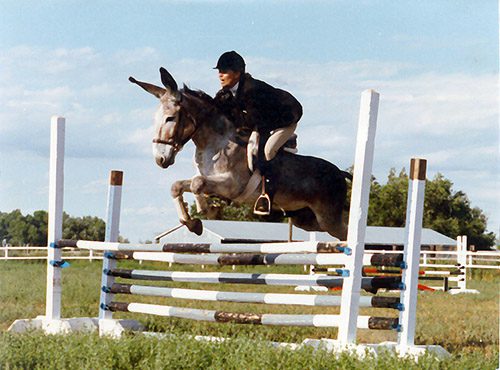 With training like this, my donkey jack, Little Jack Horner, has performed successfully in Trail, Reining (with spins, slides and flying lead changes), Second Level Dressage and even performed at Bishop Mule Days where he jumped four feet in exhibition —quite remarkable for a 13-hand equine, and a donkey no less!

The Ten Principles of Behavior Shaping

1) Establish and raise your performance criteria in increments small enough to give your animal a reasonable chance of success and create an opportunity for positive reinforcement. If the criteria are too challenging, the animal may fail and give up. 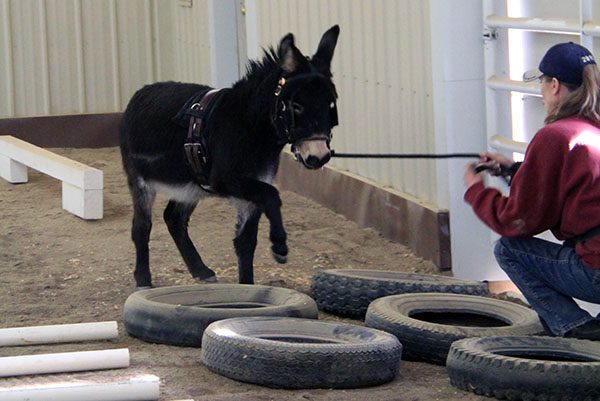 2) Train for one aspect of a behavior at a time. Do not try to teach several skills at once. When training for a dressage test, for example, do not practice the whole test every day. Take a few sections of the test and work on those. Practice going up and down the centerline in straight lines. Practice 20-meter circles. Practice going deep into the corners of the arena with the right amount of bend. Shape the ultimate result by gradually linking the components, and they’ll fit together nicely. Ride the test as a whole, and the quality of the smaller components will suffer. 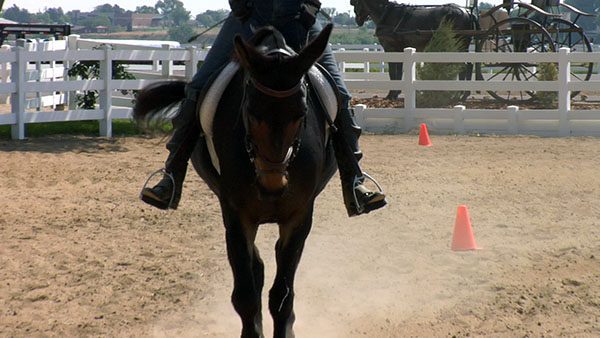 3) Before you move to a new skill, put the current skill or behavior on a variable level of reinforcement. Use a fixed schedule of reinforcement on any new behaviors, rewarding verbally and with oats each time the behavior is performed, but once the animal “gets it,” reward less often and randomly. Then, as you add a new behavior, reinforce that behavior on a fixed schedule, while randomly rewarding learned behaviors. 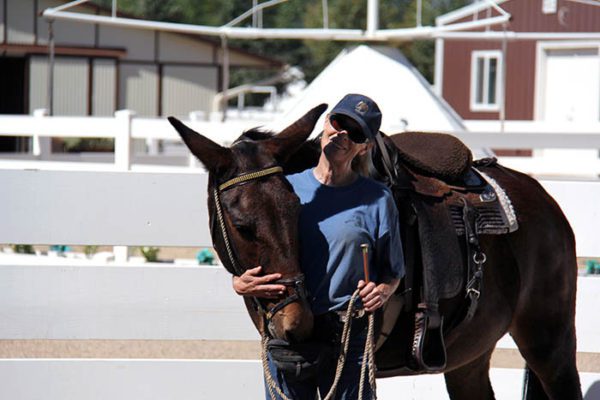 5) Stay ahead of your trainee. Be prepared with what you will ask next, in case your animal has a sudden breakthrough and easily performs the next step. You must keep your equine challenged in order to maintain his interest.

7) If one shaping process is not working, try another. Individuals, whether animal or human, learn in different ways. Continue with the premise of reinforcement, but find what works best for your animal at any given stage. For example, if you cannot get your equine to back through barrels in a figure eight, simply begin by going forward and always start between the barrels to allay any fears he might have of them. 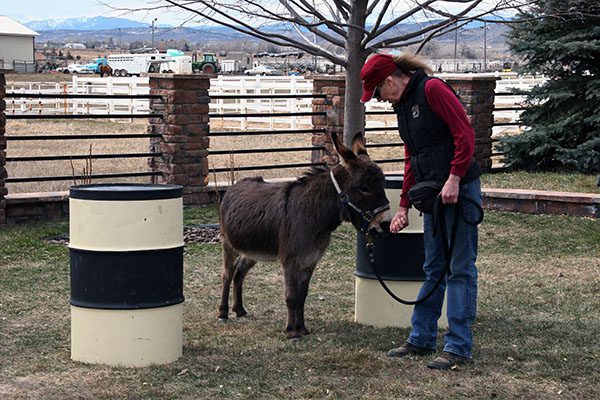 8) Do not interrupt the training process without cause—this constitutes a punishment. When you are training, try to avoid interruptions. When you train using the methods of behavior modification, you are obliged to reinforce the good behaviors. If you aren’t paying attention, you may inadvertently punish a desired behavior if you interrupt it. The most common example of an infringement would be talking to someone while you are training the animal. If you must talk to someone, simply include the equine in the conversation. 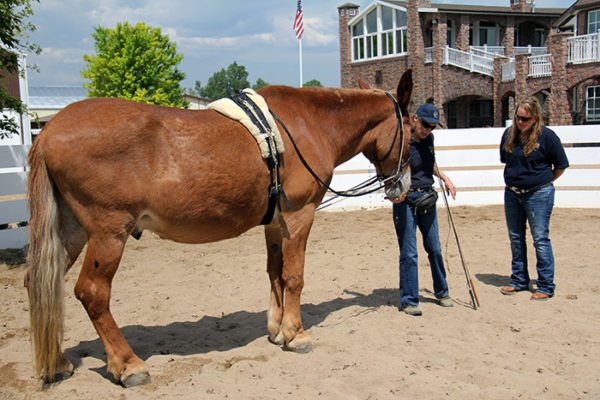 9) If a learned behavior begins to deteriorate, simply review and use fixed reinforcement until it is re-established. Sometimes side effects from negative reinforcement can cause this to occur, but if you remain calm and patient, the animal should relearn quickly.

10) Quit while you’re ahead. At the beginning of the each session, you will likely see improvement from where you were at the end of the session before. Drilling on a desired behavior will make the animal tired and less willing to perform. Better to quit with a good assimilation of the requested behavior, and work to refine it in subsequent sessions.

The Road to Success for You and Your Equine 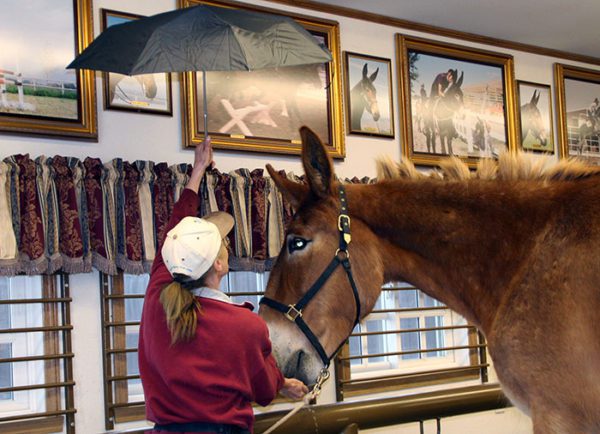 As you begin to understand the principles of shaping and modifying behaviors, it is important to realize that it is a lot like dancing, cooking or any other learned skill—the only way forward is with practice. The more you practice, the better trainer you will become. You have the opportunity to practice positive reinforcement every moment of your life, reinforcing behaviors in everyone—the cat, the dog, your husband or wife, your children. It becomes a game of noticing and praising positive accomplishments while setting clear boundaries to all behaviors, large or small. With practice, you will increase your awareness and, thus, your skill. The success or failure of your efforts to shape behavior in any animal does not depend upon your expertise, but on your patience, respect, consideration and consistency during the process. This may not be the easiest way, but it is extremely effective—and it’s fun!