We are BACK ON AIR! Help us keep this commercial live >>

Apologies if this is the second time you are receiving this email, we just want to make sure you’ve received this important message. If you have already donated, thank you for your support!

Meredith: It’s official — Our national campaign has launched and our television ads are on the air! Watch our campaign ad here and then help us keep our commercial live as we broadcast it nationwide with a donation now. >> 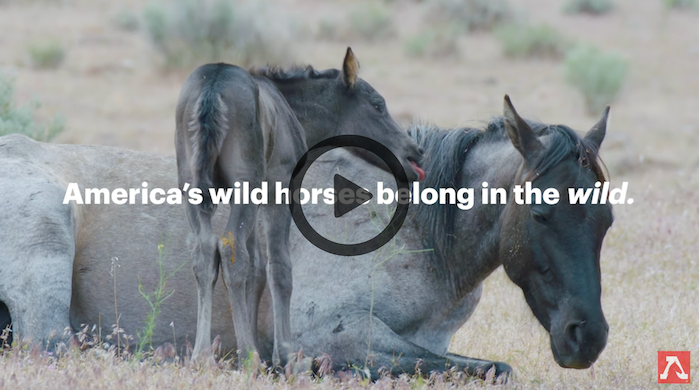 Right now, Bureau of Land Management (BLM) and Forest Service helicopters are descending on wild horse herds in Oregon, Nevada, California, and Utah, chasing these innocent animals sometimes to the point of exhaustion with the ultimate goal of removing more than 2,700 before the month’s end. This will bring the total number of wild horses and burros captured this Fiscal Year close to a devastating 19,000.

We refuse to sit by as the BLM targets these cherished animals for removal — it’s why we’re fighting around the clock in courts, in the field, and on the Hill to defend the freedom of our beloved mustangs — and now, we’re taking the fight to TV screens across the country.

Earlier this year, we launched an ad campaign in Colorado demanding an end to the brutal roundups occurring in the Piceance Basin. The results were better than we could have expected — online, our ads received over 250K views reaching 1.5 million people, over 188K Coloradans were made aware of the tragedies happening to wild horses right in their backyard, and over 20K wild horse advocates joined us in calling for an immediate end to the roundup.

If we’re going to stop the BLM’s plan to slash wild horse and burro populations to near extinction levels, we need Americans across the country to stand up and speak out for our beloved herds. But first, we need to make every citizen aware of this fight, and that’s exactly what we’re planning to do — starting with our biggest national campaign on TVs everywhere.

Meredith: It’s time for American taxpayers across the West and across the nation to know exactly what their tax dollars are going to. There is a better way to manage our wild horses and burros to keep them safe, free, and in the wild — where they belong.

Please, rush a donation today to keep our national campaign on TV screens across the country as we work to educate the nation and protect the livelihood of America’s wild herds. >>