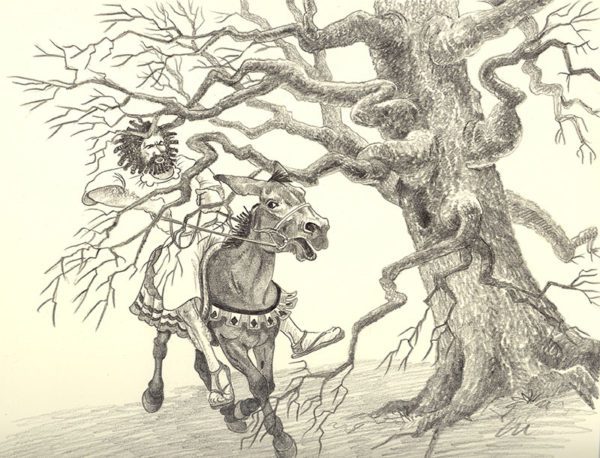 Many people ask me when the first mules appeared on this earth. Historically, mules have their roots in the Bible. Contrary to the popular belief that mules are so lowly and stubborn that they would have to be the mount of serfs, they were—in the beginning—the mount of kings!

“So Zadok the priest, and Nathan the prophet, and Benaiah the son of Jehoiada and the Cherethites, and the Pelethites, went down and caused Solomon to ride upon king David’s mule, and brought him to Gihon.” (I Kings 1:38)

Another Bible passage recounts how Absolom, the son of King David, had a rather unfortunate encounter in which he was clunked on the head by a tree branch while his mule, using common sense, ducked underneath. Those of us who know and love mules can certainly relate to their ability to instill humility in their human counterparts, and everyone can appreciate that, even back then, mules were noted for their completely natural and indubitable humor. 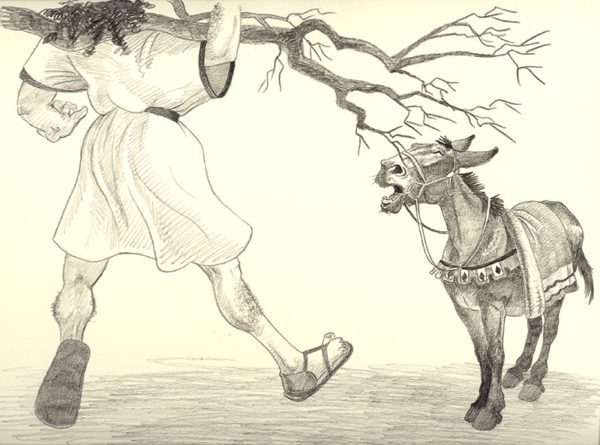 “And Absolom met the servants of David. And Absolom rode upon a mule, and the mule went under the thick boughs of a great oak, and his head caught hold of the oak, and he was taken up between the Heavens and the earth, and the mule that was under him went away.” (II Samuel 18:9)

Mules are not only psycho-therapists, but they are the true geniuses of slap-stick humor! When you get into an altercation with a mule, you will seldom get hurt, but you will surely be set straight in a most humiliating way.

“And when the ass saw the angel of the Lord, she fell down under Balaam and Balaam’s anger was kindled, and he smote the ass with a staff. And the Lord opened the mouth of the ass, and she said unto Balaam, ‘What have I done unto thee, that thou hast smitten me these three times?’ And Balaam said unto the ass, ‘Because thou hast mocked me, I would there were a sword in mine hand, for now would I kill thee.’ And the ass said unto Balaam, ‘Am not I thine ass, upon which thou hast ridden ever since I was thine unto this day? Was I ever wont to do so unto thee?’ And he said, ‘Nay.” (Numbers 22:23) Mules and donkeys will always be compelled to let us know when our actions are careless and thoughtless—it is in their nature. Whether or not we choose to listen and alter our approach is entirely up to us. 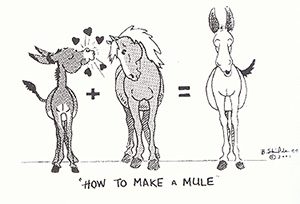 The highest intelligence residing in animals is that of the mule. He inherits athletic ability and “horse sense” from his mother, the horse, and incredible wisdom and strength from his father, the jack. Perhaps the kings of yore finally tired of being publicly humiliated by their superior mules, or perhaps they just couldn’t muster the patience or humor to deal with them anymore, but mules were eventually replaced by horses as the mount of choice, and were subsequently used primarily for packing and draft work.

Strong and durable animals, mules also played a significant part in Greek and Roman transportation. The mule can travel more than three mph and can easily cover 50 miles in a day. Their usefulness is unmatched, even by oxen, as they can cover more distance much more quickly.

The mule’s ability to survive is truly uncanny, given that he is the hybrid offspring of a jack and a mare and does not produce offspring. On rare occasions, mare mules (or mollies) have been known to reproduce by a jack or stallion, but for the most part, mules are sterile and cannot propagate themselves. 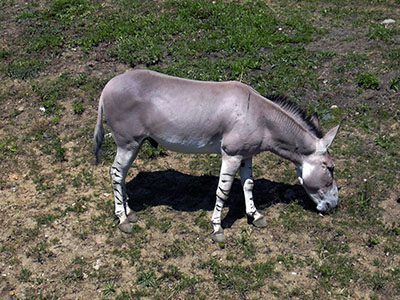 There is a volunteer organization in Israel called HAI-BAR, (an Israeli word meaning “wildlife”). This organization was established to protect animals that had thrived in the Holy Land during the Old Testament years, but that are now dangerously close to extinction, due to reckless use of land resources. HAI-BAR South, established in 1964, opened 3000 acres to the general public in 1977 for the express purpose of protecting herds of wild species from Biblical times. A second reserve, HAI-BAR Carmel, was established in the center of Israel near Haifa on Mount Carmel, where 2000 acres were fenced off to accommodate and protect even more Biblical animals. These reserves are still in operation today.

The closest ancestral link to the mule is the Somali Wild Ass, found in Northeast Africa. Only a few were still living in the Danakil Desert of Ethiopia when a number of them were captured and brought to HAI-BAR, where they began to once again propagate. The Somali Wild Ass has incredible strength for its size and subsists on desert shrubs as its only food. This explains why our modern-day mules and donkeys can stay healthy and strong on much less feed than today’s horse requires. 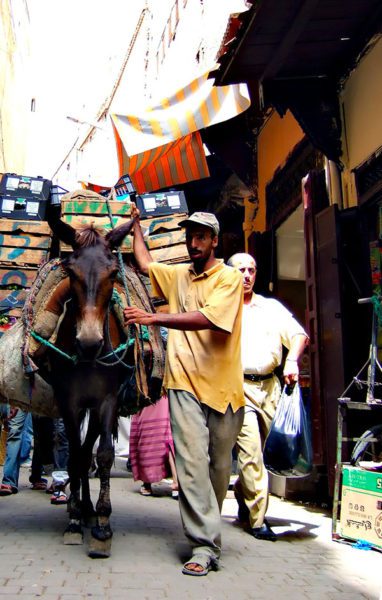 The unique personality traits of the mule come from the ass. Unlike horses, mules are naturally curious, but are also suspicious and require time to size up a situation before acting. For this reason, it usually takes time for people to warm up to mules and time for mules to warm up to people. Because their judgment of people is unmatched, it is wise when buying a mule to allow him to pick you! A lot of the mule’s so-called“stubbornness” is really a sense of self-preservation. If he has a negative experience, he is not likely to repeat it. His memory serves him well and he never makes the same mistake twice. For this reason, it is important that the personality of the mule and his handler are compatible and that they actually like each other.

The old myths, “stubborn as a mule,” and, “a mule will wait for the opportunity for revenge” are just those…myths. I would suppose these opinions arose from those who were probably impatient when dealing with mules. When left to their own devices, mules will learn from their experienced peers and from those who truly care about them. And people who are confrontational with mules will meet with undeniable stubbornness and resistance.

It makes sense that mules and donkeys have become so economically important to Third World countries. They are generally sedate, humble and hard working animals with an intelligence that enables them to learn their job quickly. They can go anywhere man can go, and do the work of many at far less expense—which is more than can be said of any motorized vehicle. Mules and donkeys are still an important part of third world economies. There are educators from The Donkey Sanctuary in Great Britain and other sanctuaries who visit these emerging countries, with the expressed purpose of teaching people how to work more efficiently with their longeared counterparts, since the very existence of many third world nations depends upon this partnership.