As we track mules through history, we find there is a reoccurring theme that paints the mule as both a companion and adversary of man. Those of a certain temperament seem to be able to befriend the mule and those who would be combative suffer at his mercy. Man would rather blame stubbornness on the mule than to claim this stubbornness as his own. Clearly, there is no doubt that the mule is and always has been a hard-working and valuable beast of burden throughout history. His ability, intelligence and judgment are unmatched. 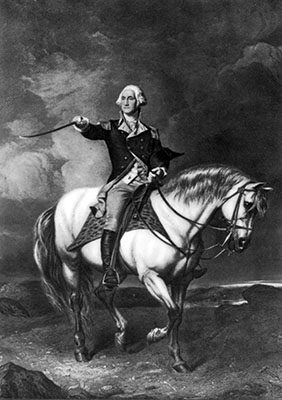 George Washington was a fairly well educated man and, “the copybook which he transcribed at fourteen years of age a set of moral precepts or Rules of Civility and Decent Behavior in Company and Conversation was preserved.” Practical experience was the foundation for his best training in outdoor occupations and not books. He was a successful tobacco and livestock farmer early in his teens and mastered the art of surveying to plot the fields he inherited. It is no accident that George Washington became not only the father of our country, but also, the first organized mule breeder in America.

George Washington tried to buy some Spanish donkeys to use for mule breeding at Mount Vernon, but found that their exportation from Spain was against the law. Most who have studied mules and donkeys know that King Charles III of Spain then gave Washington the gift of an Andalusian jack and two jennets from Malta. The jack, named Royal Gift, became the foundation sire of Washington’s farm at Mount Vernon and he popularized mule breeding for farm work. Blending the Andalusian and Maltese donkeys produced finer donkeys than those that had been imported for still better quality mule production. Eventually, the law in Spain was changed. George Washington was not the only one who recognized the economical value of mule and donkey power for the growth and prosperity of a new empire. Henry Clay and others began importing numerous donkeys and breeding for mule stock.

George Washington was not devoid of the sense of humor needed to work with mules and donkeys. In a 1786 letter to a neighbor concerning Royal Gift’s failure to perform stud service (as can often happen with donkey jacks, as they are quite particular about their “ladies”), Washington wrote, “Particular attention shall be paid by the Mares which your Servant brought and when my Jack is in the humor they shall desire all the benefits of his labours—for labour it appears to be. At present, tho’ young, he follows what one may suppose to be the example of his late royal master, who cannot, tho’ past his grand climacterick, perform seldomer, or with more majestic solemnity, than he does. However, I am not without hope, that when he becomes a little better acquainted with republican enjoyments, he will amend his manners, and fall into a better & more expeditious mode of doing business. If the case should be otherwise, I should have no disinclination to present his Catholic majesty with as good a thing as he gave me.” 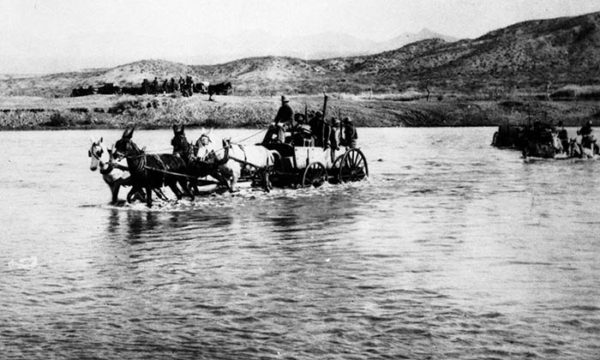 Respect for donkeys and mules is the only way to motivate them to action. Their rugged individualism will tolerate no less. The mule exemplifies the “All-American,” as set forth by the colonists. The colonists were thought to be stubborn in their quest for individual freedom by the British Crown that super-imposed itself upon their individual liberties. Like the colonists, mules will challenge anyone who challenges their individual liberties! It is only fitting that the mule would be fully revered and appreciated by a man of such distinction as George Washington.

In 1803 Thomas Jefferson completed the Louisiana Purchase. “Over the next 75 years, more than two million square miles revealed their secrets to an army of hunters, soldiers, naturalists and other adventurers.”

While perusing the pictorial archives of history, you will see that men and their partners, wives, children, dogs and horses were always front and center. But what about their mules? You read about their many perils and victories, but you rarely hear mention of the one humble animal that worked silently, relentlessly in the background—the mule.

In May of 1804, after the official transfer of the Louisiana Purchase, Lewis and Clark began their expedition up the Missouri River. They soon learned to despise the muggy territory, with its humid climate populated by numerous mosquitoes, gnats and other creatures. Even their dogs would howl in pain from the intrusions of this unexpected onslaught. Conditions were tough and it was not unusual for mules and donkeys to be used as pack and draft animals in this rough country. Desert-born donkeys and the hybrid mule are born with the characteristics necessary to endure such strenuous conditions. They are stronger and sturdier than the horse. They require less to sustain good health, need less water and are more resistant to parasites and disease. Without mules and donkeys, the westward migration would have been much more difficult. 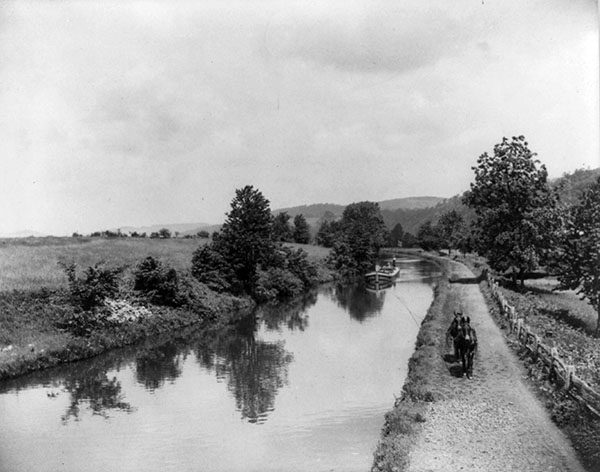 The Erie Canal was the longest canal built in the shortest amount of time for the least amount of money. It had continued success for many years because of the use of donkeys and mules to pull the barges along the tow path. “In the annals of the Erie Canal, we find little credit given to the mules; yet, by virtue of their strength and endurance and sagacity, the western wheat reached New York City in due time and industrial products moved west.”

The mules plodded slowly along the canal, pulling the heavy barges of goods, as did the “mule drivers,” who were most often young boys. Occasionally a mule would fall into the canal, but it was quickly and safely guided back to shore by the lead around its neck. Where the walls of the canal were too steep to climb back out, the villagers installed ramps at intervals along the canal to serve as an easy escape from the water, should the mules fall in. These ramps were covered with a heavy planking containing thick slats, or “cheats,” where a mule could get traction coming up the ramp. In the off-season, the planking could be removed and held over for the next season. 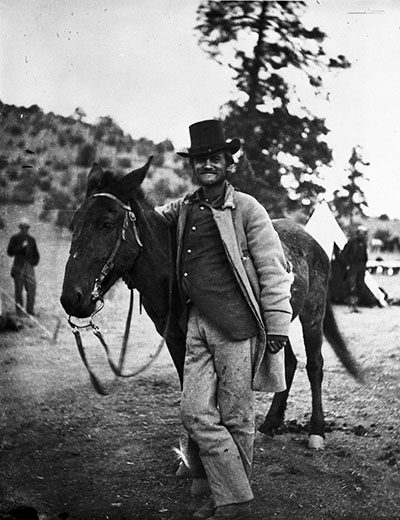 George Washington wrote that he “crossed over to Wood Creek which empties into the Oneida Lake and affords water communications with Ontario. I shall not rest content until I have explored the western country and traversed those lines which have given bounds to a new empire.” The building of the Erie Canal, the development of New York as the “Empire State,” and the opening of the West owes its success almost single-handedly to the hybrid mule and horse as upon any other single contribution.

In 1849 the California Gold Rush saw men racing westward to make their fortunes. Many were not prepared for what they would find. The West was a tough and unforgiving country. Those who had mules and donkeys fared far better than those who did not. One of the most famous donkeys in history was “Brighty” of the Grand Canyon, who befriended a miner and made his way into folklore and modern-day children’s books. As mining was further developed, mini mules bred from small donkeys and pony mares were used in the mines to haul out coal and ore. They worked well under these adverse conditions and were small enough to easily manage the low-ceiling passageways. 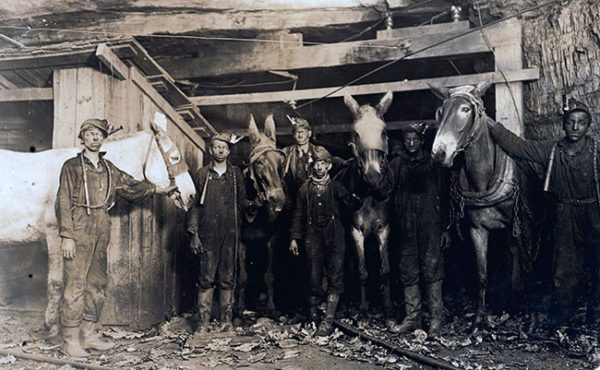 After the Civil War, farmers were again at a loss for man-power and mule-power. Tennessee joined Kentucky as another leader in the breeding of mules and donkeys. During the war, much of the stock had been destroyed or starved to death, so, from 1883 to the end of the 18th century, there was a surge of asses imported from Spain to replenish the stock. This all but depleted the good stock for sale left in Spain.

Missourians, who still love their mules, became the hub of mule power. Mules would eat poor feed, work in blistering sun and live longer than horses. Mules came in a variety of sizes and colors with a multitude of uses. One Missouri Muleskinner from Springfield chuckled and said, “I’d never used more continuous bad mouth words in my life until I started to work with mules.” Muleskinners themselves are allowed by proxy to use some pretty rank terms, yet no outsider would ever be allowed to address their mules the same way.

From 1883 to 1889, the 20-mule teams moved 20 million pounds of borax from the Death Valley floor in California over the mountains to the Mojave Desert, 165 miles away. They traveled roughly 15 to 18 miles in a day, crossing the steep Panamint Mountains to the railroad. During this 20-day round trip, temperatures could be expected to rise as high as 130 degrees. Still, these remarkable animals plodded relentlessly along, doing their jobs with little or no complaint, except when an impatient muleskinner would inadvertently interfere. 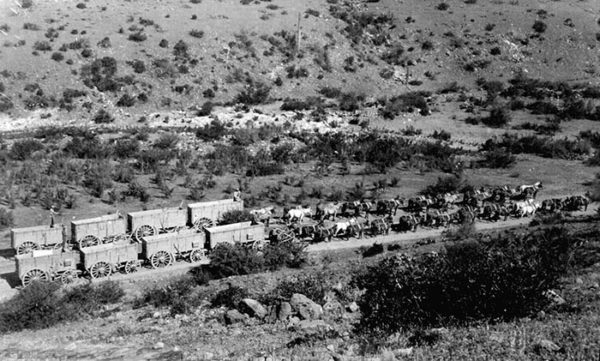 Terrors of Death Valley seemed to arise from only three causes: extreme heat, excessive dryness of the atmosphere, and lack of water. The president of the Eagle Borax Company, Mr. I. Daunet, was forced to kill his animals so he could drink their blood to survive, as blood can replace water. After this devastating near-death experience, and finding the daunting heat unbearable, Mr. Daunet was happy to remain, thereafter, in his office.

Mules and donkeys have been a great friend of man. There is no more useful or willing animal on earth to aid man in his endeavors. “He has had to plod and work through life against the prejudices of the ignorant. Still, he has been a great friend of man, in war and in peace serving him well and faithfully.” Should we not give mules and donkeys the respect, admiration and credit they so richly deserve? In doing so, would we then enrich our own lives as our country has been enriched by them? Think about it.