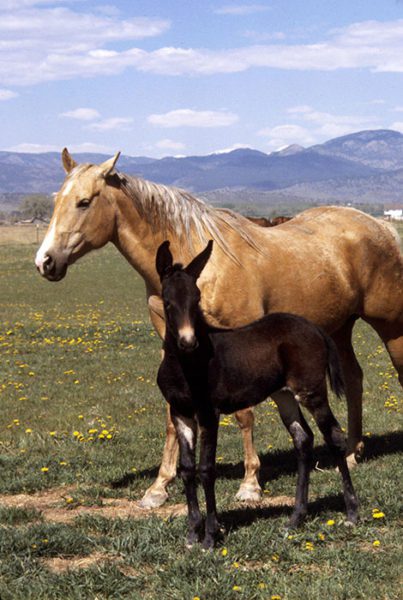 Mules and donkeys have an inborn natural affinity for human beings, so raising your mule or donkey foal to accept humans can be a relatively easy task if you remember a few simple things. First and foremost, you must learn to be a willing role model and, at all times, be polite, considerate and respectful toward your foal in what you ask and how you ask it. Second, you must remember that, from the moment your foal is born, he will learn a great deal from his dam. He will spend the first five to six months with her, so if you want your foal to be friendly and cooperative, then you should first be sure that his dam is friendly and cooperative. A mule or donkey foal from a “sour,” or uncooperative dam will, despite his deeper instinct to be amicable towards humans, eventually learn to mimic her avoidance behaviors. For instance, if your mare or jennet leaves when you approach, the foal at her side eventually learns to leave as well—whether he is truly frightened or not—and this can carry over into his adulthood. That is not to say that you cannot teach the mare and her foal to both be more amicable at the same time, but it is much less time-consuming and frustrating to train your mare to be friendly and cooperative before she gives birth. 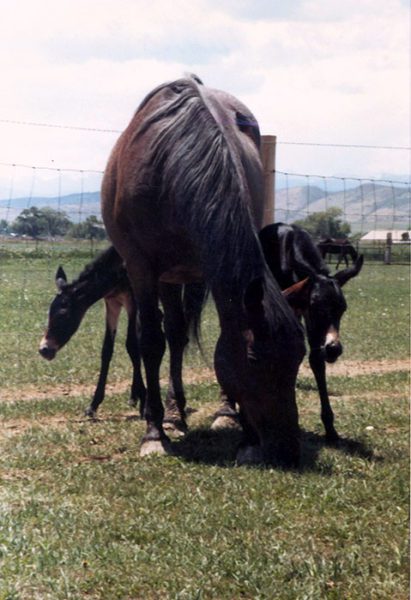 Mule foals are not too much different than human infants in their emotional needs. They require lots of attention, love, guidance and praise if they are to evolve into loving, cooperative and confident adults. In your efforts to get your young foal trained, bear in mind that he is still a child. If he is expected to fulfill too many adult responsibilities too quickly, he can become overwhelmed, frustrated and resistant. This is why it is important to allow your foal to have a childhood. You can turn this time into a learning experience by playing games with your foal that will help him to prepare for adulthood without imposing adult expectations on him when he is too young.

Mule foals love to play games and they have a tremendous sense of humor, so don’t be afraid to use your imagination in thinking up fun and interesting games to play with your foal. Once he figures out that you mean him no harm and you want to have fun, he will probably begin to follow you, even butting his nose against you to get your attention! One of my mules’ favorite games is tag. To teach your mule foal to play tag, just pet him a couple of strokes, then turn and trot away a few steps, then turn and encourage him to follow. It won’t take him long for him to figure out the game. This is especially fun for foals that do not have other foals with which to play. If your foal gets a little carried away and jumps at you, or on you, a firm tap of your palm on his nose, and a loud “No!” will define for him the limitations of the game and bad habits should not result. Directly after he has been disciplined, be sure to let him know his infraction has been corrected and forgotten, and encourage more play. 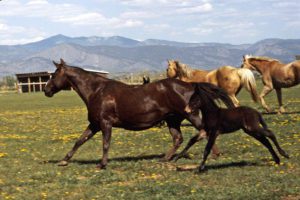 The first component of developing a well-adjusted adult mule is to establish a routine that will give your mule foal a sense of security and trust in you. Having a definite feeding schedule can help a lot. If you take a few minutes each morning and evening to scratch and pet your foal while your foal’s dam is eating and after he has finished nursing, he will associate you with a very pleasurable experience. If his dam is busy eating, she will be less likely to think about running off with him. If your animals are on pasture, a short visit once or twice a day with a ration of oats and plenty of petting while paying special attention to the intensity of your touch on his body will accomplish the same thing.

Once you have developed a routine, always pay close attention to your foal’s likes and dislikes. Each foal is different and has definite ways he likes to be touched and definite places on his body from where he derives pleasure. By touching, stroking and scratching him all over his body, you can easily discover his preferences. If he expresses a dislike for any particular touch, either modify it or discontinue it. Usually, once a foal has experienced the pleasurable sensation of your hands on his upper body, moving down to his legs should pose little or no problem. When he has grown accustomed to your touch on his legs, he will, as a rule, allow you to pick up his feet for short periods of time. All that I have mentioned thus far should be done while your foal is free and unconstrained because it should be his choice to stay with you. If he is tied or constrained in any manner while you touch him, he could become distracted, tense and frightened, and you could be perceived as a threat, which will produce resistant behavior.

Mules are usually about one or more years behind horses in their overall development. For this reason, it is unadvisable to begin formal driving or under-saddle groundwork training in a mule’s second year. During his first year, for good posture and balance, spend plenty of time on leading training, both on the flat ground and over obstacles. Don’t get in too much of a hurry to ride and drive him. At two years of age, your young mule is still a rambunctious child and will not necessarily take too kindly to being restrained or overwhelmed with adult tasks. Mules often seem like they are able and willing at two years old, but, because he is not yet fully physically developed, his resistance could prove to be injurious to him in the long run (not only mentally, but physically as well). It is better to teach only the simplest lessons at this age. Teach lessons that naturally follow the first year’s leading training exercises (lunging and ground-driving first in the round pen, and then in the open arena). 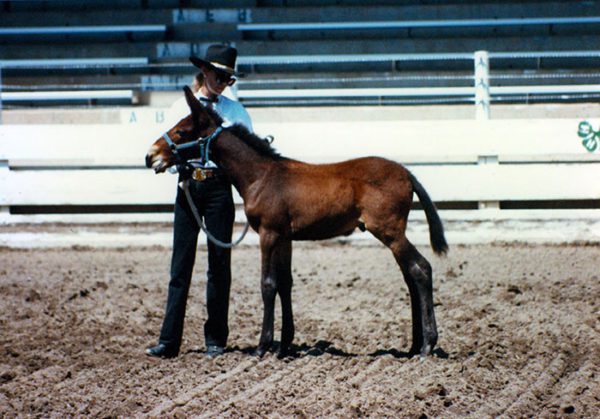 When your mule gets a little older and is ready to be halter broken, you can use your pleasurable status with him to your advantage. First, halter him and tie him to a fence with a safety knot (see DVD #1 n my Training Mules and Donkeys series). Leave him like this each day after breakfast for about half an hour, making sure to return to him every ten minutes. Each time you return, if he doesn’t become tense and struggle, untie him and ask him to follow you. If he refuses, just tie him up again and come back again ten minutes later and try again. If he comes with you, even if it is only one step the first time, take his halter off and play with him for a little while and then end the lesson. This will maintain your pleasurable status with your foal while he learns the things he will need to know as a young adult.  In the next lesson you can ask for more steps before playing and ending the lesson

Once he leads fairly well, you can add the game of obstacles to begin to change his fear to curiosity (you can work on perfecting his technique over obstacles later in the year). Any chance you get, take your foal with you and discover things together while he’s on the lead line. If he becomes frightened, put yourself between him and the obstacle and allow him plenty of time to investigate the situation. When he does show curiosity rather than fear, encourage him to come forward and investigate further, then pet and praise him when he touches the obstacle with his nose. If he has been weaned and is now eating solid food, offer the oats reward. If he learns to stop and investigate potentially scary obstacles in this way as a youngster, he will be more apt to trust your judgment as an adult and will be a curious rather than a frightened animal. Just be sure to always let him know that everything is all right and that you are there to protect him whenever necessary. 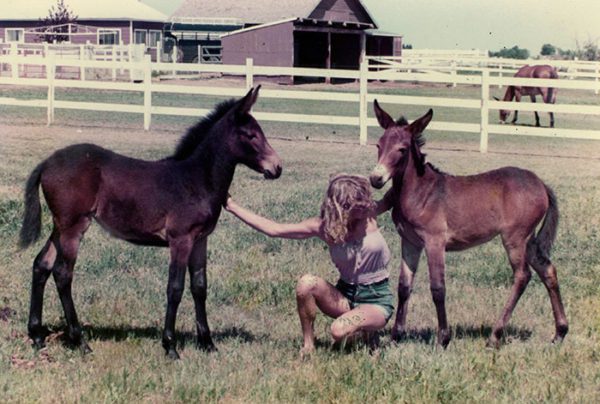 When handling your mule foal, always be sure to give him time to relax and accept a situation…and he probably will. Never get in a hurry and do not try to force anything—or your foal will be happy to oblige you with more resistance than you ever imagined possible! And remember, you can catch more flies with sugar than you can with vinegar, so go out there and have a good time with your little longeared pal. He’ll be glad to be your best friend if you learn how to be his best friend.