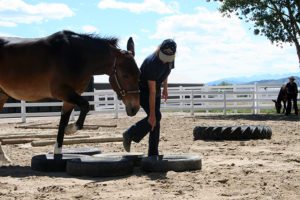 You really don’t want to desensitize your animals to everything. Here is Webster’s Dictionary’s definition of the word “desensitize”:

1) to make (a sensitized or hypersensitive individual) insensitive or non-reactive to a sensitizing agent.

Some people have the misconception that, in order to desensitize an animal, you have to make it numb to its surroundings and any stimulus it encounters. Not true! What you really want to do is sensitize your equine to different body language and cues from you, as the trainer. So “desensitization” does not mean achieving a total lack of sensitivity. Rather, it should be approached as a way of training your equine (in a way that is quiet and calm) to be less sensitive to certain objects or events that may be cause him to be fearful, so he can move forward with confidence and the right sensitivity toward the communication between the two of you. 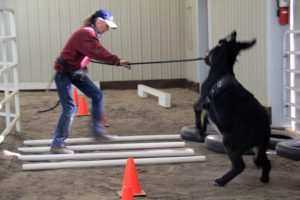 When incorrect, harsh or overly aggressive desensitizing techniques are used on equines, the handler is met with either a very strong flight reflex or a stand and fight reflex.  In either case, an equine will either put up a fight and be deemed a rogue and, therefore, untrainable, or eventually just “give up” and succumb to the trainer’s wishes. This is  a sad situation because the equine is not given the opportunity to make reasonable choices in his relationship with his trainer. The equine’s instinct to warm up to the person training him is hampered by his fear of more desensitization techniques. Thus, he becomes resigned to his work and is not fully engaged in the training process. 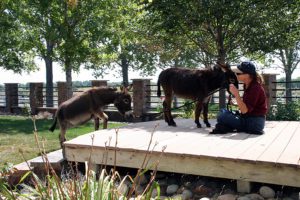 Often, trainers will put obstacles such as a trailer, tire or tarp in an equine’s pen in the hope of getting him used to it by making him live with it. But ask yourself this: How much rest would you get if someone put a blaring radio in your bedroom to desensitize you to noise? Equines have many of the same reactions to their personal space that we do, and they do much better when their place of rest is just that—a place of rest and comfort. And when lessons are approached in a considerate, respectful and rewarding way, an equine is more likely to approach them with an eager and positive attitude that facilitates better learning. It is always better to turn your equine’s fear into curiosity than it is to just assault his senses. 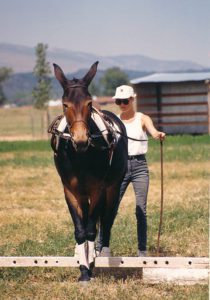 When doing obstacle training, it is better to allow your equine a gradual approach with small steps and great rewards for his honest effort than to whip and spur him through just to get to the other side. When his fear is converted to curiosity, the chance of his refusal to go forward is lessened and his trust in you as the trainer allows you to, eventually, ride through any obstacle at the slightest suggestion. This is because he trusts your judgment and has not been frightened, hurt or made uncomfortable during the training process. This is your equine developing sensitivity to your demands and learning to willingly comply so he can become a participating partner in each activity.

Some trainers believe that breaking down tasks for the equine into tiny steps is a waste of time and that giving a food reward prevents an equine from learning to respect the trainer, but I disagree. When you break tasks down into understandable steps in the beginning stages of training, you will eventually begin to get solid, reliable behavior from your equine. You will have to pay attention to a lot of little details at the beginning stages of training (and that can seem overwhelming at first), but if you take the time to pay attention to these small steps in the beginning stages and through the ground work and round pen work that will follow, when you finally do move on to riding under saddle the lessons will go much more quickly.

Each stage of training should become easier for you and your equine to master. For instance, it actually takes you less time to train in something like a side pass if you have done your groundwork training with the lead line and drive-line lateral training before you even get into the saddle. It also follows that the side pass will come more easily for your equine if he has first learned to move on an angle in the leg yield before having to move straight sideways. This is an example of taking things in small, logical steps, keeping your equine sensitive to his surroundings and tasks without fear. It also greatly lessens the chance for a fear or anxiety-driven blow up from your equine later on.

There is a physical as well as mental aspect to all of this technique. While you are training your equine to perform certain movements and negotiations over obstacles, his muscles, ligaments and tendons are all involved in his actions. When an equine is asked to do a movement for which his muscles have not first been properly conditioned, he will not only execute the motion incorrectly, but his premature attempt will undoubtedly compromise his muscles, ligaments and tendons. Even if he can adequately assimilate a requested movement while he is young, he could easily be creating problems in his body and joints that will cause him escalating problems as he ages. 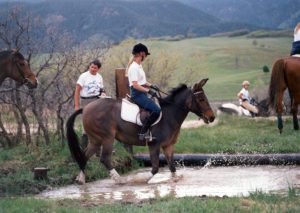 If you were asked to go on a 25-mile hike with a 50-pound pack on your back, how would you prepare in order to safely and successfully perform this task? You would break it down into small steps, working up to it by first running a short distance with a very light weight, and then gradually increasing the distance you run and the weight you carry, which may take as long as a couple of years of careful training and conditioning. But if you tried to prepare for this kind of grueling hike by simply walking around the block a few times for a couple of days, you’d wreck your muscles, compromise your health and probably fail—all because you attempted to do the task when you weren’t physically or mentally ready. And depending on how much you strained your body, you just might discover down the line that the damage is permanent and will worsen over the course of your life. I use this illustration to show that, just as with humans, when it comes to training and conditioning your equine, it’s always better to take it slowly—one step at a time. Your equine will learn to enjoy being a partner in your challenges and goals if you give him the time he needs to be able to do these activities comfortably and with success.

An equine that learns in this sensitized way can also make judgments that might even save your life when you might not be paying attention. This is because when your equine is calm and well rested, he actually seems to be able to anticipate consequences, making him more likely to stop and wait for your cue. The equine that is “forced” during training will most often become anxious about a challenging situation and will seldom stop and calmly alert you to a potential peril—and he most likely will not trust your judgment. 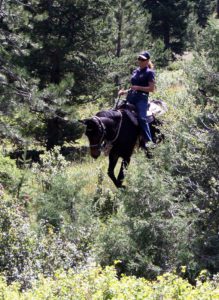 It is because I have trained my mules in this sensitized way that I once avoided going over a 100-foot drop up in the Rocky Mountains while on a trail ride. On that particular day, I was in front, riding my mule, Mae Bea C.T. with four horses behind us. When we came to a giant boulder semi-blocking the trail, I told the people on the horses to wait and rode ahead. I soon found that the trail had narrowed to an impassable two feet wide and a rockslide had wiped out the trail ahead completely! It was straight up 100 feet on one side of the trail and straight down 100 feet on the other side and there was no going forward. The horses behind me were still on the wider part of the trail on the other side of the boulder and were able turn around, so they were safe, but backing my mule around the boulder on that treacherous trail would be very dangerous. I thought we were stuck. At that point, my mule calmly looked back around at me as if to ask, “Well, Mom, what do we do now?” I thought for a minute and then shifted the weight in my seat toward my mule’s hindquarters. This movement from me allowed her to shift her weight to her hindquarters. Then, with pressure from my right leg, she lifted her shoulders, pivoted on her left hind foot and performed a 180-degree turn to the left on her haunches, and with her front feet in the air, she swept them across the open precipice of the cliff and turned us back around to face the wider (and safe) part of the trail. After completing the turn, she stopped again, looked back at me to see if everything was okay and waited for my cue to proceed back down. I believe, without a doubt, that my mule’s incredible and calm response to a life-threatening situation was the direct result of the sensitized training methods I used that created our unbreakable bond of trust.