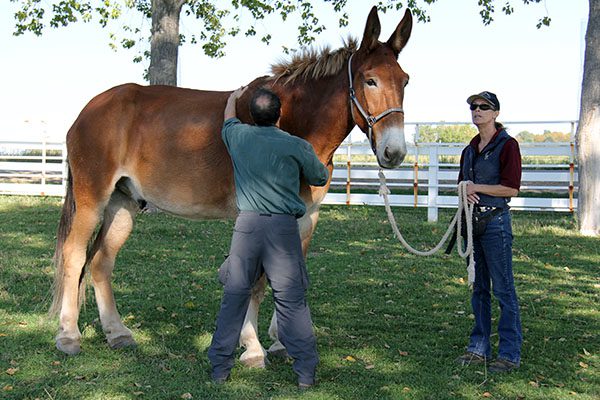 Historically, massage is both ancient and worldwide. Native and folk cultures all over the world use massage for health and healing. There are highly developed forms of massage found in the writings of such primitive civilizations as Sumer, China, India, Greece and Rome. Arabic peoples in Turkey and the near east preserved the classical Greco-Roman culture during the Middle Ages and brought it back to Europe during the Renaissance. Greek gymnasia and Roman baths evolved into the Turkish bath, which includes a form of massage. Health clubs, workout facilities, swimming pools, steam rooms, whirlpools and massage rooms are all part of this legacy. 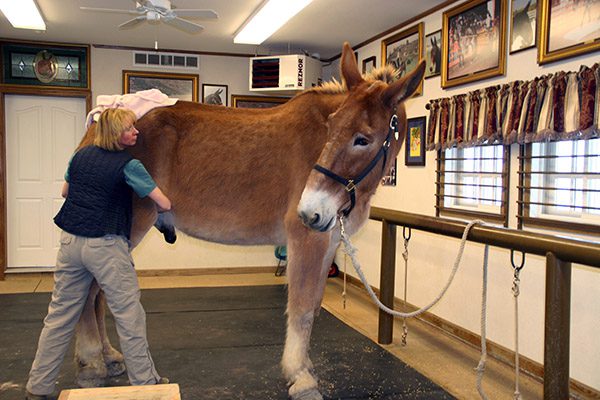 United States. Familiar French terms to describe four broad categories of massage (effleurage, petrissage, tapotement and frictions) were made popular by Johann Mezger. In the 20th century, their work was developed further by their students, and eventually found its way into regular medicine and the alternatives of health and healing. Swedish massage is a popular genre of classic Western massage. It includes Swedish movements, several forms of hydrotherapy, heat lamps, diathermy and colonic irrigation. Swedish massage is still offered at health clubs, some YMCAs, resorts and private clinics, although its heyday was between the 1920s and the 1940s.

Because of its use as a cover for prostitution in the 1950s, massage declined in popularity as a health practice for the more conservative general public. It also lost credibility as a therapeutic source within the medical profession at that time.

The 1960s brought about a revival of massage as a valuable health and healing method. The benefits of massage as a holistic health practice were revitalized by the counterculture and human potential movement. It is now used more often as an alternative or complementary healing process toward health and fitness.

Has your equine ever had any of the following problems? Sensitivity to the girth; restricted movement; continual scuffing of the hind legs; avoidance of leads; problems bending; lameness; inability to lock the knees; recurrent colic; loss of power or coordination; breeding difficulties when mounting or being mounted; constant tail swishing or an uneven top line? Has your equine ever had surgery, direct trauma or

resistance to training? Do you push your equine to the limit? If you answered yes to any of these, your animal will benefit from equine massage, a non-invasive type of therapy that, when administered properly, can address all of these problems and more. 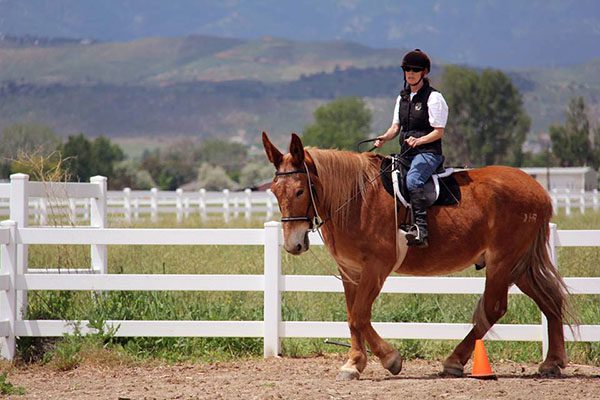 When we ride our animals daily and ask them for repeated movements in Jumping, Reining or Dressage, we demand a lot of their muscular and skeletal systems. This can shorten muscle fibers, restricting range of motion and putting undue stress on muscles and joints. Unforeseen problems can result such as lameness, arthritis, disk degeneration, or worse—a ruptured disk. These crippling dysfunctions do not always wait for the animal to age before they appear. Simple massage can prevent various injuries throughout your animal’s lifetime. Don’t wait for obvious injury to occur—preventive massage increases the length of the muscle fibers, taking pressure off the joints. 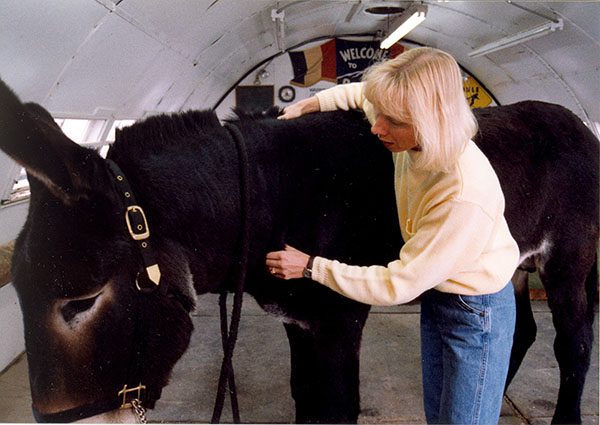 When the muscles are allowed to contract and expand to their full length, they are able to absorb important nutrients that reduce fatigue. Massage also increases blood flow, which helps the body flush harmful toxins, such as lactic acid, that build up from normal use. Massage aids in reprogramming the nervous system to break patterns that can cause atrophy or knotted tissue. The following information is an introduction to some of the basic techniques of massage, which will enable you to identify areas of discomfort in your equine. It is not intended to replace the care of a licensed massage therapist or veterinarian. If you are unsure as to the severity of an injury, consult your vet!

Have you ever had a massage? Remember how good it felt? An increasing number of people in the United States and abroad are recognizing that animals also benefit from massage. At Lucky Three Ranch, I have found that therapeutic equine massage promotes relaxation and reduces stress. It also stimulates healing after an injury and provides significant relief from pain. Your equine may experience soreness when you ask him for some of the advanced moves in his training program. Massage can reduce muscle spasms, and greater joint flexibility and range of motion can be achieved through massage and stretching—resulting in increased ease and efficiency of movement. 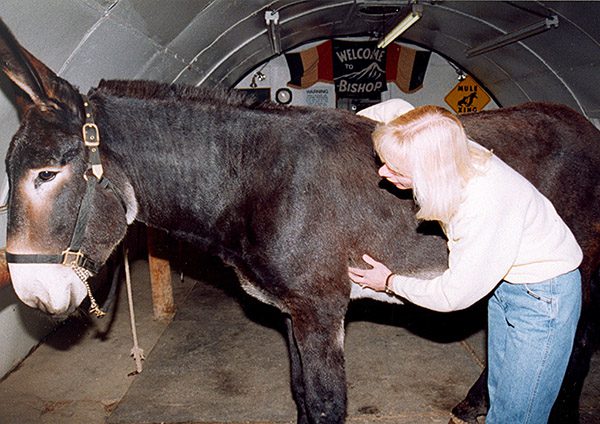 Palpate along the neck, beginning behind the ears and working your way back to the shoulder. Be sure to check the entire neck from poll to shoulder. Is one side more sensitive than the other? Ribs are a very sensitive area. Check each rib and between the ribs. If your donkey is nippy while being cinched or refuses to change leads, it could be from soreness in this area.

As you massage your equine, keep in mind how getting a massage should feel. Keep the pressure light over bony areas like the ribs, back and poll, whereas heavily muscled areas such as the neck and hips can endure more pressure. Always be aware of your animal’s reaction to pressure and respond accordingly. Watch his eyes and ears. As you work look for signs of sensitivity toward the affected area such as biting, raising and lowering the head, moving into or away from pressure, contraction of muscles from your pressure, tossing his head, swishing his tail, picking up his feet, changes in his breathing or wrinkles around his mouth. If there is sensitivity in the neck, the shoulders and upper back may also be involved. If there is soreness in the hips, the ribs and lower back may be involved. 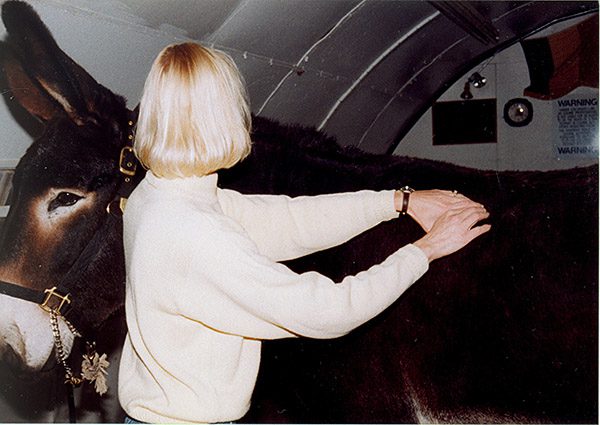 The neck is a good place to begin your massage, making small circles with your fingertips. Imagine your circles as eyes, searching out lumps and bumps under the skin that are knots in the muscle fibers. Start behind the ears and work your way back to the shoulders. If your animal is heavy in the bridle, if he tips his head to one side, or if he has difficulty bending through the neck, he is exhibiting stiffness in this area.

Next, massage the shoulders and between the front legs. Compare the two sides of the chest muscles. Is one side larger than the other? The shoulders work as shock absorbers and need their strength to pick up the front quarters when jumping. If there is soreness in these areas, your animal will have difficulty performing certain athletic movements. 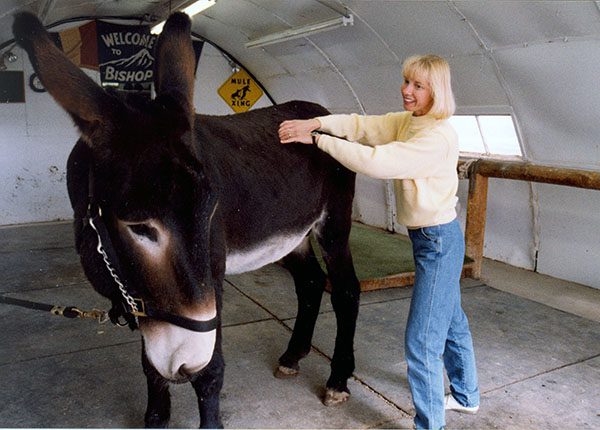 Ribs are a very sensitive area and can refer pain in many directions. Make sure to check each rib and the area in between them. Keep in mind that they span from the back to the belly; this is a large area of sensitivity due to the lack of muscle cover. Include the back when working on the ribs, using your fingertips to feel each vertebra and compare each side for symmetry. If you keep this area relaxed and flexible, your equine will bend more easily throughout his body.

Because muscling is thick in the hip area, you might want to use your fist to exert more pressure there. Using your fist, knead the muscles as if you were kneading dough. The animal will push into 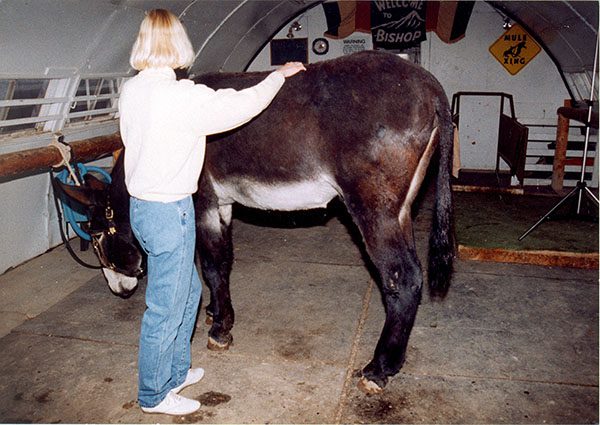 your hand to let you know that it feels good. If he moves away, he is telling you that you are exerting more pressure than he can comfortably endure, and you should go back to using your fingertips. When massaging the hips, the lower back and the last few ribs should be included. Soreness in this area can result from athletic movements like jumping, collection, sliding stops and rollbacks.

Passive range-of-motion exercises involve moving limbs and joints as they were naturally intended to move. Forcing motion can cause tearing of the muscles and a breakdown of the trust you are trying to achieve, so keep your movements gentle and easy. If you encounter resistance, just stop and try again. In order for you to do passive range-of-motion exercises, your animal must be able to trust you and “let go,” allowing you to manipulate his limbs without resistance. If you have an animal that resists, do only as much as he will allow. Over time, he may loosen up and allow you more control. If he doesn’t let go, don’t force the movements—it will foster more harm than good. Some animals are just intolerant.

When moving the limbs and joints, be sure to stay within your animal’s comfort zone. Be aware of the point at which your animal begins to resist and do not reach that point. As your equine begins to trust and understand, and as his muscles and joints loosen, he will afford you a wider range of motion. 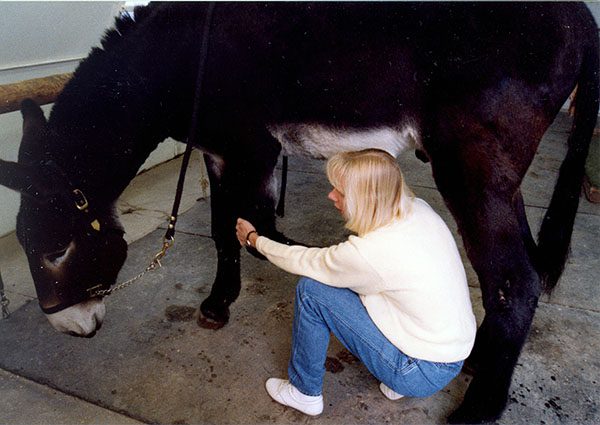 A raised head and perked ears may indicate sensitivity. He is asking for lighter pressure, so learn to pay attention to the things your animal tells you about his body. This animal is still concerned about the pressure. Sometimes you will assume that your pressure is so light it can do nothing, but less is best.

Now he is happy with the pressure. He has dropped his head and has taken a deep breath. This area can be very sensitive if you are doing rollbacks, sliding stops or collection. 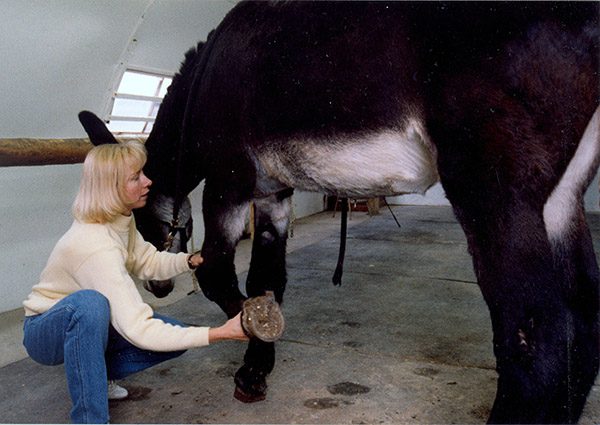 The front legs are a good place to begin your passive range-of-motion exercises. Be prepared to let go and get out of your animal’s way. Shake the limb under the animal and then move the limb forward and back, always being aware of his limitations. Each time you work with your animal, his range will increase.

Small circles are another technique for passive range of motion. The movement re-programs the nervous system, while building trust between you and your animal.

This is an advanced movement, and will take some practice and time to achieve the desired result. Passive range of motion should be done only within the animal’s tolerance, but time will increase his degree of tolerance. 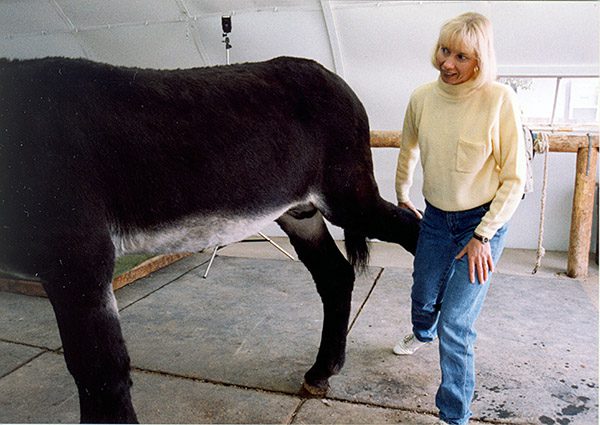 Massage therapy should never be harmful. For the sake of safety and comfort, do not attempt massage therapy for rashes, boils, open wounds, severe pain, high fevers, cancers, blood clots, severe rheumatoid arthritis, swollen glands, broken bones, direct trauma or if there is any chance of spreading a lymph or circulatory disease, such as blood poisoning. Avoid direct pressure on the trachea.

It is easiest to find sore spots and muscles when your animal is warmed up, so after a ride is a good time to do massage therapy and passive range-of-motion exercises. When performing massage therapy and passive range-of-motion exercises, you will also aid your equine in ridding his body of toxins that build up in muscle tissues and eventually cause stiffness, but you do not need to massage your animal’s entire body every time after you work. For example, if he is having difficulty with leads, you may want to massage only the ribs and mid-back. 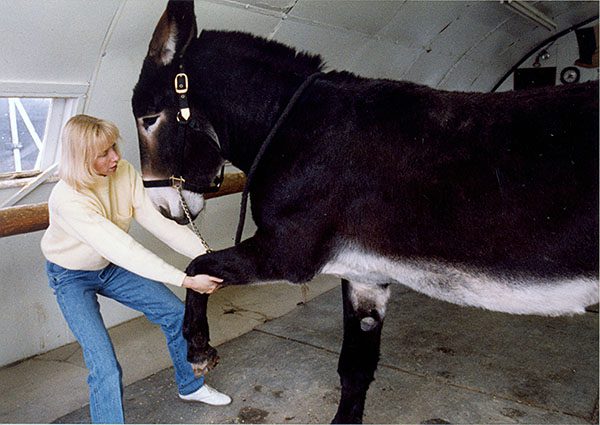 Each time you ride, take the time to quickly go over your animal and assess his sensitive areas: check his range of motion to detect stiffness in the joints. Paying this kind of attention to his body will enhance his athletic performance and provide him with a wonderfully relaxing reward. Stretching the front leg forward is a great movement to make sure that the girth is not pinching your equine after he is saddled. Give your equine the preventive care that he deserves to make your way to a mutually satisfying relationship.