Just how sensitive is a mule about having his ears touched? If a mule is handled often and properly, he should be no more sensitive about his ears than he is about any other part of his body. However, if he is rarely handled, mishandled or handled roughly, he can become quite sensitive about any part of his body and in particular, his ears. Bearing this in mind, take the time to desensitize your mule to touch and handling by paying attention to how he likes to be touched in any given area, and then by being polite about handling those more sensitive areas. This is an important part of any training program, both for general management and for safety purposes. This is the heart of imprinting.

The mule that has an aversion to having his ears handled poses a problem with management convenience, but more than that, he can be a safety hazard in many situations. Here are some examples of lack of desensitization causing inconvenience and possibly, a dangerous situation. Inconvenient: Your mule does not want his ears touched, so you have to disassemble his bridle each time you put it on him. Dangerous: Should you accidentally touch his ears while putting the bridle on him, he could possibly thrash his head around and knock you silly! Inconvenient: If you get into a difficult spot on a trail where you have to dismount and move quickly, you may be unable to take the reins over your mule’s head in order to safely lead him. Dangerous: While you try to get the reins over his head without touching his ears, your mule could inadvertently knock you down or lose his balance and fall down while trying to avoid you. The moral is this: If your mule is to be a completely safe riding animal, he must be appropriately desensitized all over his head and body—including his ears—and trust that you will not harm him. 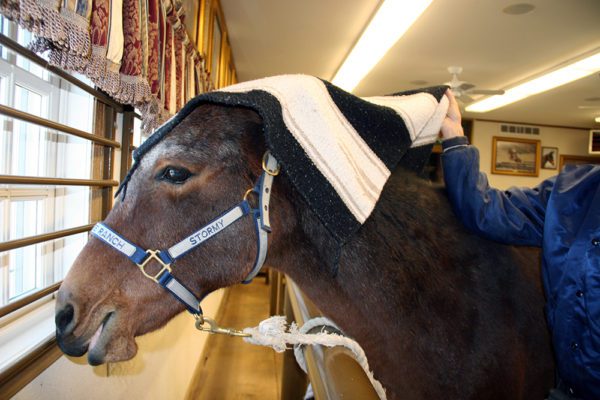 Desensitization should be humane and considerate—never abusive. When we say we want to desensitize an animal, it simply means that we want him to become accustomed to touch and handling all over his body, particularly in areas such as his head, legs and rear quarters, where he is apt to be the most sensitive. An animal that has not been politely desensitized will tend to react more violently to touch. When properly teaching your mule to become desensitized, your touch should be presented in a pleasurable way, so that your mule not only learns to tolerate it, but to actually enjoy it and look forward to it. An old-time method such as “sacking out” is a somewhat crude technique that is used to desensitize an animal by tying the mule in a corner where he cannot flee, and then flinging a tarp or large canvas all over his body, including the head. Often times, it creates more problems than it can solve because it is rarely done politely. A mule that has been “sacked” about the head can actually become more sensitive because this inconsiderate approach teaches him that humans cannot be trusted. He perceives that they will fling things over his head, blinding him and causing him anxiety for no apparent reason. The mule will stand still only because he cannot move, but if he is given the opportunity to flee or fight back, he will more than likely do so. Thus, the old “obstinate mule” myths are actually most often the result of some fault of the trainer, and not the mule. Sacking out more politely will eliminate these kinds of potential bad habits.

Desensitizing a mule that is sensitive about his ears is a long-term process. First, you must maintain a firm, quiet and tolerant attitude. Nothing your mule does should make you angry enough to lose your temper or your patience. Make sure your mule is tacked with a stout, non-breakable halter and rope. While stroking his nose in a polite and soothing manner, ask your mule to come forward, one step at a time, to a stout hitch rail. If he won’t come easily, just snub your lead on the hitch rail so he cannot go backwards, and keep coaxing him forward until he comes. Take up the slack with each step and then hold until he takes another step forward toward the hitch rail. Wait as long as it takes for him to gain confidence enough to come forward. Do not get into a pulling or pushing match with him—you will only create resistance in him and perpetuate avoidance behaviors—and he will win because he is stronger and he weighs more! 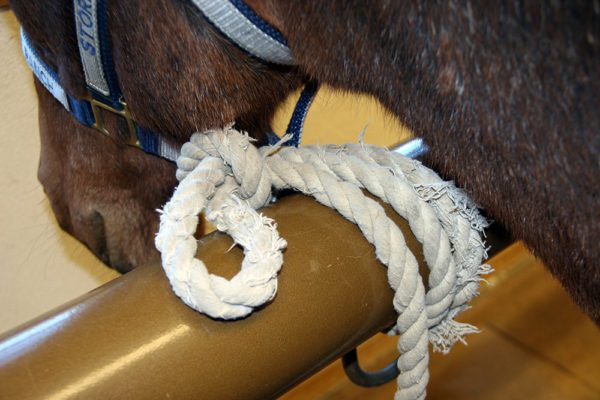 When his nose is finally up to the rail, run your lead around the post and come through the noseband on his halter and around the post again. Then tie him off snugly, so that his nose is tied as closely as possible to the hitch rail, making sure there is no slack. Now begin softly stroking your mule’s nose, using gentle yet firm strokes. Next, work your way up his forehead, and finally toward his ears. NOTE: Remember to use soft, gentle yet firm strokes, going with the grain of the hair and never against it. Do not “pat” your mule—it’s too threatening.

Let the tips of your fingers find the base of your mule’s ear (away from the open side) and stroke upward, toward the tip. At this point, he will probably thrash his head back and forth to avoid your touch—just remain slow, deliberate, reassuring and gentle about your approach. When he has allowed you to stroke the ear, even if for only a couple of seconds, leave your hand resting on the ear and use your free hand to feed him an oats reward. Don’t take your hand away from the ear until he is chewing calmly and no longer worried about your hand on his ear. Do this with each ear no more than one or two times each session and then go to his shoulder and work your hand in a massaging fashion over his neck, toward his ears. While your thumb cradles an ear, let your fingers move over his poll. With your thumb, gently stroke upward on the back of his ear, while leaving the rest of your hand over his poll. If he jerks away, just keep going back to the same position of thumb cradling the ear and fingers moving over the poll. 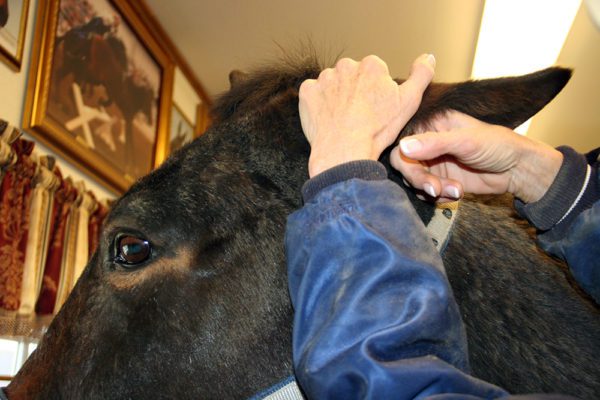 When he will tolerate this, you can then cradle the ear in your fingers and with your thumb, begin to gently rub upward on the inside of the edge of his ear. Do not go too deep into the ear at first. After he is calm with this, you can begin rubbing downward into the ear with your fingers, while cradling the ear in your opposite hand, being very careful not to go too deep. Watch his eyes and allow him to “tell” you how deep to go. If it feels good, his eyebrows will raise and flicker. If he doesn’t like it, he will simply jerk his head away and that is your cue to lighten up. Most mules love to have the insides of their ears rubbed, so find the areas inside your mule’s ear that actually give him pleasure. Each individual mule will be different. 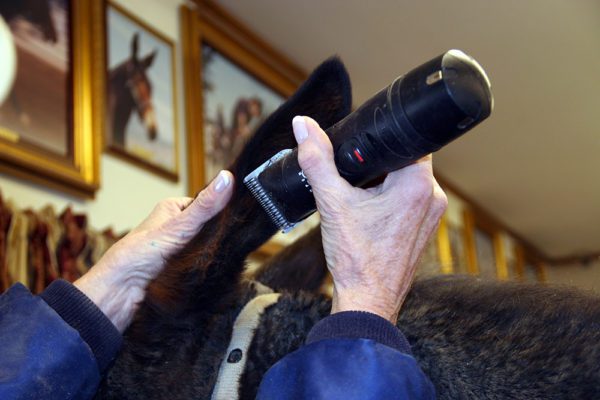 In the next step, you will be in the same position, but you will close your hand around your mule’s ear and hold it with just enough pressure that he cannot jerk your hand loose. Do not hold too tight, grab or pull the ear—just maintain a quiet, gentle hold on the ear and go with his movement. If he pulls away, just slightly tighten your grip on the ear until he stops pulling and then lighten your grip again. Tighten only when he pulls away, and then immediately release when he stops resisting—tighten and loosen your grip as needed, and be sure to follow his movement. He will soon learn that if he doesn’t fight it, there is no discomfort. Never tightly grip his ear and do not tighten your grip any more than you need to in order to hold onto the ear—you never want to induce pain. Once your mule is tolerant of you holding his ear in this fashion, you can introduce the clippers, should you desire, using the same guidelines of tightening gently yet firmly when he pulls and releasing when he submits. However, introduce the clippers only after he has completely accepted you holding his ears. 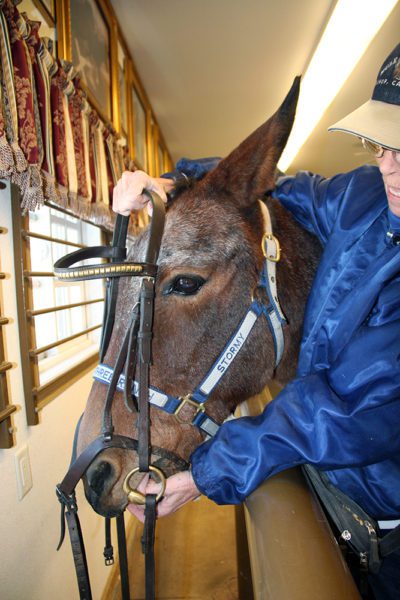 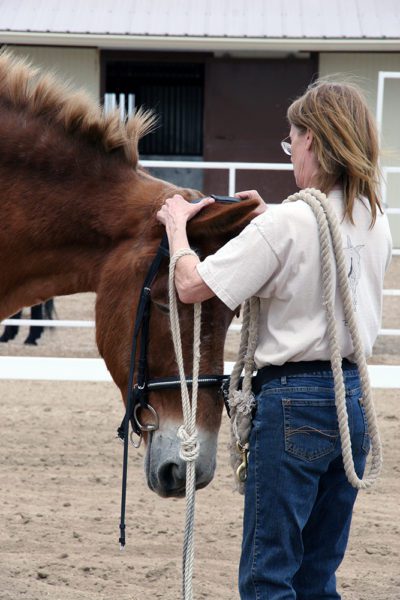 Introduce the bridle by holding your right hand flat on the poll between your mule’s ears, and by using your left hand to raise the crown piece over his nose and up to his forehead. Slide your right hand down his forehead a little to meet your left hand. When your hands meet, transfer the crown piece into your right hand, insert the bit with your left hand, and then raise the crown piece up to the base of his ears. Slowly transfer the crown strap back to your left hand. Gently cup the fingers of your right hand around the base of his right ear. Now bend the ear forward and under the crown piece and slide it over your hand (and the ear) into its position behind the ear. While keeping your palm firmly on your mule’s poll, slowly move to the left ear and repeat the same movements.
The bridle should now be in place and you can reward your mule. Do not put on and remove the bridle any more than once per session. Your mule needs to clearly know that this is not just some annoying past time you have discovered, but an act of necessity. He will soon learn that if he cooperates, it won’t take too long. Once the bridle is on, get right to the business at hand and forget the ears for a while. 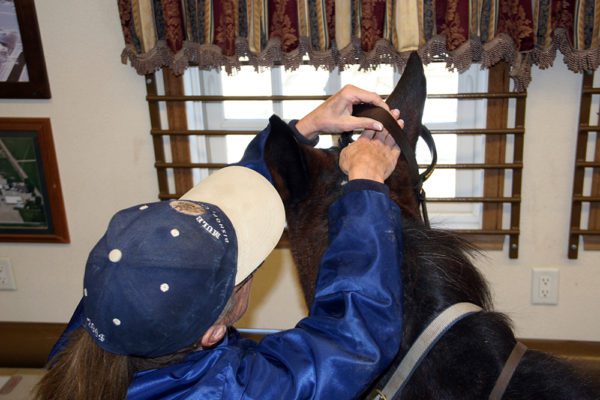 When you return with the difficult mule, tie him as before, stand directly in front of him (with the hitch rail between you) and gently remove the bridle with both hands lifting and sliding the crown piece over both of his ears simultaneously, so there is little pressure on his ears as it slides over them. If he still holds the bit in his mouth, hesitate for a minute when the bridle is off his ears and allow HIM to drop the bit. Removing the bridle this way will help to avoid chafing the ears and will avoid the bit hitting his teeth before you remove the bridle the rest of the way. Always removing the bridle in this fashion will encourage him to drop his head and will prevent bad habits such as pulling away or flinging his head.

When your mule gets used to having his ears handled and being bridled while snubbed and haltered, you can then begin dropping the halter and loosely tying him while he is being bridled. Sometimes it takes a couple of weeks before you can drop the halter—this will vary depending on the individual mule, so just be patient. Your quiet, gentle perseverance will eventually win out and your mule’s ears will be desensitized and quite manageable. After you have mastered his outer ear and inner ear, you may find that your mule actually enjoys having his inner ear stroked or scratched, and bridling becomes easy. Integrating washing his face and cleaning his nostrils and ears during the grooming process should further help him to accept having his ears handled. Handling your mule’s ears can actually become a truly pleasurable experience for your Longears.