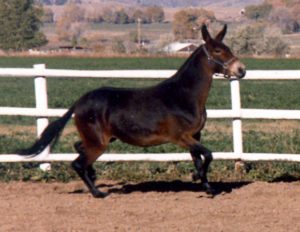 What kind of equine handler are you? When interacting with your Longears or any equine, are you an observer or a participant? Are you fully aware of the reasons for your equine’s behaviors? Behavior in general is most often motivated by a stimulus that elicits a response, yet the early years of physiological development are most dependent on heredity. Heredity includes not only physical characteristics, but mental, emotional and instinctual behaviors as well. We are taught that if an equine’s knees are beginning to fuse, he is ready for training. Is the animal really ready for training just because his knees are beginning to fuse? Physical development is called maturation, and we often determine the equine’s capabilities by maturation alone, with no consideration for the whole animal.

The mule inherits its incredible strength, intelligence and freeze reflex from the jack, and its athletic ability, beauty and the flight reflex from the horse. Some of these characteristics are physical, while others are instinctual, but each contributes to the animal as a whole being. Mental and emotional personality traits are not as easily defined in animals, since they do not speak the same language that humans do. So it makes sense that the equine is often first regarded as a large and potentially dangerous “beast.” In the past, those men who overpowered the “beast” and gained control were revered by others for their ability, no matter how cruel the approach. Because of the vast difference in size, man was viewed as the underdog and his conquests were celebrated.

Characterology, man’s first exercise in psychology, is based solely on casual observations of the personality and individuality of a human being. This is how man initially perceived equines as well as himself in the early days of psychology. The evolution of man’s understanding of himself is not that different from his understanding of equines. It began with casual observations. The equine was first regarded as an animal to be feared because of its potential to do great damage to a person’s physical being. However, no regard was given to the horse’s propensity toward timidity and vulnerability as a prey animal. Man eventually got close enough to the equine to realize there was far more to learn than what he could simply observe. Characterology has been found to be as unsatisfactory when describing the whole human as it has turned out to be with equines.

We’ve learned, through observation, the behaviors the equine will exhibit when left to its own devices in its own environment. In a herd of wild horses, the stallion is king and there is only one mature stallion per herd. He may allow other young stallions to stay to the outside of the herd, provided they show no aggression. But if they do show aggression, the two will battle it out until the weaker one is either run off or killed.

The actual leader of the herd is the most dominant mare in the herd, called the “boss mare.” When the stallion signals danger, it is this mare that will lead the herd, while the stallion generally brings up the rear. During estrus, the mare cycles every 21 days during the warmer months of the year. The mare accepts the stallion for only seven days out of the 21-day cycle. The stallion may cover her several times during that period and will do the same with the other mares in the herd. Not all mares will accept the advances of the stallion at certain times and, because they are as different as people are in their genetic makeup, not all of them will become pregnant every time.

When it is time for the foal to be born, the mare will go off by herself to birth the foal and then return when the foal has gained enough strength to run with the herd. Equines will always show aggressive behaviors in a herd. It is their nature and they learn their place (“pecking order”) within the herd through this process. 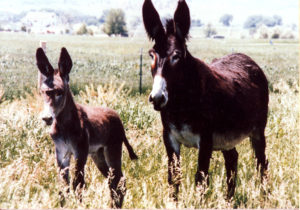 Donkeys are a little different in their herd behaviors and, although they do have a “pecking order,” they operate more like a family and it is not unusual to see multiple males in the family herd. Donkeys have a freeze reflex instead of a flight reflex and will stand their ground before wasting energy in flight. Donkeys seem to be loving and affectionate creatures at first glance, but they can be a formidable rival to most any other animal. In certain situations with a well-planned psychological approach, donkeys can make good guard animals for the very same smaller animals that they might otherwise chase.

Being a hybrid, the mule possesses behaviors from both the horse and donkey. It is in the mule and donkey’s nature to chase smaller animals such as dogs, cats, goats, etc. When supervised, they can be taught not to attack smaller animals, but if left alone, it IS in their nature to run these animals down and they will often kill them for sport. This is not seen as often in the females (it depends on personality as well), but it is still present and should be heeded. 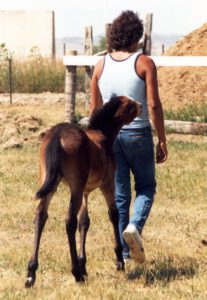 A mule will pin its ears when it is concentrating very hard and when it is following you and wants attention. Mules and donkeys are basically very friendly and rarely lay their ears flat back in pure anger like a horse will. When they are angry, you will know it. Scratching in different areas will produce different results. If you scratch their jowls, for instance, they may perk their ears forward, but when you rub their forehead, they will lay their ears back. If you scratch the insides of the ears, some will like it and tilt the head sideways with quivering eyebrows while others will jerk away at your impolite intrusion.

Donkey jacks really should not be allowed to roam with the jennets and/or mares and pasture breed since they can get angry at the drop of a hat and kill a weaker animal in an instant. It is even more dangerous to leave jacks with foals and horses (they will go after adult horses as well!). Mules, being half horse, will usually only chase other horses if they are smaller or if they are males. Since their dam was a female horse, they will often unintentionally harass female horses, but unless the mares are smaller or weak, the mules will do little damage and are more likely to receive a smart kick to the chest for their insolent behavior. Horses have a flight reflex when they feel threatened…the donkey has a freeze and prepare-to-fight reflex…and mules can go either way depending on the situation.

All of these characteristics are part of the equine whole, but they do not explain who the horse, donkey or mule is as a personality. Most characteristics are a means by which we can judge predictable behaviors that would be considered normal. People possess predictable behaviors that do not change and are valuable in profiling. Profiling enables one to establish a base from which to begin to determine a positive plan of approach that will elicit a positive reaction with any given person. The same is true in the development of the human/equine relationship. But Characterology was not a scientific approach, so man continued to find other ways to investigate and challenge his knowledge of himself and the equine.

Phrenology followed and was regarded as a true science, putting forth the idea that personality was comprised of “faculties” that were housed compartmentally in the brain. Therefore, an individual’s personality could be identified by the shape of his or her head. These same scientific observations were also made in reference to the equine. 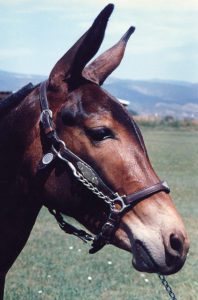 At first, Arabian horses were thought to be silly and difficult—not the ideal mount for the common man. Later, the intelligence of the Arabian was discovered and explained by saying that, because the Arabian’s eyes are set lower in the head and the forehead is broader than most other equines, there is more brain space in the skull. This is also true of most mules and, particularly, Arabian mules. Once man believed in the equine’s intelligence and had a scientific reason for it, training was modified and approached a little differently. Man was then able to learn even more about the horses he was training. It wasn’t long before man discovered that this didn’t always hold true and there had to be more to consider when assessing the whole human being and, consequently, the whole horse.

The idea that body type could reveal personality type evolved from man’s belief that certain personalities were characterized by certain body types. Man applied this knowledge of psychology and behavior to equines, and then made generalizations about certain breeds of equines according to their body type and temperament. For instance, the solid body type and quiet temperament of the Quarter Horse denoted a capable, willing and even-tempered personality, while the more lithe body, tall stature and flightiness of the Thoroughbred yielded a personality that was more suspicious, aloof and, sometimes, difficult to train.

Much time has passed and man has learned that there is a lot to consider if we want to manage our equines in a healthy way and accomplish even the most basic performance with them. In the past, the prevalent belief was that, if you had a reasonably large patch of grass with a fence around it, you could have a horse. We now know it takes a lot more than this! Stay tuned for Part 2 of Look Who’s Talking, when we further explore the equine personality and how to develop the best relationship you can have with them.