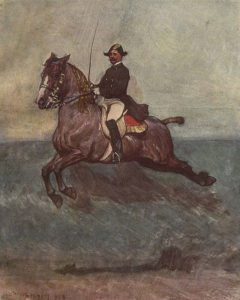 In Part 1 of Equine Behavior: Look Who’s Talking, we discussed the evolution of man’s self-discovery and how he applied this to his approach to equines. If we want to manage our equines in a healthy way and accomplish even the most basic performance with them, there is much to consider during the training process. In the not-so-distant past, the prevalent belief was that, if you had a reasonably large patch of grass with a fence around it, you could have a horse. We now know it takes much more than this!

Following the assessment of Characterology and body-type, Structuralism developed from the concept that man’s attitudes and behaviors were not just a product of the things he experienced, but also the sensations he felt and the images that were produced in his consciousness. This expanded his understanding of ways to explore himself. From his own introspection, man began to perceive the equine in different ways that would be most beneficial to him, but failed to examine what would actually be most beneficial for the equine. 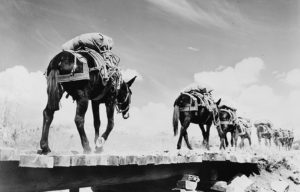 Born in Athens, Greece in 431 BC and referred to today as the original “Horse Whisperer,” Xenophon is considered to be the founder of military Horsemanship. He is credited with the beginning of structured, classical equine training over 1,000 years ago, when equines were trained with military defense in mind.1 The equine’s training was critical to the defense of his rider, and this meant that the animal had to be strong, healthy and obedient. Man discovered that when he paid attention to the mental and physical needs of the equine, he got a more willing and obedient response, and the result was a healthier and more protective companion than one that was forced into submission. Harnessing the defense mechanisms of the horse was not only awe-inspiring but effective.

Mules and donkeys became primarily “beasts of burden,” rather than the mount of choice, as it was more difficult to harness their independent nature without a full understanding of their character and personality. However, their ability to carry heavy loads and maintain footing in precarious places was unparalleled.

As man’s environment changed, he changed with it. However, when dealing with equines, he neglected to realize that he had changed the equine’s natural habitat forever and had begun a compression of space and freedom that would ultimately result in anxious and nervous behaviors in the equine. The equine’s negative response to this environment was most obvious when he was subjugated by man. Man misperceived the equine’s adverse behaviors as deliberate disobedience. 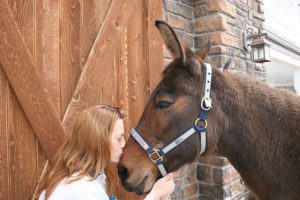 This was still primarily an observational approach. Man did not give enough thought to the equine’s new environment and how it might be perceived by the equine. The equine wasn’t given adequate time to adjust to its new environment or situation, or time to react honestly to it.

Sometimes the response to a stimulus in the environment is predictable and sometimes it is not, so we need to be careful of stereotypical statements like “horses are wild and need to be mastered.” At one time, it was predictable that equines in the wild would take flight from a presumed predator and so would pose difficulty in training. But present-day “horse whisperer,” Monty Roberts, talked to mustangs in the wild and proved that, with patience, and given time, the equine might change this behavior and not run from a perceived human predator—he might actually “join up” with a human being. Equines possess a natural curiosity that can often override instincts when they perceive that they are safe. Thus, we can conclude that, perhaps, the natural instincts of the equine can be significantly changed and his adverse behavior may not be deliberate disobedience. We just need to start looking at the bigger picture—the equine as a whole being.

Behaviorism is a psychology based on stimulus and response. Behavior grows more complex through the process of forming new connections between stimuli and response originally unrelated. Americans were strongly influenced by their association with purely scientific testing with animals. However, man should not neglect the component of equine psychology, no matter how difficult the study. The unconscious of the equine is much like the unconscious of humans in that it is primarily instinctual and hereditary, and will always be present.

The learned behaviors coming from other sources such as environment do not replace but, rather, become yet another integral part of the whole equine. It is easy to believe that if you reward good behavior it will be repeated, but not so easy to identify all good behaviors and reward them promptly. It is even more difficult to learn to identify bad behaviors, punish them accordingly and re-route behavior to the positive again. This requires the handler to move away from an observational post and become involved and engaged with the equine on a whole new level.

As the study of psychology progressed, the Gestalt Theory emerged. It placed more emphasis on the whole of the pattern of behavior or experience, rather than breaking it down into elements. The whole of the experience of behavior is more than the sum of its parts. It has derived many of its principles from the Laws of Physics, especially those involving fields of force, which are believed to be more applicable to psychological events than the concept of connections between independent elements. Even elements take their character from the whole.

We can try to harness the ability of the equine, but, ultimately, the Laws of Physics will apply. If we ask too much from an equine at any given stage of training, we will experience resistance from the physical structure of the equine, resulting in adverse behavior. This is often mistaken for intentional disobedience. When we are in line with the Laws of Physics and in line with the body and mind of the equine, he develops properly through the attitude we have and the activities we ask from him. One then sees an entirely different sort of animal emerge with an entirely different attitude and movement. He begins to “speak to us” and we not only listen, but we actually “hear” what he is saying. We respond with our own voice and our own body language—with attention to his healthy physical development and not with some artificial device. 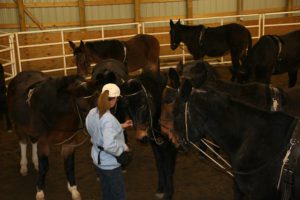 When becoming involved with your own band of equines, you will begin to see these same elements emerge and determine status. I have observed, for instance, that equines do possess the same “racial” and “decisive” biases as we humans do. They form their own “cliques” that are often based on age, status and color. They will even form cliques of “oddballs” in certain situations. When left on their own, my dark mules would hang together, my bay mules would hang together and those who were not born here were ostracized by all the others regardless of age and hung together in their own “oddball herd.” I was eventually able to modify and change these “biases” in my equines during training with an emphasis on patience and good manners. 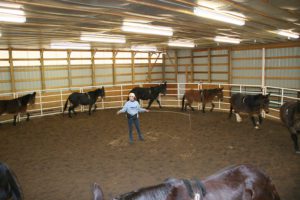 At first, it disturbed me when I could not turn my much older animals out with the adult male mules. I thought they should be able to get along, until I began to think of them in terms of rebellious teenagers who did not appreciate the sage advice of their elders. The “guidance” of the elder equines was not appreciated at all, so I separated the groups during turnout and later integrated them during training, after they had learned to be polite and considerate to the other equines.

Surprisingly, it worked well. They still needed to be grouped accordingly during turnout (their free time) but are now much more manageable and tolerant of each other during their workouts together. The younger ones actually do pay more attention to how the elders perform during the sessions, and even seem to learn from them. 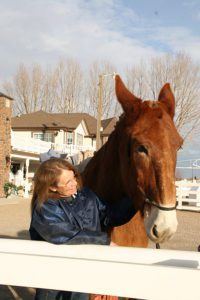 Personality includes not only social stimulus value, but intrapersonal organization as well—how the person views himself from within. Without the evolution of training practices, it would be impossible to get any idea as to whether or not a horse actually possesses any introspection at all. Horses do exhibit timidity, but still provide reciprocal warmth and affection. Mules and donkeys demand a kind response from their human counterparts or they simply disengage. They are openly suspicious and great judges of character regarding their handlers. In my experience, I have noted significant changes in an equine’s facial and body expressions, especially those who have come from abusive situations. They will show either a clear sense of fear or stoic behavior in the beginning.

As they proceed through the training program, their expressions soften with acceptance. They then begin to show interest that ultimately results in an animal that is confident and trusting. You can see the soul emanating from their eyes and watch their overall carriage change to one of confidence and trust. These are simply behavioral manifestations of the equine’s introspection, or the way he perceives himself in his world. Change his world in a kind and understanding way and so will his perceptions change. The equine whose personality develops in a healthy way will exhibit more courage and less fear in the face of stressful situations and extreme weather conditions. The bond and trust in the handler is stronger than his sense of fear and you can see it in his face. 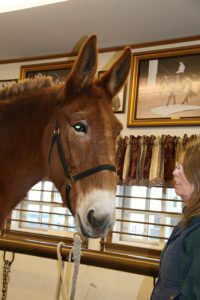 Why are equines so therapeutic? The answer is simple; it’s because they will communicate honestly with us if we open our hearts and minds and truly “hear” them. They will return the same acceptance, warmth and affection we give to them. In addition, we receive a physical benefit of exercise while working with them. Those who learn to interact with their equine during maintenance and grooming will have a better chance of getting to know the whole equine. They will learn how to give pleasure appropriately and elicit an honest response from the equine. The equine will give “hints” of pleasure with behaviors that will reinforce good behavior in the human as well. Those who do not become engaged and intimate with the animal will fall into habitual “use” of animals instead of learning to “care.”

Learning to be polite and considerate and giving pleasure with concrete reasons that are physical, mental and emotional in nature yield true health, and not just a perverse image. Be careful of arrogance. Arrogance stems from a masterful or Godlike approach, devoid of humility, that may elevate one’s ego, but invariably creates a “victim” equine instead of a willing and grateful partner and companion.

The benefits of therapeutic riding programs are more than just physical in nature. They provide a source for at-risk kids to experience warmth and validation of their existence. They get a true and honest response for their efforts and feedback that has been foreign to them. Animals are honest in nature and produce quick and honest reactions to a stimulus. Therapeutic Riding provides an exemplary teaching experience for both human and equine, and those of us with our own equines can derive much more from the relationship than we ever thought possible.

In Equine Behavior: Look Who’s Talking! Part 3, we will explore the ways in which you can enhance the relationship between you and your equine.

1Wikipedia and The Spanish Riding School:,Its Traditions and Development From the Sixteenth Century Until Today by Mathilde Windisch-Graetz, Barnes & Co., Inc., 1956