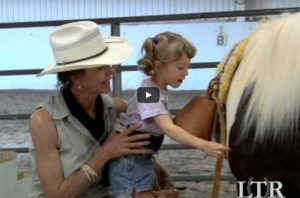 A Sad Goodbye to Our Friend Cliff

With heavy hearts, we at Lucky Three Ranch say goodbye to our good friend, Cliff Uber. Cliff was an inspiration to everyone who knew him. His grace, courage and sense of humor will be missed. A selection of the official statement from Hearts and Horses is below: It is with an incredibly heavy heart that we announce the passing of our rider, volunteer, trainer and dear friend Cliff Uber. For ten years he has graced us all with his beautiful presence, infectious smile, sense of peace and patience and a ...
Read More

Cliff Uber has been recognized as the 2012 PATH Intl. Independent Adult Equestrian award winner!  He will be honored as a special guest at the PATH Intl. Awards Banquet held at the 2012 PATH Intl. Conference & Annual Meeting on November 2, 2012 in Bellevue, WA.  Thanks to Purina Mills for providing travel schloarships for the equestrian award winners.  As the Independent Adult Equestrian National Award Winner he receives scholarship reimbursement funds of up to $1500. You may recognize Cliff from his appearance on the "Walk On, Part 1" episode ...
Read More

As a proud representative of the American Donkey and Mule Society, Lucky Three Ranch is deeply saddened to say goodbye to our close friend, and co-founder of ADMS, Betsy Hutchins. She was one of a kind and shared our love for longears. We will miss her very much. Statement from the ADMS: It is with great sadness that the ADMS announces the loss of one of our co-founders, Elizabeth "Betsy" Hutchins. For over forty years, Betsy devoted her life and her home to the promotion of longears around the world ...
Read More

We are pleased to announce that two episodes from our Jasper series—Jasper: A Precious Valentine and Jasper: A Turkey Tale—have each won a bronze Telly Award this year! The Telly Award statuette is produced by the company that makes the Oscar and Emmy awards. They receive over 13,000 entries annually from some of the finest agencies and corporations in the world, so it is a remarkable achievement to be selected for recognition by their judging committee. The Silver Telly Council is comprised of many top industry professionals, including ...
Read More

Remember Chuchureña, the mule who gave birth to a healthy baby mule last September? Our friend Luzma Osorio sent us this update from Colombia, on the mule mama and her daughter, "La Bien Querida": I took some new pictures of the mule and her offspring last week, the baby is now three months old and she has grown a lot! They are gorgeous!! Photos by Luzma Osorio, Criadero Villa Luz What a beautiful, loving pair! Chuchureña truly proves that mules are good mothers, too! ...
Read More

Mule Are Good Mothers, Too!

An excerpt of an amazing story from a friend of Lucky Three Ranch, Luzma Osorio, on the birth of a new mule in Colombia--and her mule mother! They say mules cannot give birth and are hostile to foals, but the mule Chucurena has proved completely the opposite. On 25 September 2011, she gave birth to a beautiful baby mule in Colombia, South America, and she is proving to be a great mother! Chucurena is a 3 ½ year old black mule from Hacienda El Cerro in Bucaramanga. She is very ...
Read More
© 2022 Lucky Three Ranch