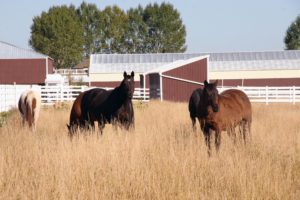 All legitimate mule breeders should be aware of this condition, especially because it can occur more often when breeding donkey jacks to mares than it does when breeding stallions to mares within the same species. If the hybrid foal’s blood type is the same as its mother’s, then there is no problem. However, when the jack and the mare have different blood types, and the foal possesses the jack’s blood type, there is potential for NI to occur.

On the surface of the mare’s red cells are antigens that will stimulate the production of antibodies against incompatible red blood cells (RBCs). There are basically two ways that these RBCs can get into her system: 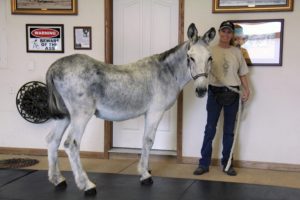 1) If the foal’s RBCs enter the mare’s circulation via the placenta during pregnancy or during delivery.

2) If the mare obtains these incompatible cells during a blood transfusion.

If neither of these conditions occurs, the mare can carry, birth and nurse her foal with no problem. However, if the incompatible red cells do somehow get into her system, she will begin making antibodies against those cells that, in turn, will be passed into the foal’s system via the mare’s first milk, or colostrum.

“Signs of neonatal isoerythrolysis depend upon the rate and severity of red blood cell destruction. Affected foals are born healthy, and then typically develop signs within 24 to 36 hours. In severe cases, the signs of NI may be evident within 12 to 14 hours, whereas in mild cases, signs may not be present until three or four days of age. NI foals will develop progressive anemia, thus leading to depression, anorexia, collapse and death. These foals may also develop pale mucous membranes that later become yellow or jaundiced.”2 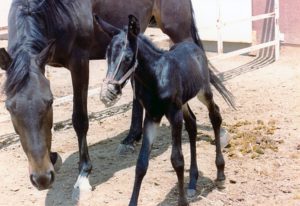 The mare’s blood can be tested ahead of time to determine if she has a different blood type than the jack (or stallion), but a positive test result does not necessarily mean that NI will automatically occur, only that there is the possibility for occurrence. Blood samples from the mare and jack should be taken two to four weeks before the mare is due to foal to determine if she is producing antibodies against the foal’s red blood cells. If the blood test is positive, then precautions must be taken to save the foal at birth by making sure it is prevented from nursing its dam for the first 24 to 36 hours. The foal should be muzzled and bottle-fed colostrum from a mare that has not produced these same antibodies, and therefore is compatible with the foal. To be absolutely safe, the colostrum should be obtained and tested from a mare that has never had a mule foal. 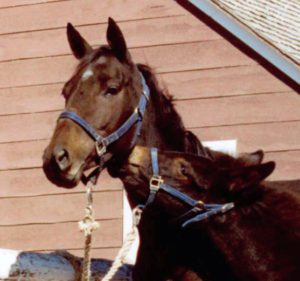 For the best results in building the foal’s immune system, this “replacement” colostrum should be collected within the first six hours after birth. The mare being used does not need to be the same blood type as the foal, but her blood must not contain antibodies to the foal’s RBCs. The quality of the colostrum will determine the amount fed to the foal. Immediately after birth, the foal should be given two to three feedings of colostrum within the first two hours, and then be given milk (for energy) for the first 24 to 36 hours after that. Goat’s milk is best for this purpose. After 24 to 36 hours, the foal should be able to be safely returned to its dam’s milk. If NI is present but is caught early enough, the foal can be transfused with blood and there is a chance that it may live, but this transfusion procedure has inherent risks and there are no guarantees of success.

Research on NI has been done over the years on Thoroughbred horses, and statistics indicate that 20 percent have incompatibilities between dam and sire, yet only one percent of foals develop NI. The incidence in mule breeding suggests that the rate is higher. The Colorado State University Veterinary Teaching Hospital in Fort Collins, the University of California at Davis and the Louisiana State University all have laboratories set up to do this initial NI testing on mares. Consult with your veterinarian about contacting any of these facilities for information on how to collect and ship samples for NI testing.

Out of concern for future mule offspring, the Lucky Three Ranch—with the assistance of our veterinarian, Kent M. Knebel, D.V.M.; Colorado State University researcher, Josie Traub-Dargatz, D.V.M., M.S.; and Louisiana State University researcher, Jill McClure, D.V.M., M.S.—began thorough testing of Lucky Three Ranch stock in the early nineties, with particular attention paid to our breeding jack, Little Jack Horner. It was discovered by Dr. McClure that Little Jack Horner’s RBCs were resulting in unidentifiable antibodies in many of the horse mares that carried his foals. The mares that were sampled had antibodies present, but Dr. McClure was unable to “type” the antibodies found in the mares.

The next step was to immunize some research horses at L.S.U. using Little Jack Horner’s RBCs. If they made antibodies, Dr. McClure would have a more readily available source of antibodies for further research. She also took samples from some burros from another L.S.U. project and discovered that they, too, had the same RBC factor that occurred in Little Jack Horner, but the antibodies produced in the mares were still unidentified. There was already quite a bit of medical and scientific data on N.I. that could help in the prevention of this potentially fatal condition. However, this discovery of new antibodies stimulated by the jack and produced by the mare proved that there was still a lot more that needed to be learned. All of Little Jack Horner’s tests showed him to be of a compatible blood type to the mares if he was a stallion of the same species, and yet these unknown antibodies were being produced. Perhaps future research will hold the answer to this puzzle.

A debt of gratitude is owed to veterinarians like Dr. Kent Knebel, who take time out of their busy schedules to collect samples for this research, and to dedicated researchers like Dr. Josie Traub-Dargatz and Dr. Jill McClure, who continue with this important research that benefits our mule industry and its future generations. Their ongoing research will continue to have a significant impact on mule breeding programs, not just here in the United States, but all over the world.