We hope you enjoy this intriguing and inspiring article that was submitted by one of our contributing writers, Tara Edwards, Trimepil: 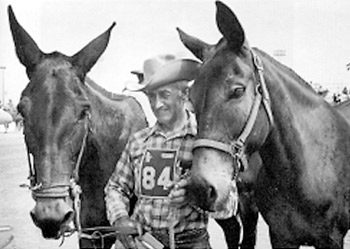 Sometimes, miracles do happen. Such was the case in the not so distant 1976, when a proper underdog proved to be better than the competition. The competition being over 198 champion horses who were gunning for the title. A simple mule came out on top when put against some of the most treasured horses from all over the world.

But was this outcome truly miraculous, or was it a result of something else? Could this result be predicted? Let’s find out.

In the days when America enjoyed their two hundred years of independence, the beauties of the country were put on display. Simple celebration of the country and its treasures wasn’t quite enough though, because patriotism reached its peak and had to be expressed properly. This lead to the organization of a few very interesting and unique events. One of these events, or setups was the Freedom Train. This train was practically a museum which moved along on the railways. It went through 48 states on its journey across the state, allowing millions of people to see it and enjoy its presentation. Another kind of event that took place often in these times were nautical parades. Some of the most fascinating and biggest ships, along with their smaller partners set out and traveled along the coastline, all the while carrying large patriotic flags. Love for the country and its freedom didn’t end there, every company that could, tried their best to express their unwavering loyalty to the flag. Railroad companies decided to paint their entire trains into red, white and blue so that state flags could go all around the railroads, bringing joy to any who see them.

Amidst all this commotion, a competitive event took place. One which allowed anyone with a couple of horses, $500, and a resolute adventurous spirit to try their luck. The Great American Horse Race, as it was called, was brought to life by a pair of horse loving salesmen, Chuck Waggoner and Randy Scheiding. The prize was pretty generous, reaching $25,000, but that wasn’t the greatest motivation for most competitors. This was a chance to prove the worth of a horse, and to gain fame and reputation. But to achieve that, one would have to travel 3,500 miles over fourteen weeks across America on the back of their trustworthy steed. Some of the trails the contestants would experience were the Oregon Trail, the Pony Express Trail, and the Donner Party’s doomed journey. This journey presented a unique possibility to get familiar with the wild beauty of 13 states up close while enjoying a bit of healthy rivalry against the opponents.

This race turned out to be very appealing and fascinating, attracting people from all over the world, not just America. Such a result wasn’t surprising though, because this competition was in fact a chance for horse breeders of all sorts to demonstrate their horse’s worth, beauty and uniqueness. Over 90 teams applied (each allowed two horses), most of them hoping and believing they will prove that their horse was indeed, the best of the best.

Of course, some were in it just for fun, having entered without much hope of winning. Others were really serious about the race, bringing treasured horses with great heritage behind them. From 18 year old singer, to 69 year old horse trader, with pediatricians, students, cowboys, nurses, and at least one university president, they all tried their luck on this race.

The only Russian Orlov stallion in America, called Nature’s Ballet, descendant from a horse that belonged to Nikita Kruschev entered the race, being ridden by one Californian. Iceland  sent over ten Viking high born horses to compete, but only after they had altitude training in San Francisco. France sent over a dozen horsemen dressed like Marquis Lafayette’s soldiers. Competition came from Australia, Denmark and even Japan, all believing that their horses would came out on top.

One contestant was a bit different than the rest because he did not come with horses that were high born or had great descendants. All rides were allowed to enter the race with two horses, one being a backup horse in case the main steed couldn’t ride anymore. Virl Norton, a 54 year old steeplejack from San Jose, California, decided that both of his horses would be his loyal mules. He considered them precious just as much as any other contestant considered their horse to be special. With great confidence, he entered the race strongly believing that his mules were the most adequate choice for this exhausting long race. Norton was a kind hearted man, with no grudges with the other competitors. A few days before the race, he gave his second mount, Deacon, to a contestant whose horse got injured.

The race was unbelievably demanding, burning through 18,000 horseshoes in total. Despite the slow pace and the obligatory vet checks every 10 miles, some of the main mounts went lame and were swapped for the backups. Some of the backups also went lame.

Most riders considered Norton an honorable man because he wouldn’t think twice about helping other contestants when they had troubles. He let people take photos with his mule Leeroy and he’d make up the time lost by skipping water stops. Leeroy was considered a puppy dog mule due to his calm temper and composure. After some time, Norton’s backup mule Lady Eloise suffered an injury and had to withdraw from race, but Leeroy and Norton kept riding, taking it slow and easy during their journey.

Norton was the 31st rider to pass the finish line, but that didn’t mean he was far from victory. In fact, Leeroy even flapped his ears as they reached the goal, celebrating their success long before the results came out. After the judges calculated the total score of all contestants by measuring their riding time and applying the penalties, the winner was declared. Norton and Leeroy came out on top with 315.47 hours in the saddle, ahead of an Arabian in second place with 324.6 hours riding time. Top ten horses were basically show steeds, with two exceptions, Leeroy and Deacon, who were mules.

Sometimes the underdog is in fact the favorite, but only they know that. Norton and Leeroy proved that.