From the SWISS BULLETIN: Evidence of mules in ancient times, Part 2

We hope you enjoy Part 2 of the translated historical Longears article written by Elke Stadler,  originally printed in German in the SWISS BULLETIN that comes to us from Switzerland. More articles to follow!

Further evidence of mules in ancient times is shown by finds from various archaeological excavations. The identification of hybrids is more and more illuminated by archaeological research. The finds of mule bones on civil and military sites are scattered throughout Europe.

Pompeii was an ancient city located in the modern commune of Pompei near Naples in the Campania region of Italy. https://en.wikipedia.org/wiki/Pompeii

In the stable of the house of “Casa Amanti” the remains of equine skeletons were found, five in total, including four donkeys between 4 and 9 years old and one male mule between 8 and 9 years old. The equines were probably used as pack animals for the transport of pastries. An analysis of the food remains in the stable was also taken. 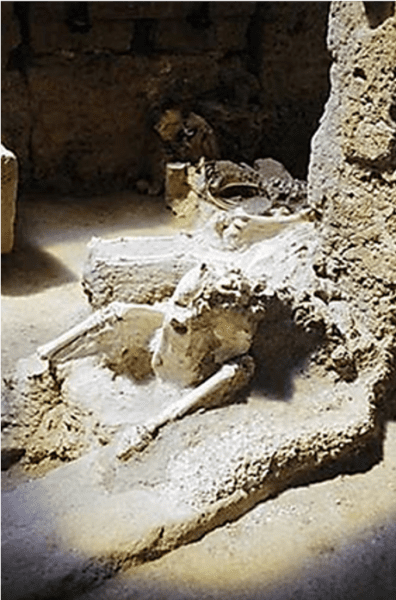 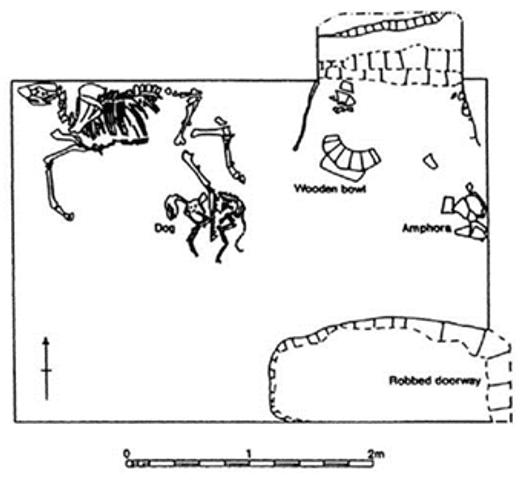 (Berry J., The conditions of domestic life in pompii in AD 79: A case study of houses 11 and 12, insula 9, region I, Papers of the British School at Rome)

In the stable on this area, probably originally a “Kubikulum” (side room), the skeletons of a mule and a dog were found. On the northern wall, remains of wood can be seen, which indicate a feeding rack. The palynological examination of the plant remains showed a variety of grasses and weeds as well as cereals, olives and nuts, indicating forage, litter and dung. Two fortified iron rings near the mule’s head suggest that it was tied up at the time of death.

The large number of amphorae in the “Impluvium” (water collection basin) of the nearby atrium (Roman dwelling house), as well as the remains of a broken amphora in the stable, indicate that the mule was intended to transport amphorae to the city. The remains of a dilapidated “Caupona” (bar, sales room) in the adjacent Insula 11 indicate commercial activity. An inscription on the western front (AMARANTUS POMPEIANUS ROG (AT) and three painted inscriptions, one on the neck (EX POMPEI AMARANTI) and two on the belly of several amphorae found in the building, indicate that Amarantus was a wine merchant, which required the keeping of a mule to transport the amphorae. 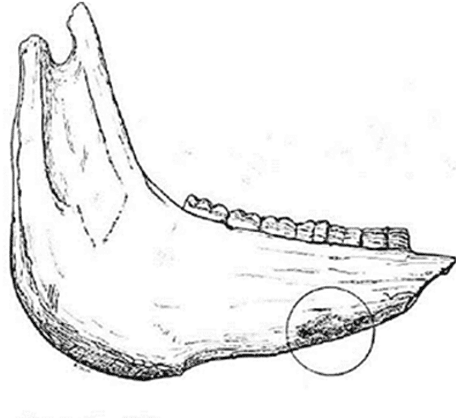 The age determination is inaccurate, as the jaw is broken at the level of the incisors. The age can only be determined more accurately on the basis of the wear and tear of the incisors. It was also not possible to determine the sex because of the missing canines, the sex index. They are more developed in males than in females. The pronounced wear in an area of the jawbone (circle) is probably the result of the damaging     pressure from a halter or muzzle.

Examination of the molar profile of the jaw made it possible to determine the London jaw more reliably than mule jaws. It has a very accentuated “V” shape of the lateral cavities of the first molars (cheek teeth). The comparison with the lower jaw of another mule (Dangstetten) shows a strong similarity.

The finding region Kalkriese is an area in northwest of Germany, where large quantities of Roman archaeological finds were made. https://en.wikipedia.org/wiki/Kalkriese

Archaeologists have identified the bones of eight horses and about thirty mules on the site of the Battle of Kalkriese, which took place in 9 A.D., including two skeletons in good condition at the trenches dug by the Germans to capture the Roman vanguard. The first mule was found in the trench, its bones (head, neck and shoulders) and its harnesses are in adequate position. The animal was therefore not completely exposed to natural decay (which explains the good osteological and anatomical preservation conditions).

The mule had an iron bridle and harness with metal elements and stones, and a bronze bell with iron clapper. The inside of the bell was stuffed with oat straw wrapped around the clapper so that the bells were not heard in enemy territory. The growth of the roots on the stems indicated late summer – early autumn, which made it possible to determine the date of the ambush around September. 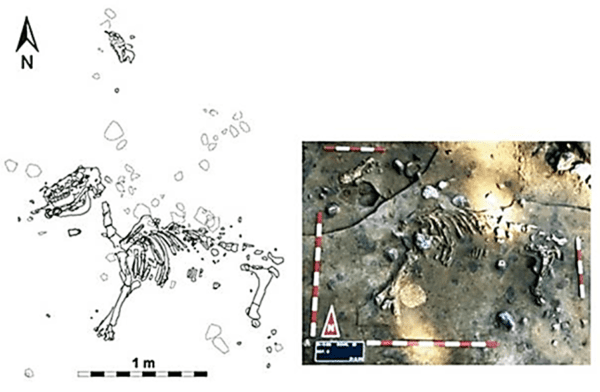 In 1999 the fragmentary remains of a second 4-year-old mule were found. It carried a smaller bronze bell and an iron bridle. The animal died of a broken neck, probably while trying to climb the German wall in the general panic of the fight.

It is the most important and most extensively researched ancient excavation site in Austria 28 mi east of Vienna. https://en.wikipedia.org/wiki/Carnuntum

Horses and mule bones were discovered in the outer ditch and in pits on the edge of the first ditch of this Roman legionary camp. Four mules could be identified from the remains. The sex could be determined based on the development of the canines on the lower jaws. They were only male animals. Two of them died at the age of 6-7 years, the other two at about 15-17 years. The age is estimated on the basis of the abrasion of the teeth. Since mule teeth are harder than those of horses, the age had been underestimated and had to be reassessed.

The height at the withers was determined in relation to the length of the bones found. It was approximately between not less than 140 cm and maximum 155 cm. Apart from one mule, the other three suffered from diseases of the limbs and/or the spine caused by frequent heavy loading. A pathological change in the spinal column of a mule also indicates this. One shows a pathology (exostosis) on the jaw, which is caused by repeated rubbing of a bit or harness. 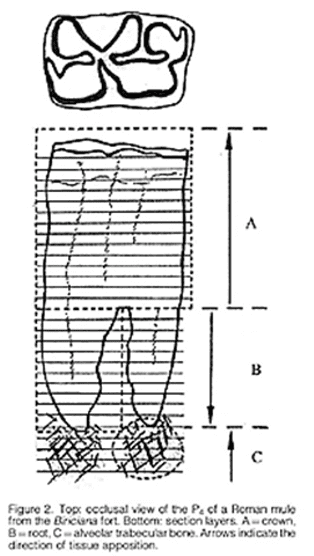 The Roman fort at Weissenburg, called Biriciana in ancient times, is a former Roman Ala castellum, which is a UNESCO World Heritage Site located near the Upper Germanic-Rhaetian Limes. https://en.wikipedia.org/wiki/Biriciana

Four skeletal remains of mules were found during an excavation in this Roman camp. The age was determined to be 160 AD after the discovery of eleven coins. They were found in a bag that was left with the mules. The authors raise the question of a possible local breeding or traditional import of mules from Mediterranean countries. When examining the teeth of an 8-year-old mule, it was found that the food in the mule’s environment must have changed until the time of its death. The animal spent part of its life at high altitude, according to the proximity of the camp, probably in the Alps. The investigations show that the animal must have been born and bred in northern Italy. It must have been used for work in the Alps for a while and later on until the end of its life near Fort Weissenburg.