It was a rainy day, so I decided to have Chasity and Wrangler’s workout take place in the indoor arena Round Pen. I had not planned to film this workout, but since the Round Pen was a lot further from the Tack Barn than my outdoor Round Pen, I decided to take my chances and try to lead Chasity and Wrangler together! I thought that would be film-worthy for sure. Those of you that have tried to lead ONE donkey around puddles in the road and other such “scary things” know that you cannot count on their compliance. All you can do is HOPE for it! As it turned out, Chasity and Wrangler were very good all the way to the Round Pen, but there were still surprises to come! 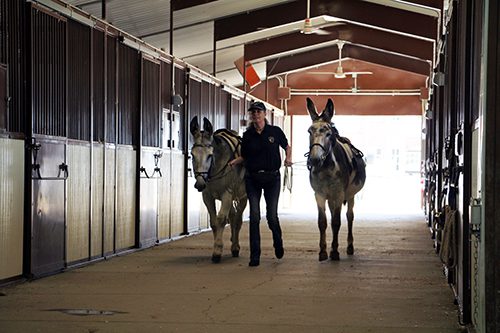 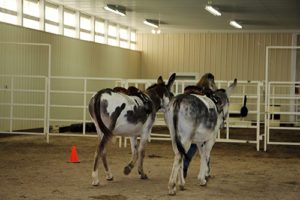 They both stood quietly while I unlatched the gate as they had done dozens of times before, then waited patiently as I opened it. 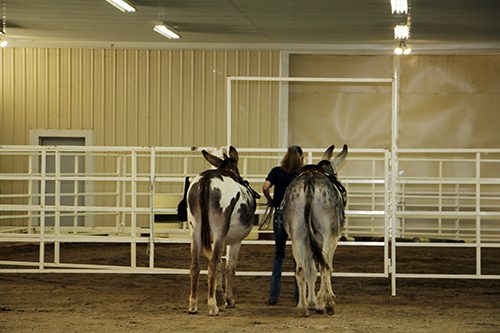 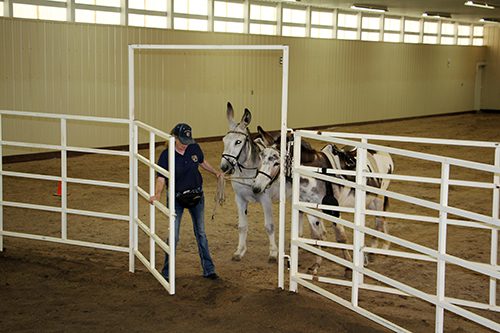 They executed the gate perfectly together. This is a testament to my belief that when these kinds of movements are consistently done exactly the same way, it eliminates confusion and promotes compliance. They happily received their rewards of crimped oats from my fanny pack. 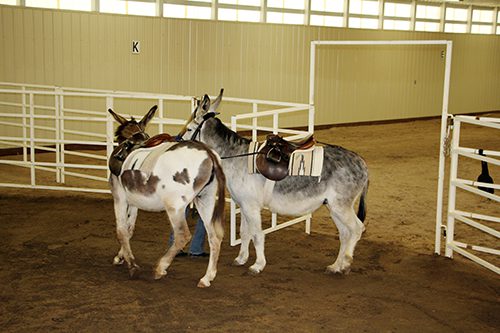 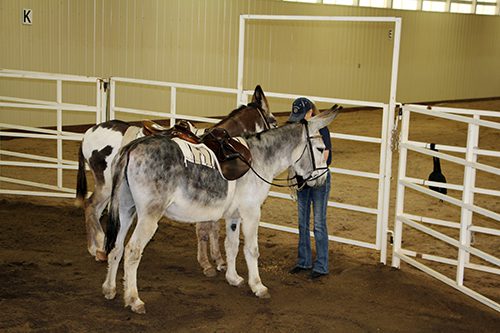 I then tied Wrangler to the fence with the “Elbow Pull” where he would wait while I adjusted Chasity’s “Elbow Pull.” Chasity checked out the new work space. 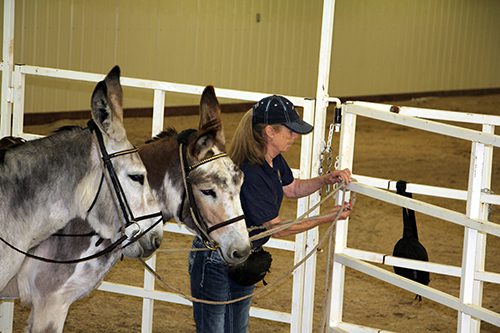 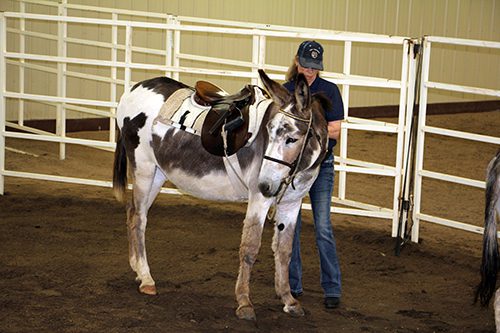 First I adjusted Chasity’s “Elbow Pull” and then I adjusted Wrangler’s to keep them from raising their heads too high and inverting their neck and back. 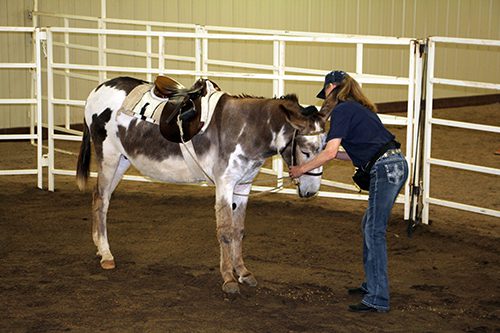 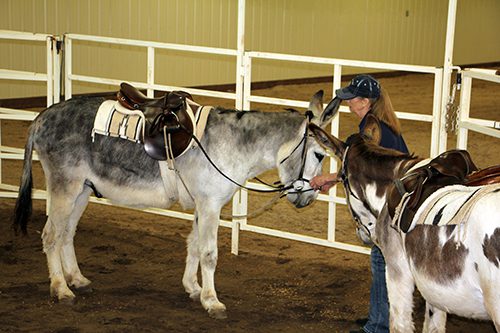 They both walked casually with no pressure from the “Elbow Pull” at all. When asked to trot, Chasity was “up against” the “Elbow Pull” at first, but was still stepping well underneath her body and striking her hind feet directly under the center of balance. 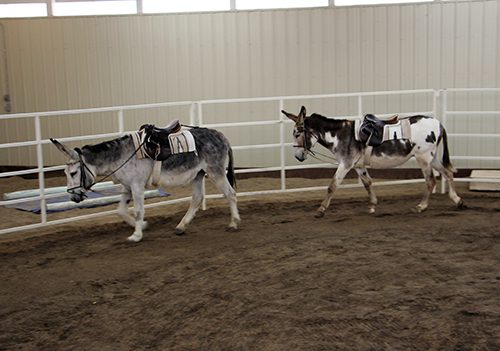 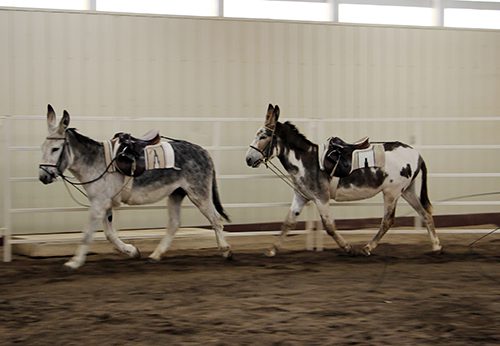 It was after the reverse that I discovered that Chasity was in heat and Wrangler decided he would like to mount her! So, I deliberately and quietly took him from the Round Pen and tied him up outside the fence. Chasity resumed her workout alone. She did lovely at the walk and kept the “Elbow Pull” loose, even throughout the reverse! 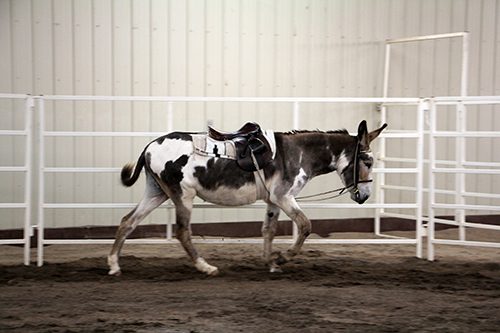 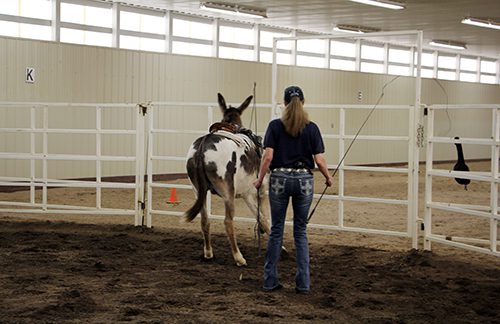 When I finally asked for trot, she was hot to trot! Chasity was definitely improving her ability to maintain her self-carriage and good posture. When the “Elbow Pull” is properly adjusted, it will encourage each individual equine’s BEST posture. It should NOT force their head down. 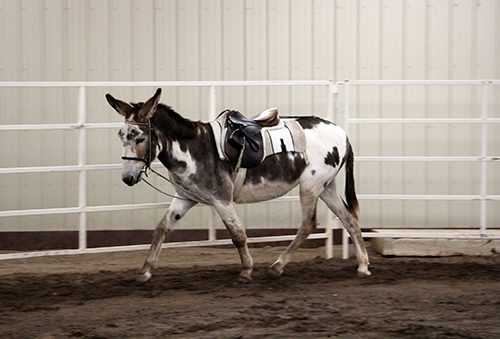 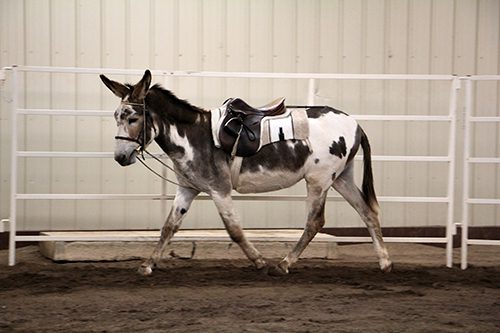 When asked to “Whoa,” Chasity happily complied and then turned to me for her next command. I asked for the “Reverse” and she was prompt in her response. 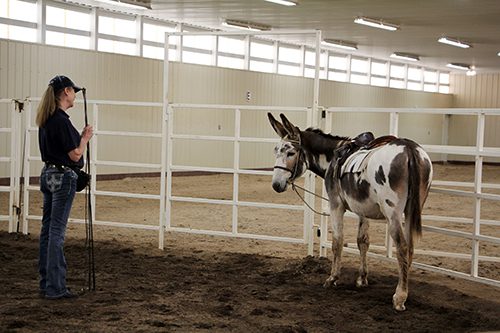 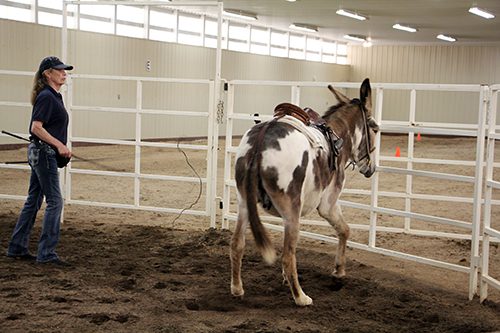 Then Chasity resumed her calm forward motion at the working walk, maintaining a loose “Elbow Pull.”She has made marked improvement in just 4 short weeks of Round Pen work after 3 months of leading for core strength and balance in the “Hourglass Pattern.” 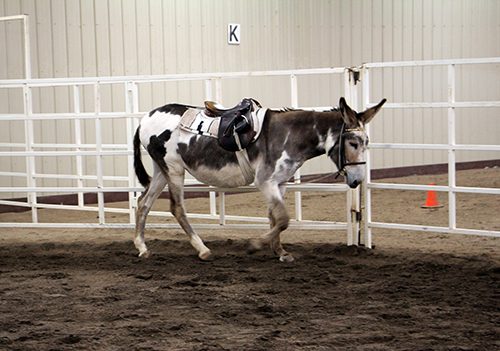 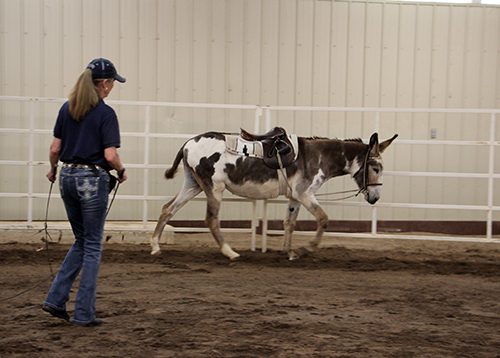 When I asked for trot, she showed me she was a bit tired and was back up against the “Elbow Pull,” but she was still tracking well underneath her body and holding an acceptable posture. 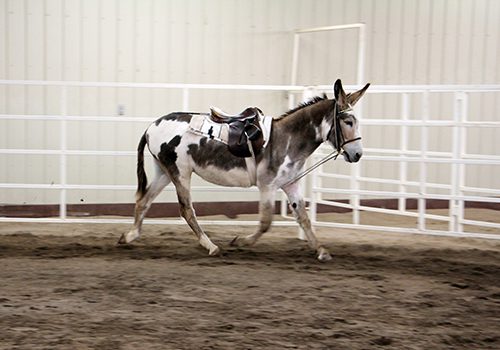 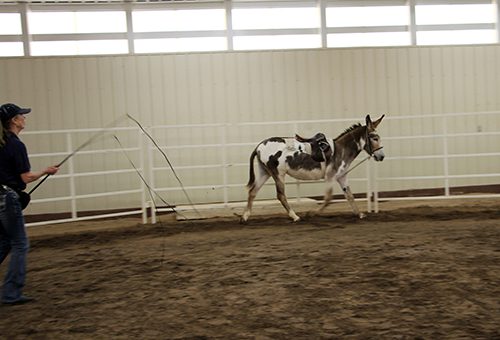 When my female equines are in heat, I lighten the pressure on them and quit when I see they are tiring. This keeps them from getting “grumpy” and helps them to maintain a happy attitude toward me and the training. 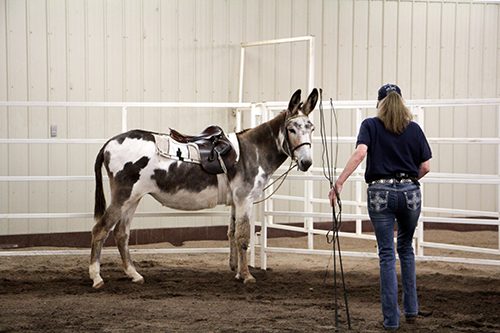 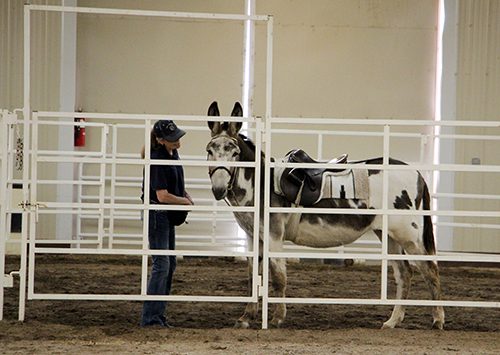 Chasity and I exited the Round Pen in perfect form and then went to get Wrangler. Building a good relationship with your equine makes EVERYTHING easier! 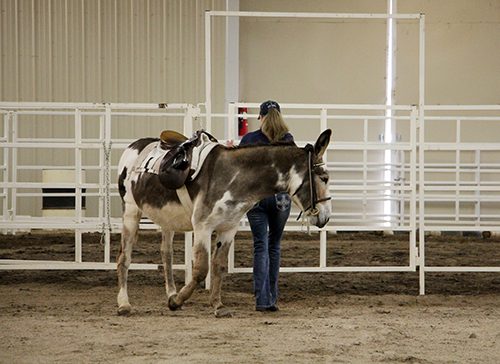 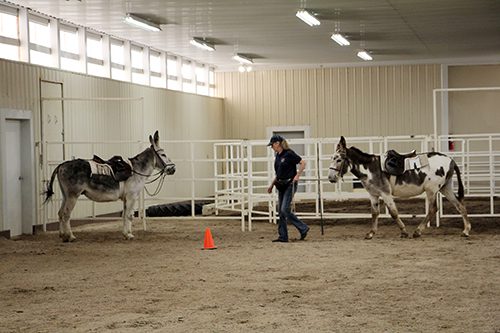 Wrangler was standing sideways to the fence, but moved over promptly upon command. I wanted him on my right. He was still mesmerized by Chasity in heat, but he was still a gentleman and complied with my wishes! I love it when they behave so well! 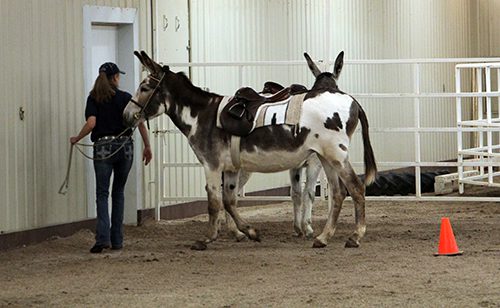 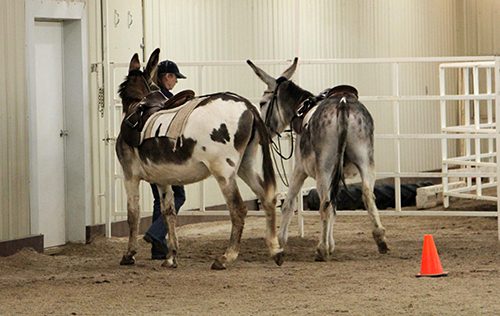 Chasity flirted with Wrangler and he reciprocated while I untied his “Elbow Pull” and released him. Then we all marched together to the Tack Barn where they were untacked, then returned to the barn yard for turnout and more intense flirtation! Love was in the air! 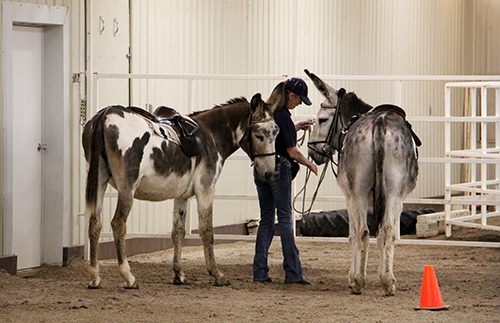 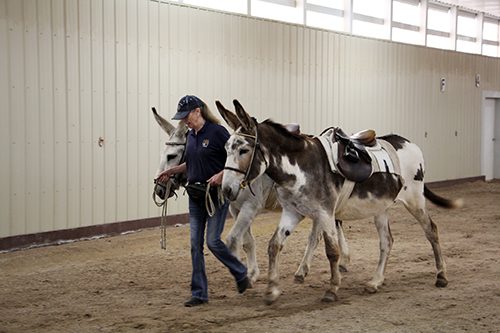