The following update is from American Wild Horse Preservation Campaign

RENO, NEVADA (September 28, 2015) … Pershing County and six public lands ranchers today dropped their lawsuit against the Bureau of Land Management (BLM) seeking the removal of hundreds of wild horses from public lands in the area. The ranchers and the BLM entered into a private settlement agreement that does not commit the government to any action. The agreement merely creates a drawn-out schedule over 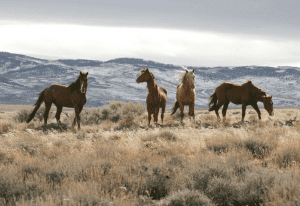 several years during which time the BLM is to consider the removal of wild horses from 16 wild horse habitat areas that overlap public lands utilized by the ranchers for grazing their privately-owned livestock. This dismissal comes three months after the American Wild Horse Preservation Campaign (AWHPC) and Pershing County property owner Debra Davenport were granted intervenor status in the case.

“This agreement is not court sanctioned and is little more than a face-saving way for the ranchers and local government to drop a lawsuit that had no legal merit and was bound to be dismissed by the court,” said Deniz Bolbol, AWHPC spokesperson. “The BLM should not reward ranchers for filing meritless lawsuits by prioritizing the removal of horses from the public lands at issue. Rather, the BLM should focus on humane on-the-range management and fulfilling its legal mandate to protect all wild horses and burros on our public lands in the West. Prioritizing removal of horses in these areas will simply encourage more baseless legal actions by ranchers and their local government allies.”

The lawsuit sought to force the BLM to immediately round up hundreds of wild horses from Congressionally designated wild horse habitat on public lands in Pershing County, Nevada.

The lawsuit was part of an attempt by ranchers, who view mustangs as competition for cheap taxpayer-subsidized grazing on public lands, to use the court system to compel the BLM to remove more wild horses from the range. To date, AWHPC has intervened in five of these cases. Earlier this year, Judge Du granted AWHPC’s motion to dismiss a similar case filed by the Nevada Association of Counties against the BLM, and the U.S. District Court in Wyoming granted AWHPC’s motion to dismiss the State of Wyoming’s lawsuit against the BLM seeking the removal of thousands of wild horses from the range.