Another Augie and Spuds Adventure: 2nd Hitch to Cart

“Here we go again, Spuds, but something feels really different and strange.” 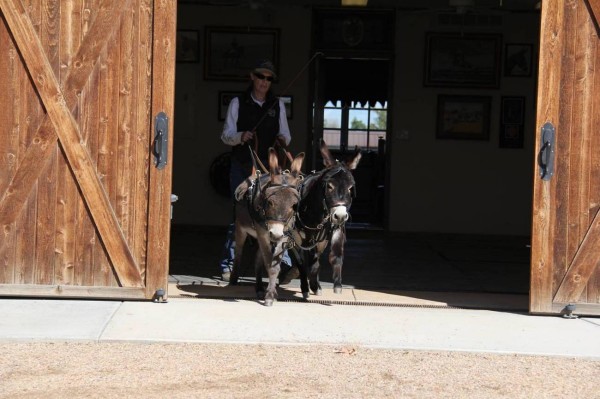 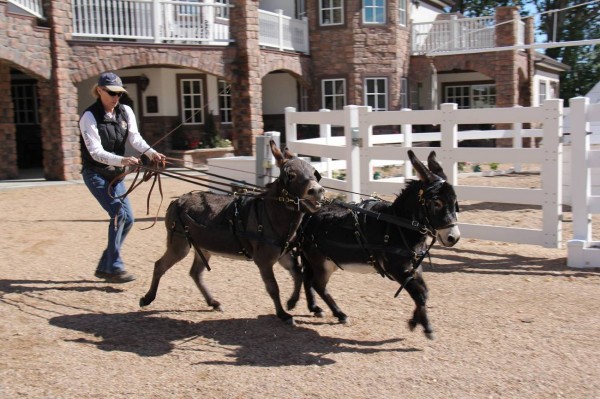 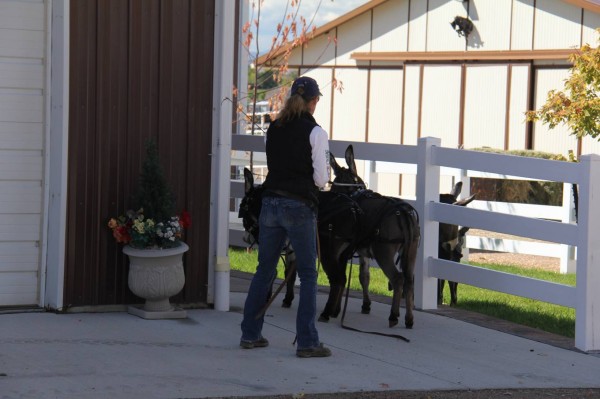 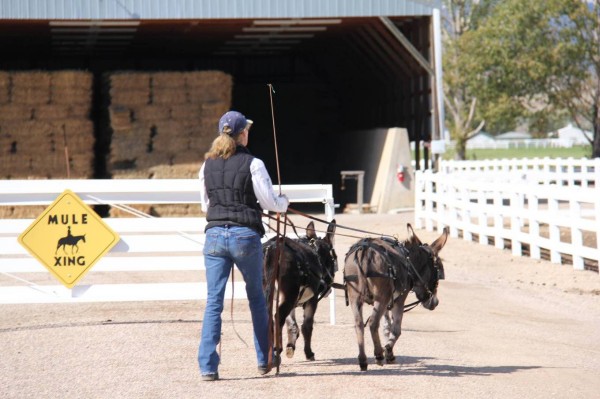 “Whew! I’m glad she switched the lines back BEHIND the terrets instead of in front of them!
It was putting a kink in my neck, Spuds!”

“Me, too, Augie! Besides, I like it much better when I can really FEEL her hands.” 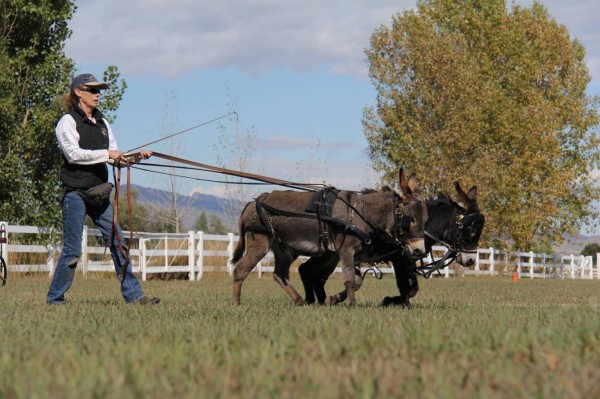 “I’m sure glad she took the time to review ground driving before hitching us up again!” 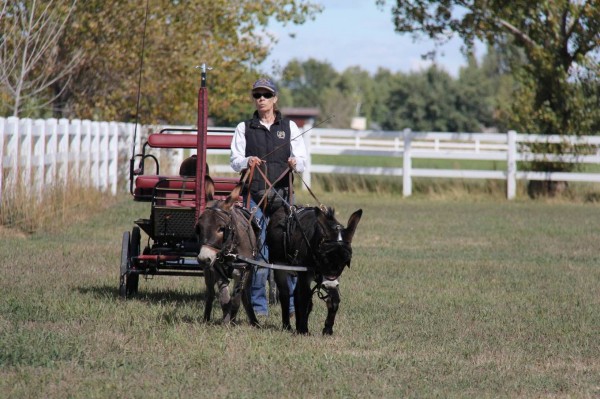 “Okay Spuds, now let’s get lined up straight for her!”
“No problem, Augie!” 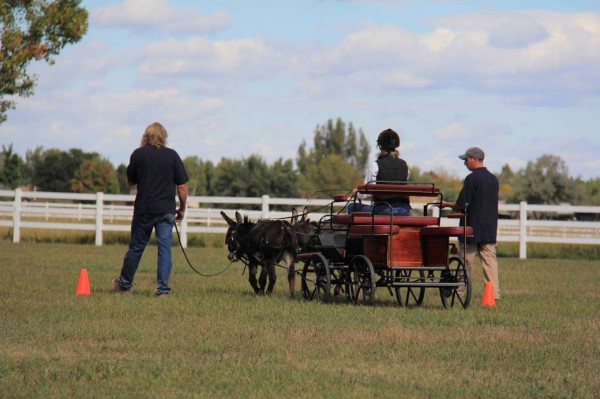 “Hey Augie, I recognize this! It’s the hourglass pattern we’ve been ground driving for
the past few months!” 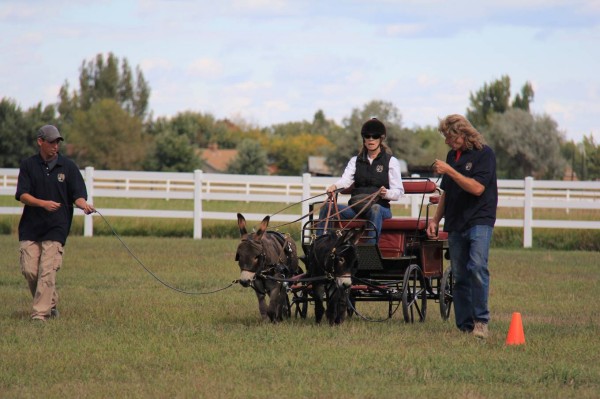 “Are Sean and Steve in sync with us, Spuds?” “They sure are, Augie!” 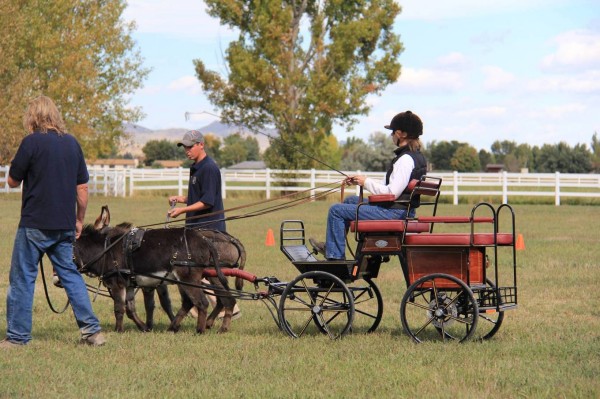 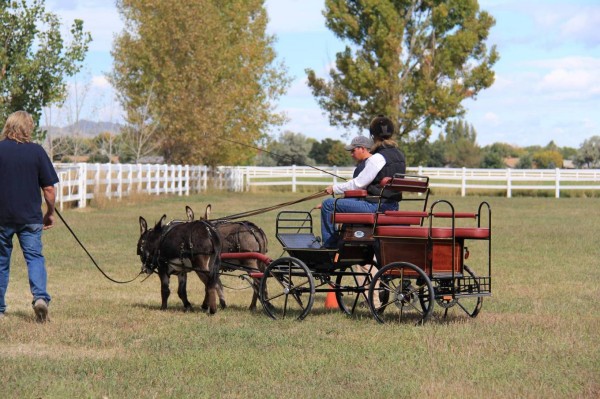 “And we’re off again, Augie!” One…two…three…four…” 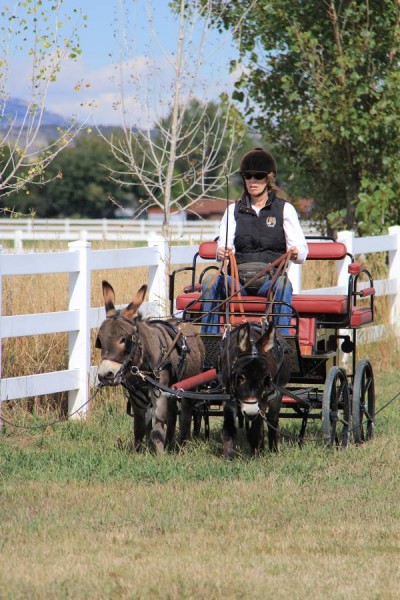 “Yup Spuds, I’m really glad she decided to go ahead and cross the lines BEHIND the terrets even though she said it was ‘against the rules’!”
“Hmmm, this grass looks pretty tasty, Augie!” 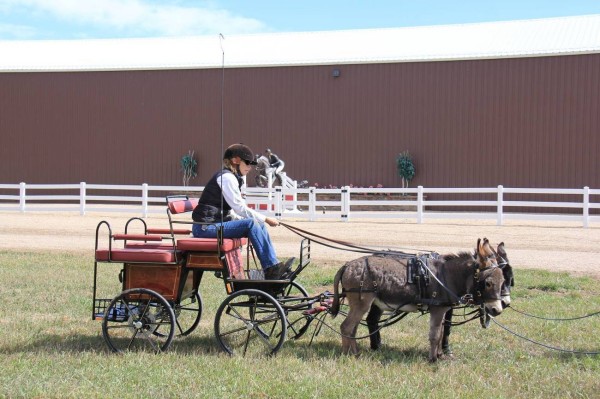 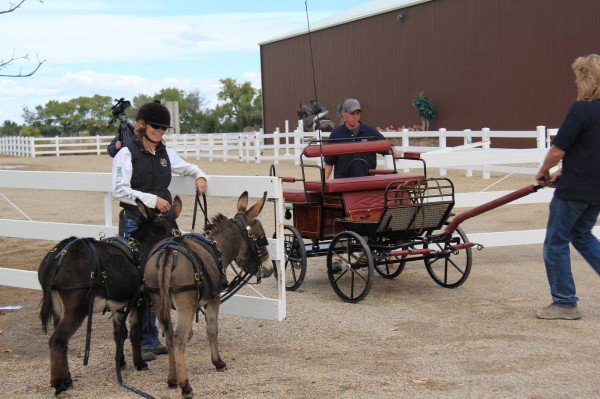 “Hey Spuds, how about next time you pull and I push like Sean and Steve are doing?!”
“Not a chance, Augie!”

NOTE from Meredith: Equines are always honest in their reactions to training. When things go wrong, it is always the handler’s fault. Everything I have learned about driving said that when driving a team, put simply, you should thread the inside lines through the terrets of the opposite equine making the lines cross in an “X” just in front of the terrets. With my larger equines, this never really posed a problem…until I tried it with Augie and Spuds.

I had always ground driven Augie and Spuds single and then together as a team with their lines going directly from their mouths through their terrets on their harness saddles and to my respective hands. I could then clearly feel the connection from my hands to their lips holding all four lines. This never posed a problem until I decided that maybe I should thread the lines in the more conventional way with the lines crossed in front of and running through the opposing equine’s terrets. It worked fine until they got uneven. When I said “Whoa” and pulled back on the lines, the inside lines acted like “drawreins” with too much leverage for their short little necks. The only direct and light contact I had was on the nearside (left) and offside (right) lines of the team. When they could no longer feel the even contact on both sides of their mouths, they both bolted as shown in the picture above. I immediately changed the lines back to their original position with the lines crossing into my hands BEHIND the terrets instead of in front of the terrets. I could then feel the connection on both sides again and so could they. The result was immediate compliance! We were again “connected!”

When using split lines, the draft lines go from the nearside bit ring of the near side equine and the offside bit ring of the offside equine direct to the driver. A series of holes in the coupling lines allow for adjustment. The nearside coupling line passes through the inside terret of the nearside equine and across to the bit ring of the offside equine and vice versa. To avoid any confusion for the equines, I think it is important to train with two sets of lines in the beginning, until they are clearly aware of their job and actually can feel the connection to your hands. I would not advise split lines for beginning training. The connection from your hands to their mouths is too loose and it is hard for them to understand your intent, especially in the case of miniatures since the distance from their mouth to the terrets is so short and the action on the lines can be so severe. Once proficient with four lines, they can then “graduate” to split lines for your convenience.