Save Your Ass Long Ear Rescue is planning for their 2016 Cabin Fever Auction (March 6-13) and are accepting donations of artwork, jewelry, gift baskets, gift cards, tchotchkes, hand- made items, services …anything you think someone might enjoy and be excited to bid on. Donated items do NOT need to be donkey or animal related. Contact them though their website to arrange for donations. Below is an update on Stan, a donkey they recently rescued. 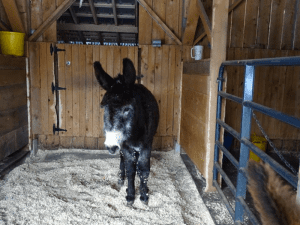 “We recently took in a 35-year old donkey who’s long-time buddy passed away. Stan came into the rescue in pretty rough shape. He was not at all friendly and wanted nothing to do with people or the other donkeys. He was covered in burrs and his poor tail was so matted it looked and felt like a club. His forelock and flanks were chock full of burdocks stuck tightly to his skin. He was examined by our vet and it was discovered that he is blind, with large cataracts in both eyes. He was also in dire need of dental work – it’s doubtful that he had ever had dental work in his lifetime. He had such sharp points on his molars that they actually punctured his tongue, and he had so much tartar build up on the outsides of his molars that the inside of his cheeks had become ulcerated. Every time Stan moved his jaw he must have been in excruciating pain. No wonder he was not friendly!

Well, in the weeks since then Stan has blossomed! He is a new man! He must feel so much better! He is now friendly and seeks attention. He did not want to be touched when he first arrived and now he enjoys being groomed and has a big honk for me in the morning when I go out. He gets on very well considering his age and disability.”