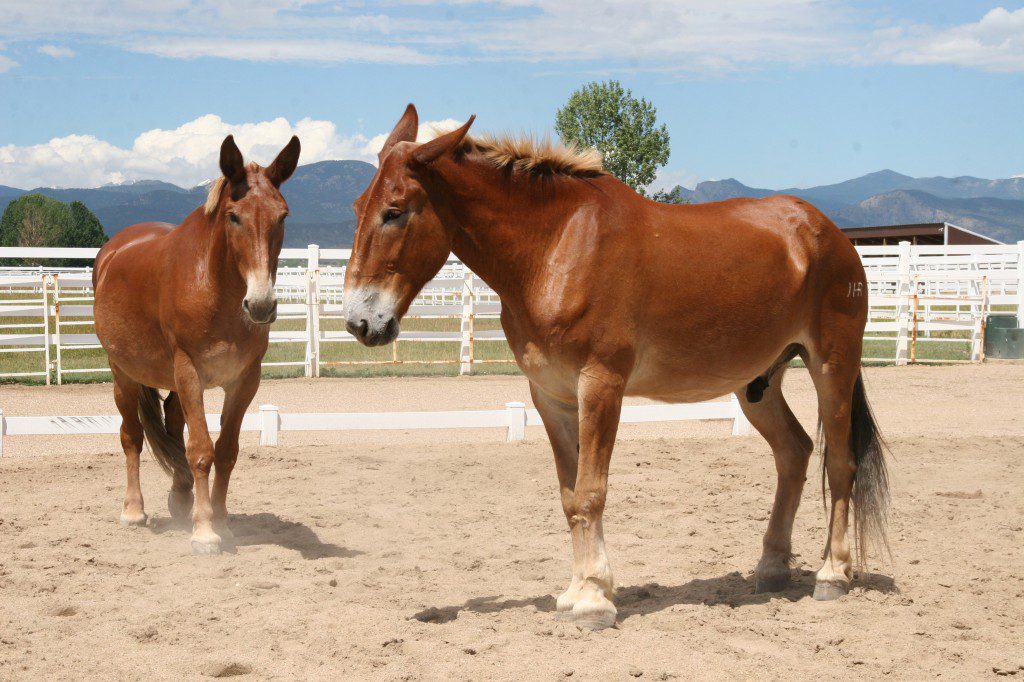 Big boys on the mend, Rock and Roll

Rock and Roll, a 17 and 16-year-old draft mule team came to us on December 5, 2010. They had been rescued from an auction in Kiowa, Colorado, roughly a year before that by some friends of mine. They offered the mules to me as a last resort when their efforts to rehabilitate them failed.

Rock had an old fracture on the face of his pelvis opposite the ball joint in the right hip and had severe founder and rotation in his hind feet. Getting those shod was a real challenge since he could not stand on the bad leg. Roll had side bones in his right hind foot and it is a constant challenge to keep that foot balanced. Both mules had been seriously foundered and had muscle atrophy throughout their bodies. As therapy progressed, even more problems surfaced so we were making progress with one step forward and two steps backwards, but nevertheless, we have been gaining ground with their health.

Both mules began to develop better eating habits and better hair coats almost immediately with their change in diet. Atrophied muscles and calcified joints began to move again. Rock went through several superficial issues that were problematic. The founder began to grow out and he became three-legged lame just about the time a horsefly bit him in the sheath and caused intense swelling. Because he couldn’t move, it wouldn’t go down. We got boots for his front feet since we could not nail shoes to his foundered front feet that enabled the swelling to move from the sheath to his abdomen. We hot packed his abdomen for two weeks and it went down, but he developed a sebaceous cyst that we thought was a sarcoid on front of the withers and a wart on his chin. We got the cyst removed and treated the cyst as a sarcoid which caused the wart to drop off. Rock is now able to resume his exercises and is doing much better.

We are happy to say that both mules are doing well after 10 months of physical therapy with the core muscle leading training exercises that we do here. Roll was able to graduate to moderate round pen work in the elbow pull after about four months of leading exercises. It will be another year of groundwork before the founder is completely grown out. Their respective uses will be determined as their health improves.