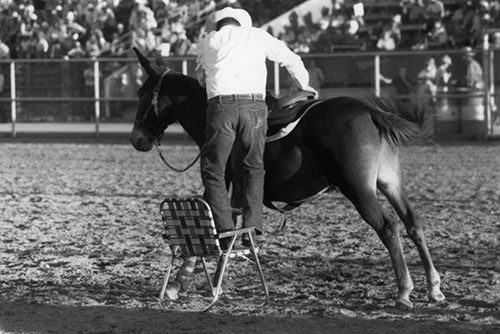 Jack Copp was a very special man with a very special mule. Jack was born in Fairfax, Oklahoma, about 45 miles south of the Kansas border. His father worked with mules in the oil fields acquired
from the Osage Indians by the U.S. Government years before. Although his father was familiar with mules, Jack was enamored with horses and particularly with team roping. Jack, a congenial and responsible man, worked at his job for 27 years and roped steers in his spare time.

Then came the accident that changed his life. Jack was run over by a forklift that left him partially crippled for the rest of his life. He could no longer do the things he loved the most. In the midst of his depression, he met an old man who suggested that he get a couple of mules to mess with. “They’ll git you on your feet,” he said. Jack took the man’s advice and bought Joker, a sorrel yearling mule colt, and his sister, Sissy, a weanling molly mule in November of 1978. By May of 1979, Jack had taught Joker enough tricks to entertain the audience at Bishop Mule Days in California. 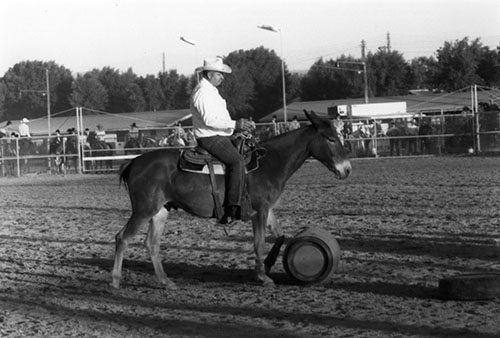 This was where I first saw them. In six short months Jack had Joker (only two years old) stretching, sitting, laying down, carrying his feed bucket, rolling a barrel with his front legs, and walking on his hind legs. What he had done with that handsome young mule was remarkable, but what Joker had done for Jack was even more amazing. Jack’s life was given new meaning and his faith restored by this long-eared, little red mule. Sissy, Joker’s sister, was sold and put into training with famed mule trainer Pat Parelli of California, while Jack and Joker became the very best of friends. 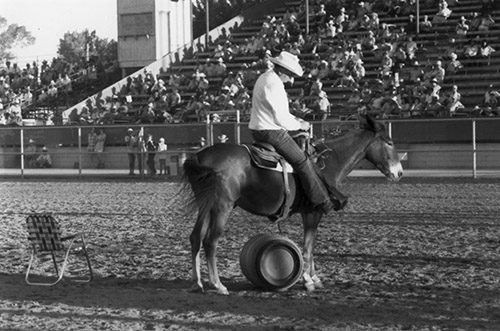 Joker was sired by a Spanish jack, called Red Fox, that was killed by a hunter, and out of a Thoroughbred/Quarter Horse mare. He captured the hearts of all who were fortunate enough to witness his performances. The bond between Jack and Joker was evident as spectators delighted in watching a repertoire of 30 tricks or more. As Jack is a bashful man, Joker often had to push him into the arena to get things started. They began with a good stretch to loosen up the muscles and then Joker was ready to show his stuff. In top condition, Joker showed he could walk on three legs, then on two legs. This was pretty tough for a mule, but he did it out of love for Jack. Joker had no qualms about carrying his feed bucket to remind Jack of dinnertime. But Jack was a demanding trainer and concerned parent and made Joker earn his dinner by rolling a barrel with his front feet. When rolling the barrel forward became boring, Jack taught him to roll it backwards with his hind legs. As if this weren’t tough enough, Joker later learned to roll the barrel both backwards and forwards while straddling it! All this work is sometimes tiring, so Jack thought a short nap would be in order. Joker obliged his command by lying down–his rump made a handy seat for Jack to also take a rest. 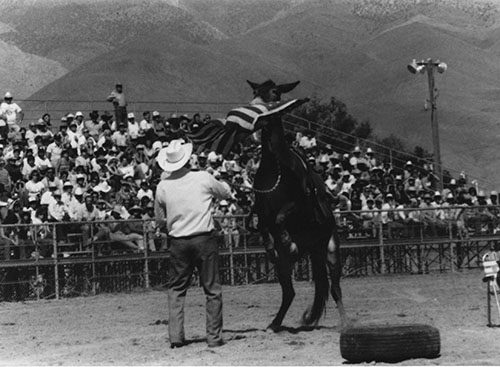 At coffee break time, Joker took his shorter rests in a sitting position. Considerate of Jack, as a best friend should be, Joker stretched, lowering his back so that Jack could reach the stirrup easily to mount. Joker knew that tires are for traveling, but his only use for one was to plant his front feet on it, traveling around it with his back feet; or to plant his back feet on it and travel around it with his front feet. At the “End of the Trail,’ Joker placed all four feet on the tire, exhibiting his excellent balance. Jack and Joker were patriotic Americans. Joker would fly the flag while walking on his hind legs. Then Jack would take the flag while Joker bowed to the audience in appreciation for the applause! 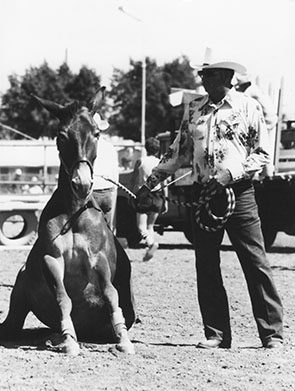 Not limited only to tricks, Jack removed the bridle and showed people how well trained Joker really was. Without the bridle, Joker performed pleasure, reining patterns, and trail obstacles with ease. No whips, no spurs, no bats–it’s all done with patience and love that you can feel as you watch them. They were quite remarkable! Jack believed that training a mule is like raising a child. If you slap them, bang on them, or worse, they will have no respect.

Mules will either be afraid of you or fight back. Of course, discipline is in order on occasion, but you don’t have to keep doing it. Once Jack began training Joker, Joker was not allowed to run with other animals. Jack was his only close companion. Others never distracted Joker from his best friend, Jack! Jack and Joker have performed at county fairs and shows throughout the U.S. and they were both loved and appreciated wherever they went. The fees for these shows were minimal–just enough to cover their traveling expenses. What a privilege it was to witness this incredible pair!