MULE CROSSING: In Appreciation of Mules

We have all heard the numerous negative myths about mules that abound, but have you ever thought of a mule as a hero, as an extraordinary member of our society? The mule’s history can be traced back to Biblical times, and in those days, he was known as the preferred mount of royalty. Given his ancestry, this should not be surprising. After all, is he not the offspring of the chosen mount that Jesus Christ rode into Jerusalem? As Jesus was the Son of God, so is the mule the son of the chosen donkey. And he has much to teach us about ourselves and our world—if we could only learn to observe and listen carefully to what he is telling us. The mule can be a catalyst for health, happiness and prosperity, but we must learn to do our part in appreciation of him. 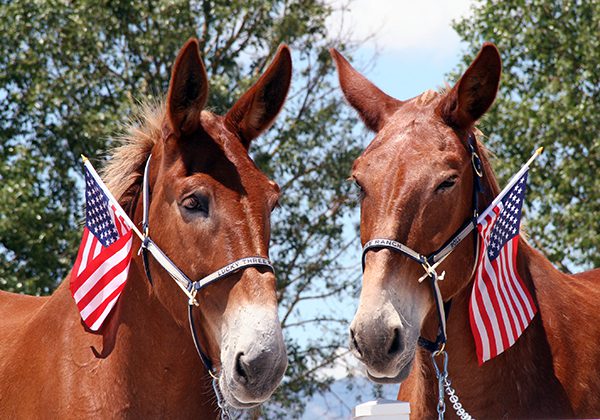 Although he is often confused with his sire, the donkey, the mule is the symbol of neither the Republicans nor the Democrats. During past political campaigns, certain Republicans actually declined to have their picture taken with a mule, because they were either ignorant of the difference between a mule and a donkey, or they were afraid that the mule would be mistaken for the Democratic Party’s symbol—the donkey.

As author Melvin Bradley notes, “Democrats in mule states have always been friendly to mule-loving voters. With a farm population of 25 percent of the total, votes from mule people could make a difference.”1As presidential candidate Harry S. Truman discovered, this was politically beneficial information and he used it wisely. Finally, on May 31, 1995, Governor Mel Carnahan signed a bill designating the Missouri mule as the official state animal.

When people are open and fortunate enough to be able to engage in intimate communication with the mule, they soon discover the redeeming and heroic characteristics of the donkey (that are naturally present in the mule). The donkey is the embodiment of various moral truths, which is why he is used as an appropriate hero in numerous fables. He possesses the ability to serve without judgment of his master. He is affectionate, thoughtful and humorous and carries his burdens without complaint. We are often dismayed by the true reflection of ourselves that we are destined to see while in his presence. The donkey is a creature of wonder and augury, and glimpses of these same characteristics can be seen in the mule. Although the donkey is the symbol of the Democratic Party, his effect on people is subjective and universal, and is not restricted to just one group.

I’d like to share one of my favorite stories, illustrating the mule’s legendary endurance and great heart. According to author Walter Rickell, “When General George Custer made his campaign into the Black Hills in early 1870, Buffalo Bill led him the first day as his guide. Custer and his staff were on their finest horses brought from the east, and they were prancing and ready to go. Suddenly, Buffalo Bill appeared on his little grulla Comanche mule, Mouse. Cody paid no attention to the way the officers ridiculed him and the mule—Cody had ridden Mouse before and found he could run a good lick, but his strongest point was his endless endurance. Custer, noting it was Cody’s intention to ride the mule, called a halt and informed him it was no time for pranks, that they had to travel fast, and Mouse could never stay out of their way. Cody said nothing, touched Mouse with his spurs, and led off, the column following. By the early afternoon, in terrific heat, the horses were lathered, and Cody had to stop several times for the column to catch up. The general was surprised that, at camping time that night, Mouse was still in the lead. Custer tried to trade his fine horse for the mule. Cody rode Mouse back that night over the same trail.”2 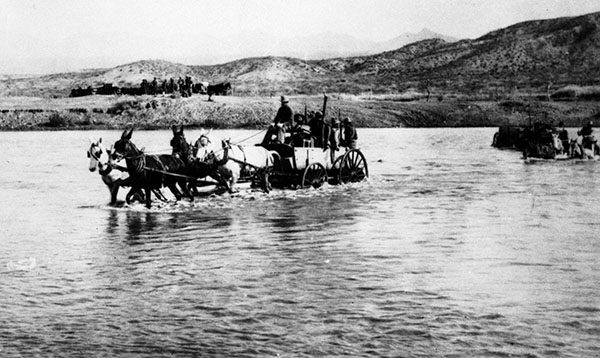 Mule stories from the past are numerous in this great country of ours. The number of mules (and horses) in the U.S. peaked in 1919, at 26.5 million. The United States of America was quite literally built on the backs of its mules—they pulled supply wagons in the cities, forged west with the early settlers across the vast prairies, packed hunters’ gear in the mountains, plodded underground with the coal miners and plowed the Southern cotton fields. They have participated in war alongside our brave soldiers, and have found their place in the field of entertainment. They even helped with the excavation of the Pasadena Rose Bowl. 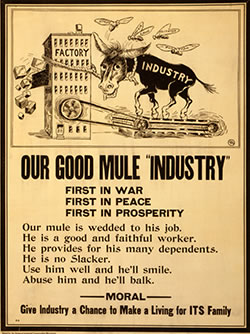 After the onset of the Industrial Revolution, the number of mules in the U.S. declined, and in 1967, there were less than ten thousand. But happily, in recent years, renewed interest and public awareness have sparked a steady increase in the mule population.

Those who work with mules know that interacting with them can keep a person healthy and happy. The typical mule person gets up early in the morning to feed and water his mules, and then goes back to his house for his own breakfast. Then it’s back to the barn to harness or saddle up and make way for the day’s activities with the mules. There is much to learn from a mule in every interaction, and if he isn’t doing what we want, then we probably haven’t asked the right way. When we do, he complies and, in the process, teaches us about real patience, love, respect and good manners. There is no more loyal friend and companion than a mule. As the old mule skinners will tell you, you either love ‘em or you hate ‘em. You either get along with them or you don’t—there’s no in between with a mule. 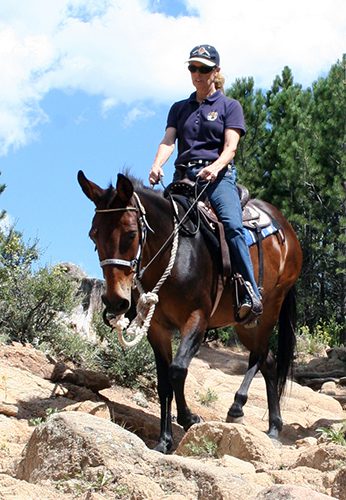 Obviously, I have one of the worst cases of “Mule Fever” ever suffered! But then, here I am—older, wiser and without any broken bones due to my association with mules. In fact, I can say my life was saved by one of my own mules. I was on my mule, Mae Bea C.T., leading a group of four trail riders on horses up a switchback in the Rocky Mountains, when the trail began to get very narrow. It was 100 feet straight up on the right and 100 feet straight down on the left! I could not see very far ahead because the two-foot trail wrapped around a huge boulder and blocked my forward vision. As I rounded the boulder, with the horses right on my rear, I was faced with a trail that disappeared into a wide landslide of small rocks. I couldn’t go forward and, with the horses directly behind on the wider part of the trail, I couldn’t back up. The horses could turn around where they were, but I couldn’t. I waited for the horses to get turned around, and then indicated to Mae Bea C.T. that I wanted a tight turn on the haunches. She sat her rear back on her haunches and swung her front legs over the 100-foot drop in a smooth and effortless 180-degree turn, facing next in exactly the opposite direction. She then stopped and waited for my next cue to lead the horses safely back down the trail. I shudder to think what could have happened had she been a nervous horse.

“Mule Fever” happens when you find yourself hopelessly involved with a mule…or many mules! Suddenly, there is no other equine that will do. Many people liken a mule to a dog, but dogs are unconditionally faithful and submissive, whereas the mule challenges your soul. He innocently challenges you to be the best (or worst) person you can be—more like very young children would do. You might as well be tangling with an elephant if you don’t learn how to correctly ask the mule to do what you want. Most folks end up just dangling at the end of a lead rope or hanging on for dear life during a runaway—if they are lucky enough not to get dumped on the ground and possibly stomped on or kicked! If a person finally learns what a mule has to teach, there cannot be a more reliable, intelligent and loyal friend.  At the end of a day spent with mules, one is tired, but it’s a good tired. The activity has increased circulation throughout the body, making the body tired and the mind alert. This makes for a good night’s sleep, and the next day, the cycle begins again—with joy! 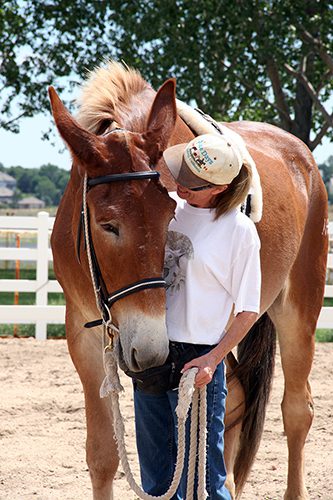 Although the therapeutic value of the mule goes back as far as his own history, the idea of intentionally using mules for actual therapy did not come until much later. One of the most successful therapeutic stories involving mules is that of the Vision Quest Wagon Train. Vision Quest founder, Bob Burton, had a dream to use mules and the discipline and hard work of a real wagon train to help troubled kids. So, in 1976, the first Vision Quest Wagon Train was launched. In this life-changing program, 36 at-risk teens were required to spend one year traveling with six mule-powered wagon teams that went south in the winter and north in the summer. During the journey, the kids learned positive social skills and responsibility in caring for themselves and for their animals, with a solid success rate of 60 percent. (Mules really do make the best teachers!) Today, plans are being made on Facebook for a Vision Quest Wagon Train Reunion in 2012. Clips of the Vision Quest Wagon Train journeys can be seen on YouTube.

In 1985, an attempt was made by the Lynchburg Mule Trader’s Association, supported by the leadership of the Jack Daniels Distillery and U.S. Representative Jim Cooper, to designate October 26th as Mule Appreciation Day, in commemoration of George Washington’s receipt of Royal Gift, America’s first mammoth jack, from the King of Spain. Jack Daniels itself sponsored the first Mule Appreciation Day to gain publicity and support for the petition, which was passed by the House of Representatives by a substantial margin, but failed to pass in the Senate. The bill was later sent to a referral committee, where it languishes today. (Leave it to Congress to get our half-ass half-passed!) However, the spirit of mule lovers is undaunted—Mule Appreciation Day rose from the dead and has been celebrated ever since, even without the blessing of Congress. We red-blooded Americans love and appreciate our mules. Gratitude and appreciation are never outdated!

1The Missouri Mule: His Origin and Times, Volume II, by Melvin Bradley, Curators of the University of Missouri, page 353.