Please enjoy this historical post about their Longears from our friends in Switzerland!

Opening of the Swiss National Museum in 1898

This year (2018) the Landesmuseum (Museum of the Country) in Zurich will be 120 years old. It is the most visited historical museum in Switzerland. Since January 2011 it has been part of the Swiss National Museum. Due to an increasing lack of space, it was extended from 2013 to 2016 with a modern extension that offers space for exhibitions, a library and a lecture hall. 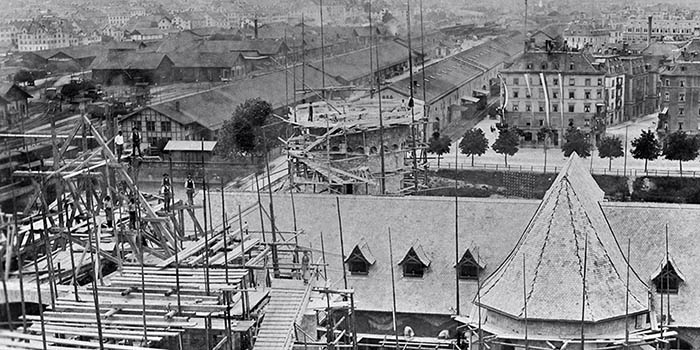 A “central collection of art objects” was thought of as early as 1799, but the idea failed because of resistance from the cantons, which wanted to maintain their own historical collections. In 1890, however, the Landesmuseum was founded by law and then built as a castle-like building by Gustav Gull next to Zurich’s main railway station.

On 25 June 1898, the opening ceremonies took place, including a large parade. In 20 pictures the Swiss cantons passed by with 70 richly decorated carriages, 200 riders, groups in traditional costumes and various animals. The procession was led by a “magnificent carriage with Helvetia*”, followed by a carriage with “Turica, the protector of art”. In the group of the Canton of Valais, besides horses and Saint Bernard dogs, mules also passed by. 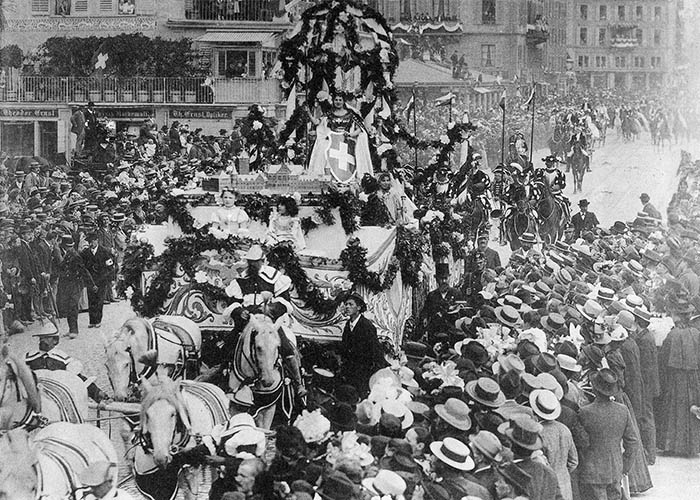 “It’s as if the parade of the traditional costume doesn’t want to end and the impression of the pictures is still increasing. The Valais is a true gem of a group, it shows a military picture, the festive parade in the Lötschen Valley, in addition come the women from Savièse village with her strangely (gorgeous/special) beautiful type, the gentle women from the Evolène Valley with their white delicate lace bonnets under the flat hat, the women from the Illiez Valley, who wear a dark man’s costume on Sundays, the monks of St. Bernard with their dogs and wandering people, which are today in the Rhône Valley in the vineyards, tomorrow on the mountain pasture. How the lovely little one laughs, strapped to a mule in his cradle, on which the mother rides. And everything is so wonderfully real, the pictures are talking books, the enormous originality and diversity of Swiss folk life, and the people of Valais are in first place, the strange people, where cheerfulness and deep seriousness merge into the most surprising nüances.” 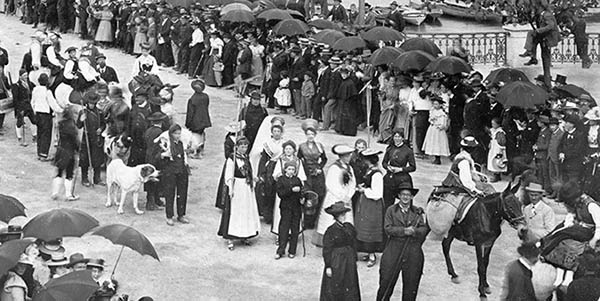