From Rescued Horse to Dressage Championships 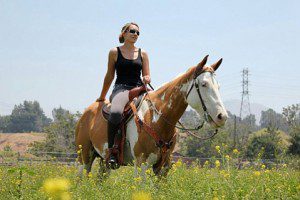 The following story is from the Santa Barbara Independent.

Most horses that contend at the highest level of equestrian competitions come from large ranches and carefully selective breeding. That’s not the case for Soby, the rescue horse equestrian that trainer Kaili Graf will be riding at the Western Dressage World Championships in Tulsa, Oklahoma, this coming November.

Kaili rescued Soby back in 2010 as a baby when she was neglected and left out alone in a field. The two had an instant connection, as rider and horse developed a strong partnership in a short time that would typically take weeks for other trainers.

“As soon as I saw her, I said, ‘This is not a normal horse,’” said Graf, a trainer who has been riding horses for as long as she can remember. “Soby has a goofy personality, but she loves to work.”

Soby was one of the earliest rescue horses that Kaili ever worked with, and as such is a bit of a “poster child” for rescue horses competing in Western Dressage, having won four state titles in 2014. A new discipline, Western Dressage’s influences date back to the 1700s with the ranches of the American West and Spanish vaqueros. Western Horsemanship meets the English Classical Dressage in a style that emphasizes “lightness” and “subtle cues.”

For Kaili and Soby, the goal in competition is to execute techniques as a single unit and to make their movement as instinctive and intuitive as possible. The importance of this upcoming World Championship goes beyond personal aspirations, however, as Kaili wants to advocate for the sport and rescue horses. “I want to inspire the riders who think they could never make it,” says Graf. “There’s an existing structure that no one wants to challenge.”

If Kaili and Soby can prevail at the World Championships, it will show that rescue horses and anyone from modest means can find success with hard work. The cost of competing is not cheap, though, so the duo can use all the support they can rally.