A few weeks ago, I, along with several other AWHC representatives, had the opportunity to attend the release of 123 of the 435 wild horses captured during the Bureau of Land Management’s (BLM) roundup in the Onaqui Mountains Herd Management Area (HMA) in Utah the month prior.

While our hearts break for the 312 who will never see freedom again, we want to pause and recognize the significance of the return of these beloved wild horses — including 58 mares, 60 stallions, and 5 foals — to their home on our public lands. This brings the population in the Onaqui HMA to approximately 210 horses — the high end of the “appropriate” management level (AML). This is a departure from BLM policy, which generally aims to reduce horse and burro populations to low AMLs.

Watching these horses released to freedom was exhilarating, especially after seeing so many wild horses lose their freedom over the last decade. It is a memory I will cherish for a lifetime. Kimerlee Curyl, noted wild horse photographer and AWHC spokesperson, was with me on that day and recorded some footage that I want to share with you: 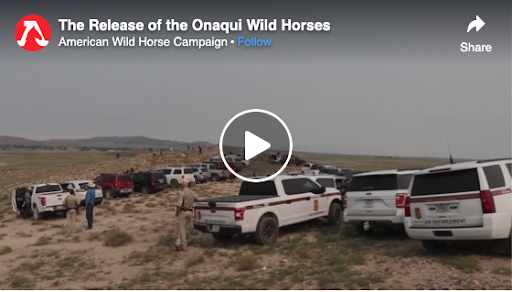 The release wasn’t perfect. Three mares scheduled to be returned to the range became sick in the holding pens and died. A fourth mare is recovering in a BLM holding pen. One mare released to the range was observed to be sick and was euthanized hours after being freed. The BLM has yet to release the cause of the illness. Other released horses are being monitored for potential sickness. As soon as AWHC receives more information, we’ll be sure to let you know.

It’s important to remember that these tragedies are not the fault of any individual BLM employees, all of whom tried their best to ensure the safety of the horses. Instead, they are the inevitable outcome of a system that relies on capturing and penning these iconic wild animals instead of protecting them and managing them humanely in the wild.

AWHC fought hard against the Onaqui roundup and we continue to oppose helicopter roundups as a means of population control. But we were able to find common ground with the BLM on the return of some of the captured horses to the wild.

The BLM allowed AWHC to designate a representative to be onsite at the trap during the roundup to identify horses and we were proud to partner with the Onaqui Catalogue Foundation (OCF) to get this job done. AWHC, OCF, and the Wild Horses of America Foundation also provided recommendations to the BLM on criteria for returning horses to the range based on genetic viability, social bonds, and the welfare of the more senior horses in the herd. This input was considered by the BLM when making the final release decisions.

Most importantly, BLM Utah has committed to working with us and others to ensure that this is the last helicopter roundup that will ever take place in the Onaqui Herd Management Area.

We take the BLM at its word and will work with our partners and the agency to make this goal a reality.

Over 300 of the Onaqui horses remain in BLM holding facilities and will be placed up for adoption and sale in an online auction beginning October 12. It’s our job to speak up for the wild horses of this cherished herd along with the thousands of other wild horses and burros that are rounded up year after year and we invite you to join us.

If you’re with us in the fight for freedom for America’s wild horses and burros, will you make a donation to AWHC to fuel our work today?

P.S. Check out our blog documenting the event for more information and footage of the Onaqui release!