This is a repost of an article from harnesslink.com. 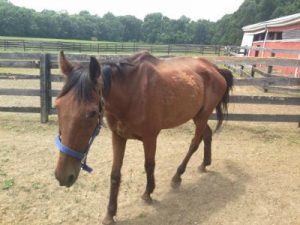 The Standardbred Retirement Foundation (SRF) says its recent spring follow-up of all its adopted horses led them to the pain and suffering of one, and the missing of three others.

The 22-year-old gelding, Uncle Milt, had been in a home for nearly 3 years and the SRF had always received a prompt veterinary follow-up form every spring and fall, until this past season. SRF asked a long-time volunteer to visit after several attempts to reach them by telephone and mail had failed.

The horse was found in poor condition. A relative of the adopter later called and explained that her uncle, the adopter, had passed and they were caring for the horse but were having trouble keeping weight on him. The SRF tried to work with the family but a visit again resulted in removing the horse from their care. Ironically, the horse was accompanied in the field by another horse in great weight.

A Standardbred owner, an experienced investigator, who is happy to help, is looking into the location of the three that are missing.

The SRF urges everyone, who finds a home on their own for their horse, to have a written agreement giving them the right to reclaim the horse if they are not satisfied with the care; protecting the horse from being transferred or sold; and permitting them to physically see the horse or requiring that the adopter provide documentation from a licensed veterinarian on the condition of the animal no less than semi-annually, as a horse’s condition can deteriorate in a matter of a few weeks.

SRF has not experienced any nays from potential adopters due to its requirements, unless the person was interested in selling the horse.

SRF is unique in that it has a follow-up program, and it is solid. “Putting a horse in a home with no protection is a crap shoot with very bad odds,” says Paula Campbell, SRF’s President. “We keep a database with statistics, and it is frightening to see that 76% of first homes for these horses result in the need for another, and 46% need 2 or more homes.

If that doesn’t scream, “follow up” I don’t know what does. In NY a great deal of Thoroughbred money goes to adoption programs and the horses are put out there nearly free and clear of any protection. Many are later found at the “kill pens.”

Uncle Milt is receiving rehabilitative care with SRF, but with his age over 20 it is not likely that he will be adopted again. If so, he will remain available for adoption but will be assumed retired for life with SRF under the organization’s expense. To help or for more information contact Tammy at Admin@srfmail.com or Adoptahorse.org.