The following is an excerpt of an article by Pat Raia for TheHorse.com. 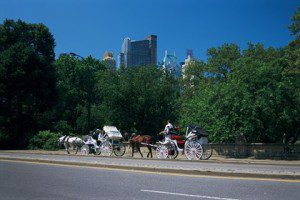 New York City’s carriage trade would be down-sized and its horse stables relocated to a renovated Central Park facility under an agreement between Mayor Bill de Blasio, the city’s carriage cabbies, and Teamster carriage driver Steven Malone. The agreement would reduce the number of horses on New York City’s streets from 220 to 75.

In 2014, the nonprofit organization New Yorkers for Clean, Livable, and Safe Streets (NYCLASS) called for a citywide ban on horse-drawn carriages on grounds that the carriages were inhumane. At that time, 16 members of the city council pledged to support a NYCLASS ordinance that would replace horse-drawn cabs with electric vintage-replica cars.

The proposal sparked controversy between some equine welfare advocates and carriage horse owners and drivers who argued that further regulation would force them to relinquish their horses to new owners. It also spawned several copycat proposals in cities across the United States, including Chicago, St. Louis, and Salt Lake City.