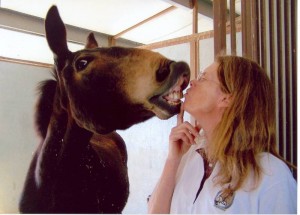 Even though I know how well trained my equines are, they never cease to amaze me! I can be dog tired and know that this is the day they must be groomed, wormed and vaccinated…all thirty of them! The very thought is quite literally exhausting on occasion. Though my staff helps with maintenance doctoring what are now mostly older and geriatric individuals, I still basically train and manage all my equines by myself. When I am tired and a job must be done, I am repeatedly reminded of how well I have done with all of them. All the worry and stress about having to go out and work is washed away the minute I get out to the barn with their never ending affection, interactive neighs and brays and ultimate compliance. 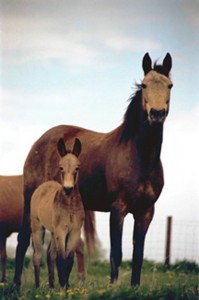 Lucky Three Cyclone is a thirty-one year old, 14.2 hand Arabian mule, the very first mule born here at the Lucky Three Ranch. When he was first born, his mother dropped him on the ground and turned to look at him in total puzzlement. He had long fuzzy ears that she certainly did not recognize that caused Angelique to bolt away from him. Being her very first foal and a mule at that, she was not interested in him at all. I had to restrain her to get her to allow him to nurse. This was his first introduction to LIFE!

Cyclone was trained in English and Western Pleasure, Reining, Second Level Dressage and even carried my185-pound husband over two and eventually three-foot jumps for several years. He was kind of a spooky “Little Feller” as I affectionately called him and he used to scare our farrier half to death when he went to trim the back feet. Cyclone had a ticklish butt, so if you touched him on his behind and he wasn’t expecting it, he would quickly tuck his butt and scoot out of the way. Of course the farrier thought he was getting ready to kick, but he never kicked anyone ever. He was just trying to be polite and get out of the way. 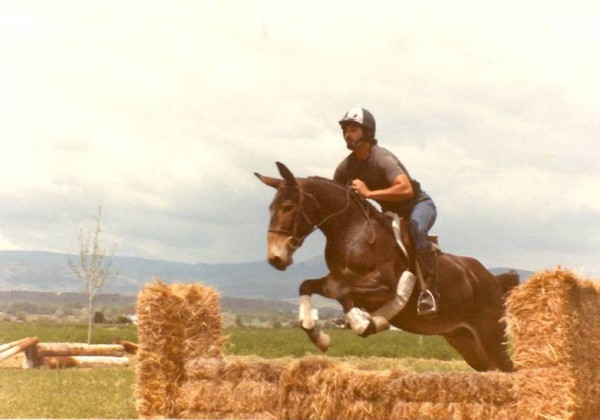 Four years ago, Cyclone began to develop little nodules on his upper left front leg, on the right side of his neck and shoulder, and on his right cheek. The one on the cheek was the largest although with a simple application of Neosporin, they did not seem to be spreading or getting larger until just recently when four more popped up within three months. I was concerned that they could become too numerous to manage if we didn’t at least get a biopsy and find out exactly what we were dealing with. My amazing veterinarian Greg Farrand and I thought they were sarcoids and he later said he had done some research and that they could be “cattle warts” which is another name for certain sarcoids. He too was concerned that they had begun to propagate so quickly all of a sudden so we opted to do a biopsy. I apologize for not having photos of the biopsy surgery for you, but my staff photographer faints at the sight of blood! 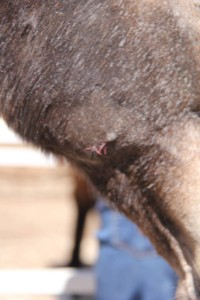 We decided to biopsy the one on Cyclone’s cheek since it was the most mature nodule. Rather than sedate him, we opted to give Cy the opportunity to cooperate with our plan. Cyclone loves to give kisses and was busy giving me kisses in exchange for oats just before the surgery. Greg asked if I could get him to hold his head a little higher, so I carefully lifted Cy’s nose to my shoulder and set it there. He affectionately leaned his head into mine where we met eyeball to eyeball. I took a deep breath and closed my eyes as Greg approached with a syringe of Xylocaine to numb the area locally.

As Greg poked and prodded the needle into the nodule, Cy never moved a whisker. I would open my eyes at intervals to find him comfortably relaxed upon my shoulder with not a hint of stress in his body. When Greg walked away to get the scalpel, Cy gave me another kiss and I responded with another handful of oats. Greg returned and began cutting, but Cyclone was still chewing. When Greg said, “It’s a little hard to do this while you’re chewing,” Cy abruptly stopped chewing and again stood stock still, returning his chin back to its place on my shoulder. Greg had to clamp a bleeder vessel, but even that didn’t bother Cy. When that was finished, he again gave me a kiss and I gave him more oats. As soon as Greg approached with his florescent pink stitches, Cyclone again stood like a soldier while Greg carefully stitched up the wound. Another kiss…more oats…and he was happily taken back to his stall. I am so glad I took the time to train slowly and develop this mutually satisfying relationship with all my equines. Being older and much more vulnerable than I was in my youth, I truly appreciate what I have learned from my equines so we can all grow old together and be safe, happy and healthy doing it! 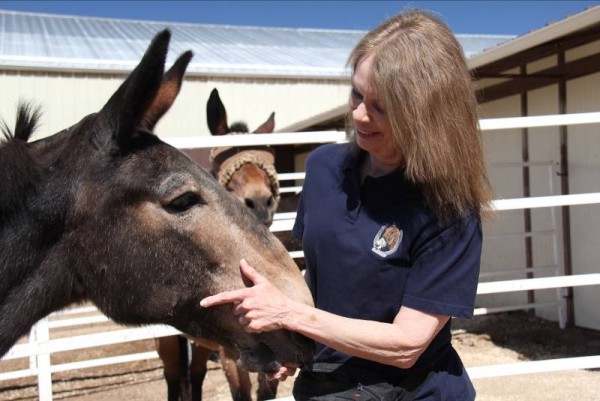