The following is an article from the Horse. 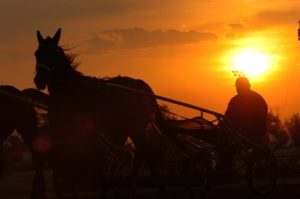 In a groundbreaking move, Australian racing authorities have declared a nation-wide ban on the use of whips in harness racing.

Harness Racing Australia (HRA) announced Dec. 10 that no whip use will be tolerated on any of its tracks as of September 2017, making it the second country worldwide to ban whips in harness racing (Norway was the first to implement a ban).

However, an important distinction is that the Norwegian ban came down from a government decision, where as in Australia, the interdiction results from a decision by the national racing authority itself, a leading equitation scientist said.

“In Norway, the move was triggered by animal welfare legislation, but the HRA announcement represents the first time a racing authority has taken the lead and voluntarily walked away from the whip,” said Paul McGreevy, BVSc, PhD, MRCVS, MACVS (Animal Welfare), professor of animal behavior and animal welfare science at the University of Sydney.

Starting Sept. 1, 2017, HRA will no longer allow whips in racing or training, a decision that “was not taken lightly, but was made on our own initiative because we believe it is the right decision at the right time,” said HRA Chairman Geoff Want.

“We have been moving down this path for six years by limiting (whip) use with a strong focus on health and welfare of horses,” he said. “We see the ban as a vital way of demonstrating our responsibility as an industry, and to earning and maintaining the social acceptance and sustainability of harness racing.”

Their thought processes included a recognition of the fact that whips have not actually made horses run faster, McGreevy added. “The HRA announcement is a win for the sport and for horse welfare. It comes as industry figures show that, even though whip use has been increasingly limited, race times have been improving,” he stated in an online commentary.

This could be related to simple basics of equitation science—negative reinforcement and habituation, he told The Horse. If horses are whipped, then go faster, then are whipped again, they could quickly learn that going faster doesn’t make the whipping stop.

“The decision is welcome news,” McGreevy said. “The HRA has recognized that you can—and should—have an even playing field without whipping tired horses in the name of sport.

“This is the prime example of what can be achieved for animal welfare when the industry wakes up and smells the coffee and works with welfare organizations to arrive at decisions that are good for both the industry and animal welfare.”

While the decision is a victory for trotting and pacing horses in Australia, whips remain allowed in Thoroughbred racing, McGreevy added. But, he added, “the Thoroughbred racing industry is presumably feeling a lot more pressure than it did before because of this groundbreaking gesture in the name of animal welfare.”