What’s New with Roll? Riding in the Arena

Over the summer of 2012, Roll was doing better than ever. All the lead line work, lunging and ground driving in good posture solidified Roll’s core muscle strength and coordination and he began to hold his good equine posture automatically. What was once difficult and awkward for him has become his normal way of standing and moving, so we finally moved from the round pen work and into the open arena. Roll was happy to be working in a new place. We first walked the hourglass pattern around the cones which was familiar for Roll and he was able to see everything he would encounter on the perimeter of the arena. He stayed smartly in step just as he had done in previous lessons. 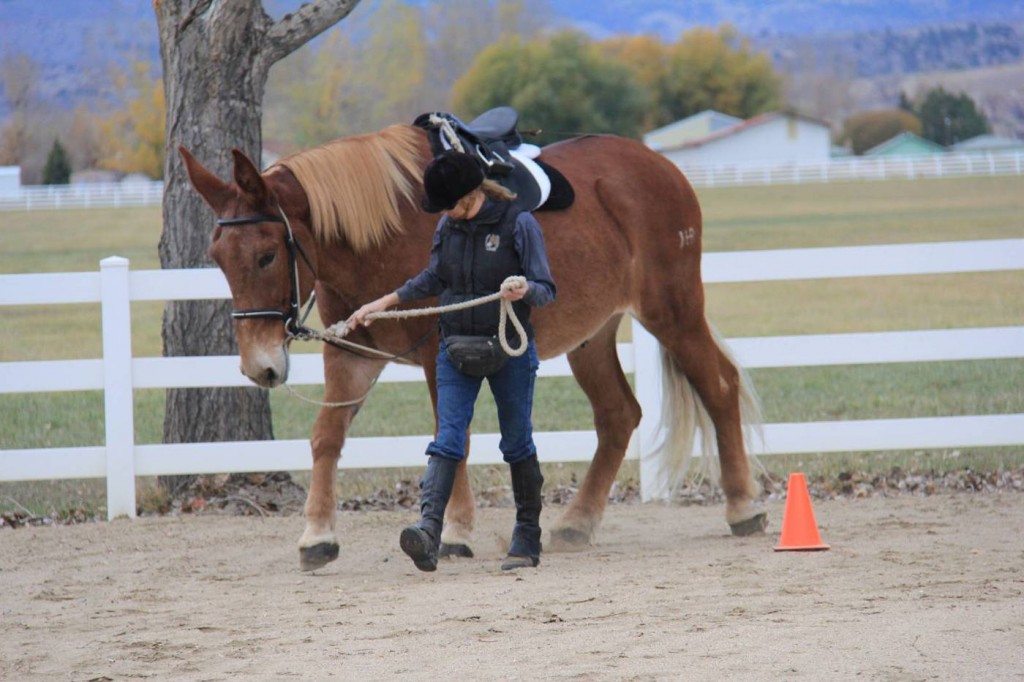 Roll wore his elbow pull to continue to remind him of his good posture. Repetition and having the elbow pull to lean on further solidified his way of standing and moving. If he did make a misstep or stumble, he was able to regain his balance easily with the help of the elbow pull. The elbow pull is for an equine what a balance bar is for a ballet dancer. 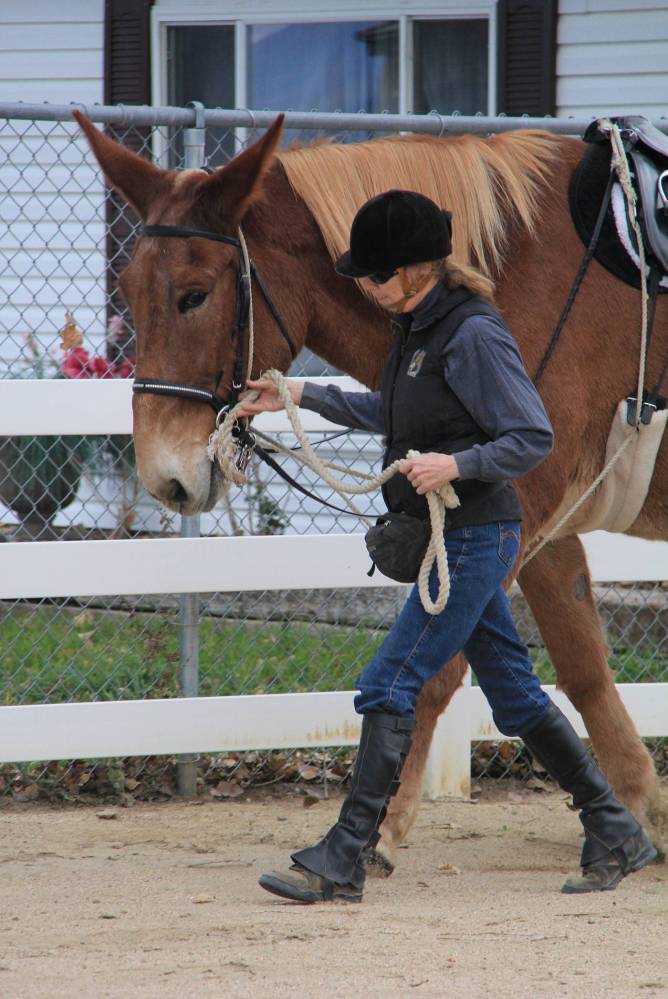 At first, Roll had to perfect and strengthen his own balance in good posture and now he will need to retrain and balance with a rider on board. Once the initial balance is corrected over a period of about two years with the elbow pull, it will only need to be used occasionally for tune-ups. Learning to measure his steps and maintain good rhythm and cadence on the lead line will help Roll when he finally does have a rider on board. 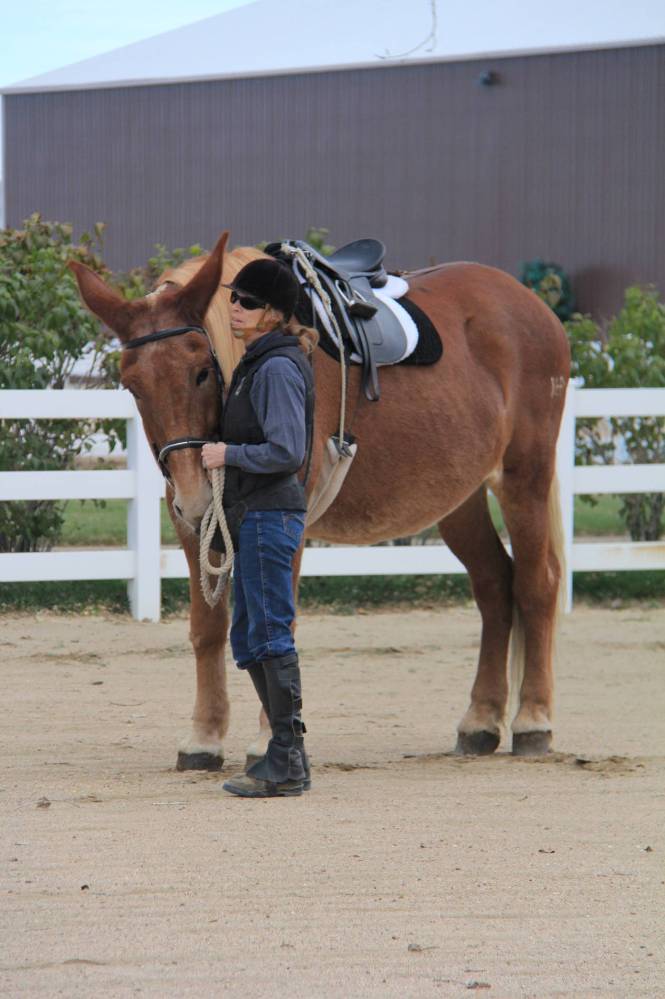 All the work Roll has done for the past two years is finally paying off. Though Roll has substantial side bones and ring bone in all four feet, it is a wonder he stays sound. The reason for his soundness is that his good posture is keeping his joints in line and the ligaments and musculature around them solid and supportive. His gaits are regular and his halts square. 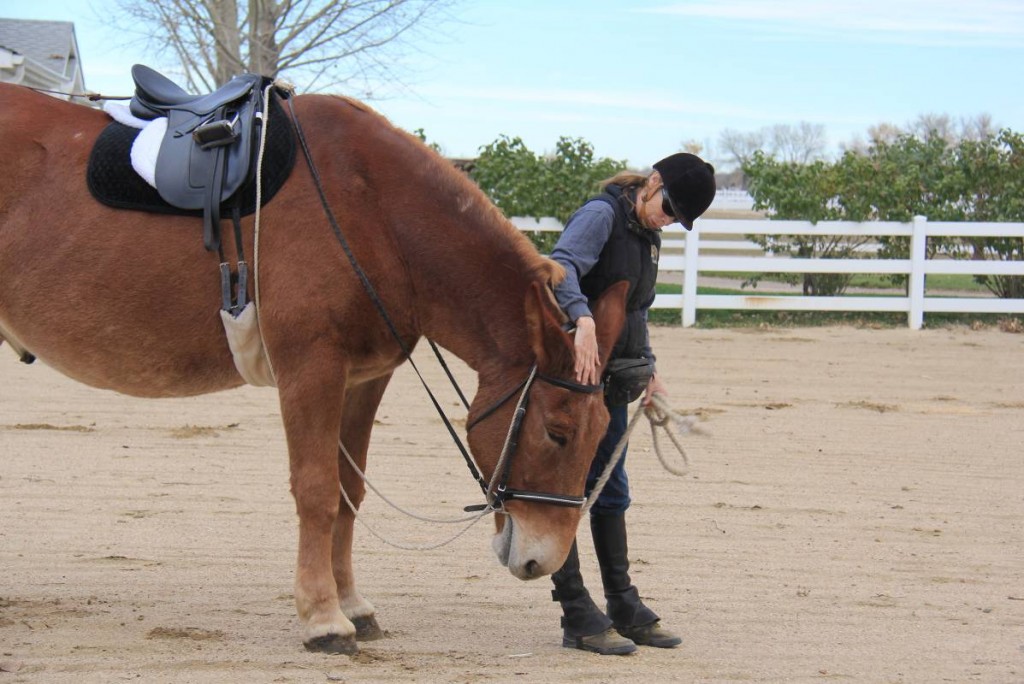 Roll’s attitude has changed dramatically and the once spooky and twice shy Roll is now exhibiting confidence and overt affection. At twenty years old, this is quite a change to make for an equine. His face reflects a calmness and serenity he has never before experienced. He’s a very happy mule! 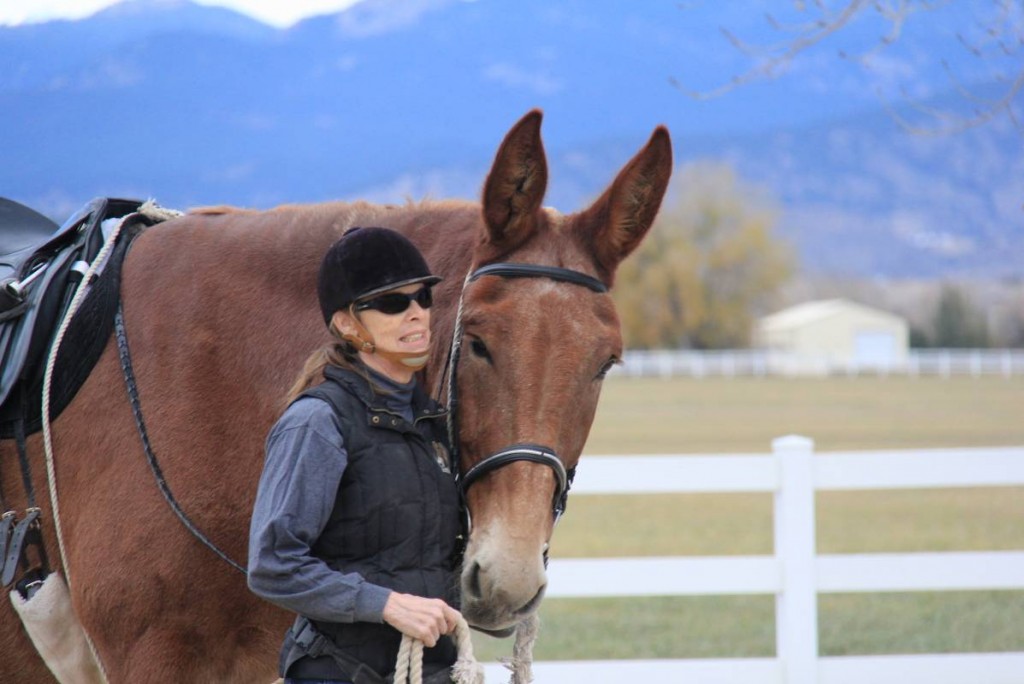 Roll stood quietly while this old gal crawled up onto his back for the first time in the open arena. Steve stood by for safety, but wasn’t really needed as the entire routine was done exactly the same way we had done in the round pen…no surprises here! 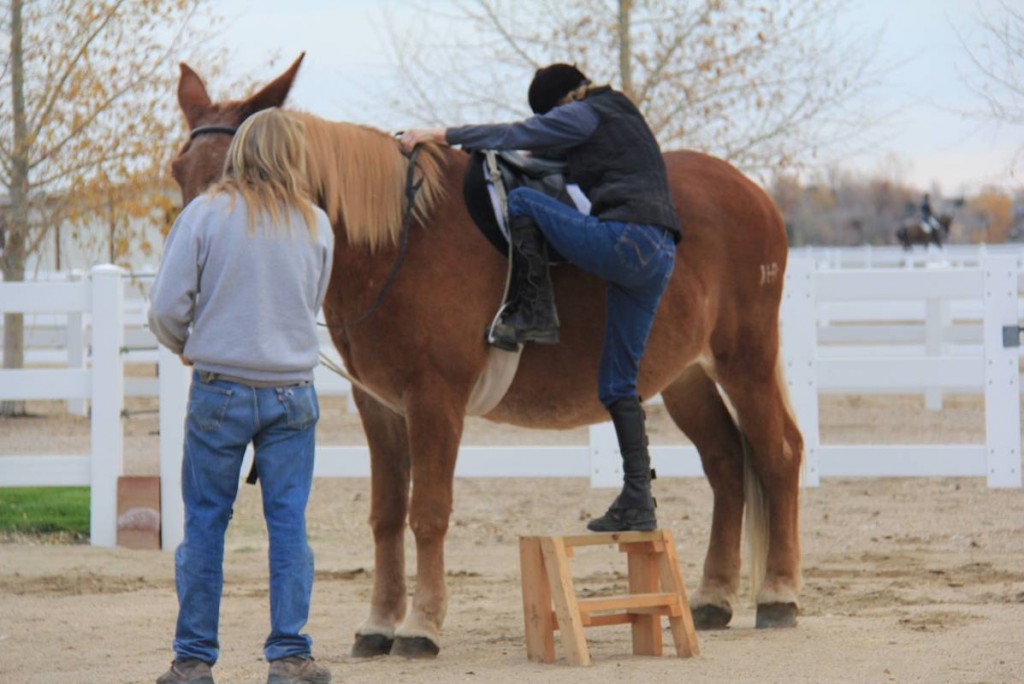 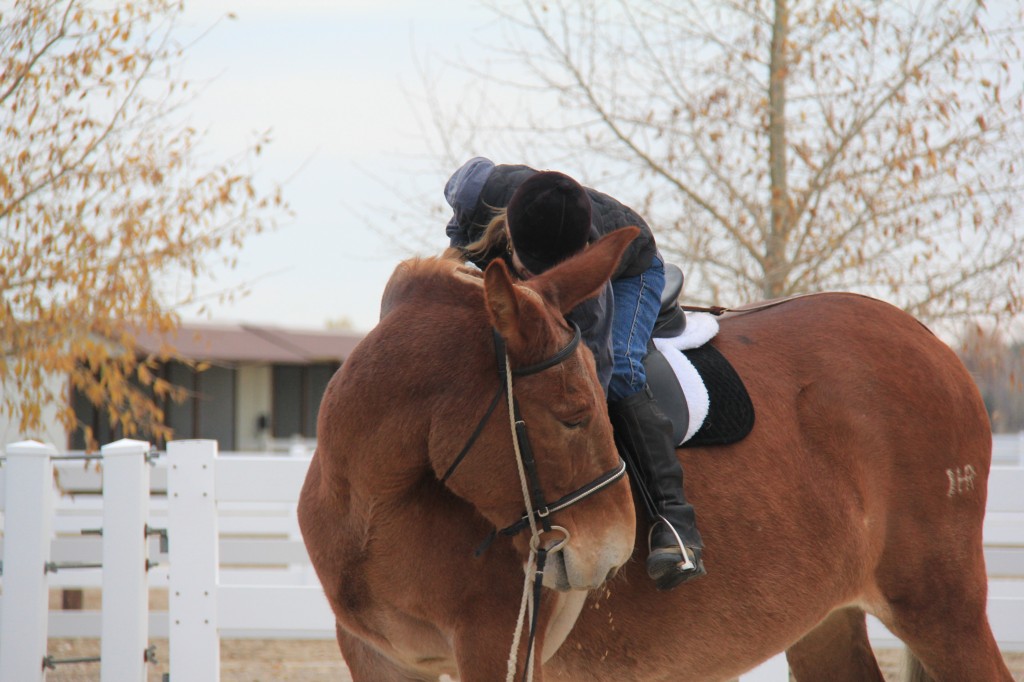 After a couple of steps backward, we were on our way through the hourglass pattern with no incidence of nervousness or negativity at all. He was more than happy to comply! 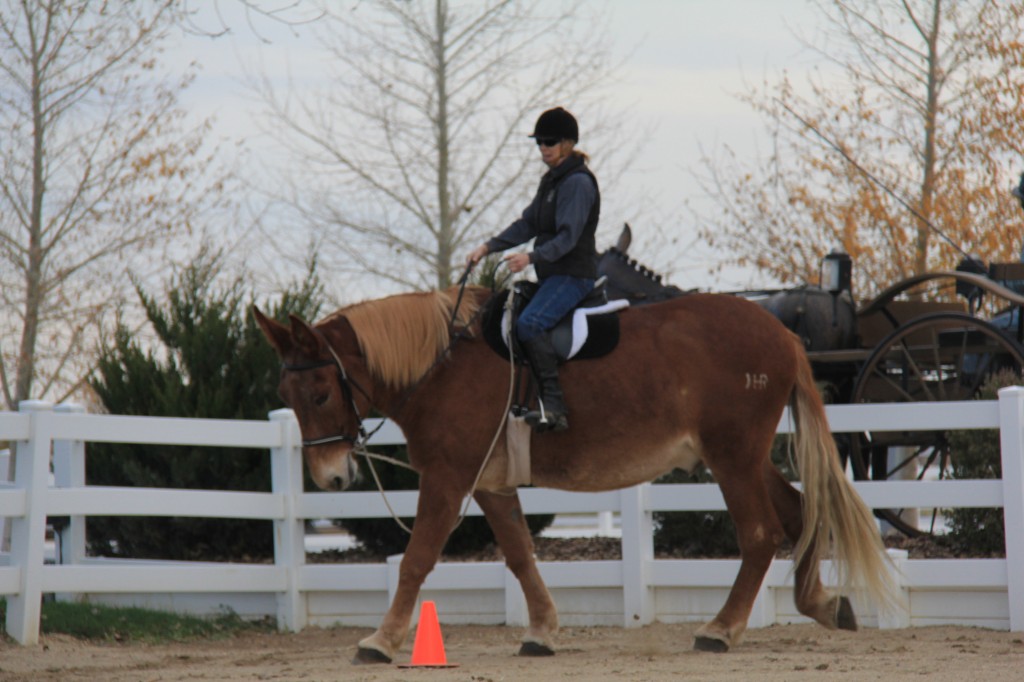 Roll was so comfortable in his new-found posture that he never missed a step and the elbow pull stayed loose throughout the pattern. 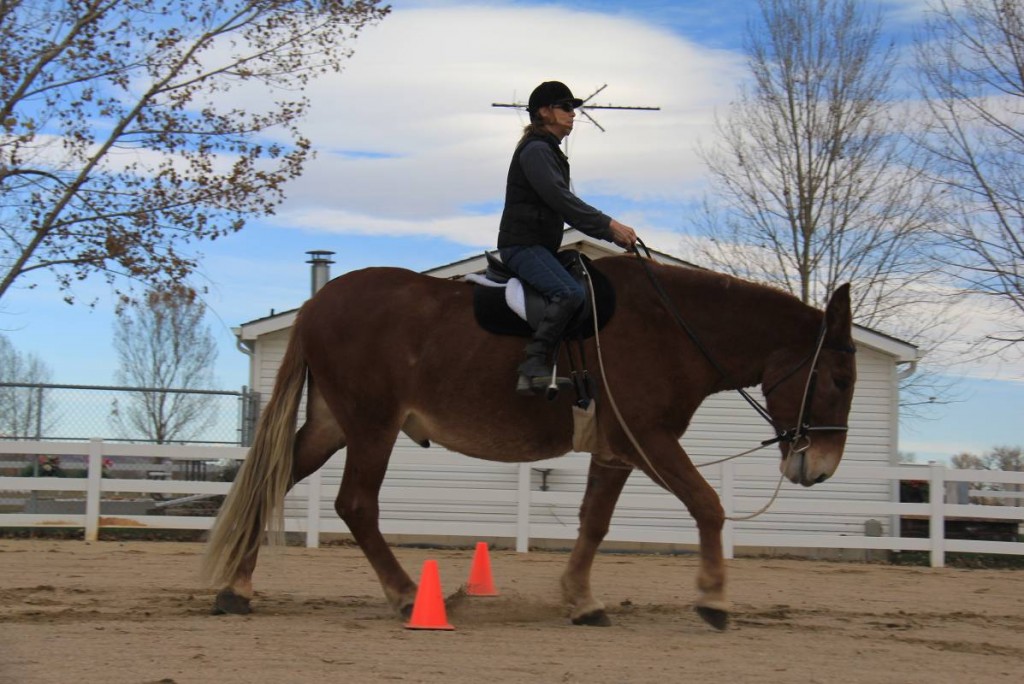 By the time we had reversed the pattern, his balance had shifted upwards and he was actively engaging his hindquarters and raised his shoulders with no trouble at all. 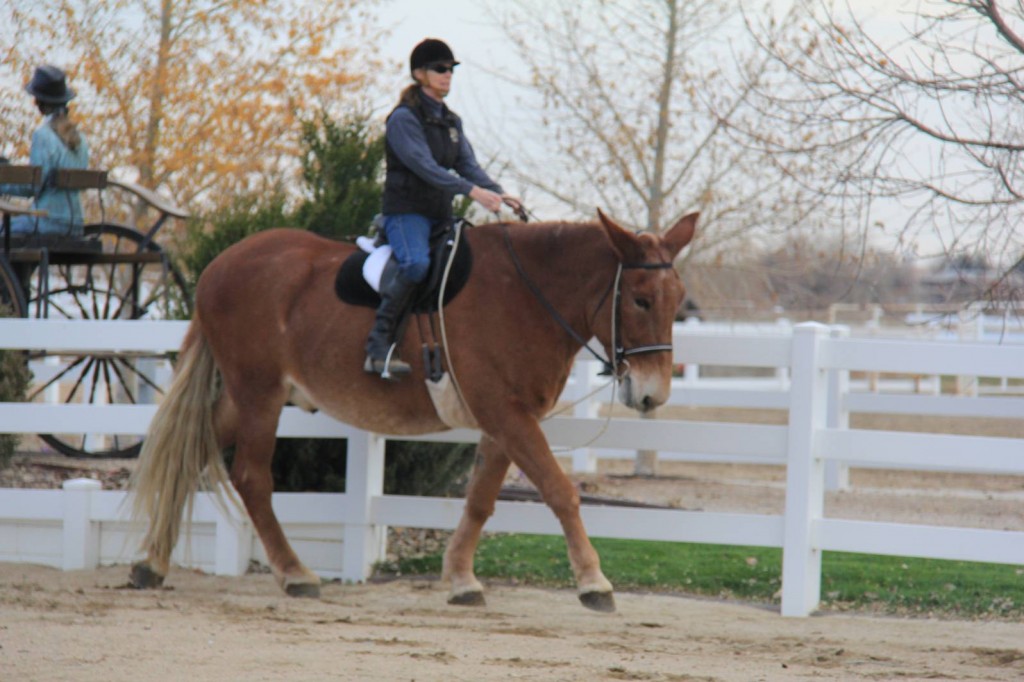 His halt was perfectly square and relaxed. 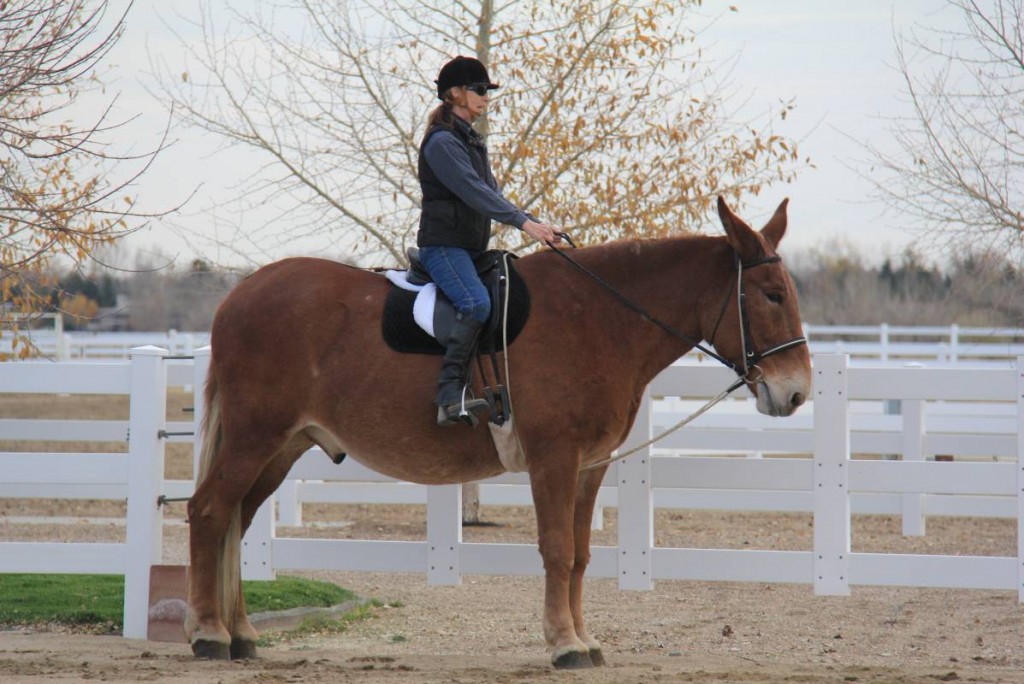 And his reinback was straight and true. 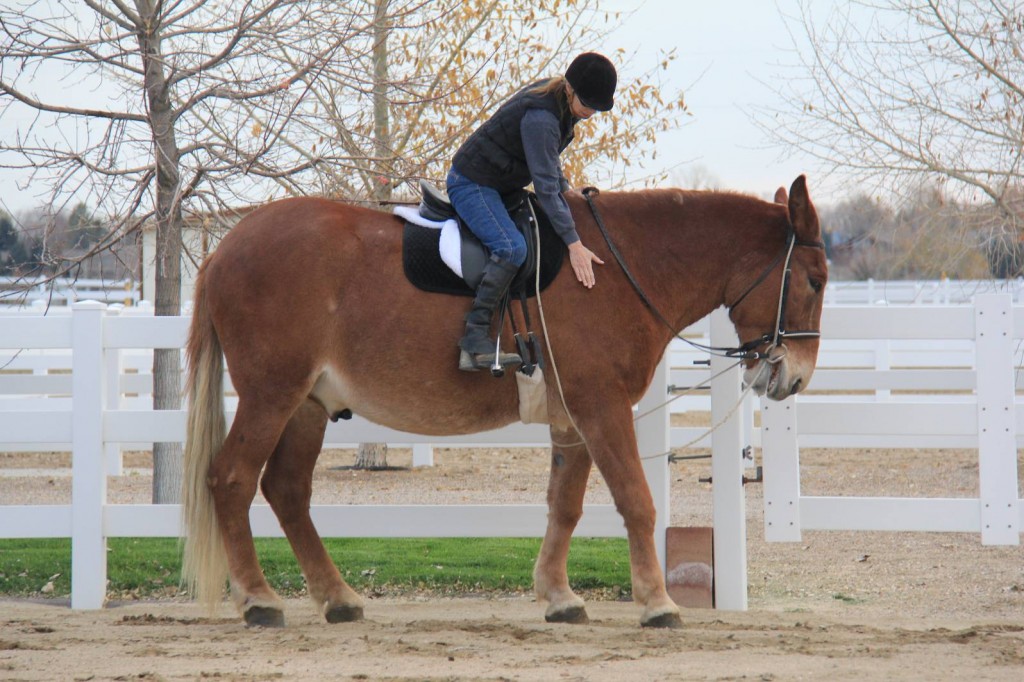 A handful of oats was my show of appreciation for a job well done before dismounting. 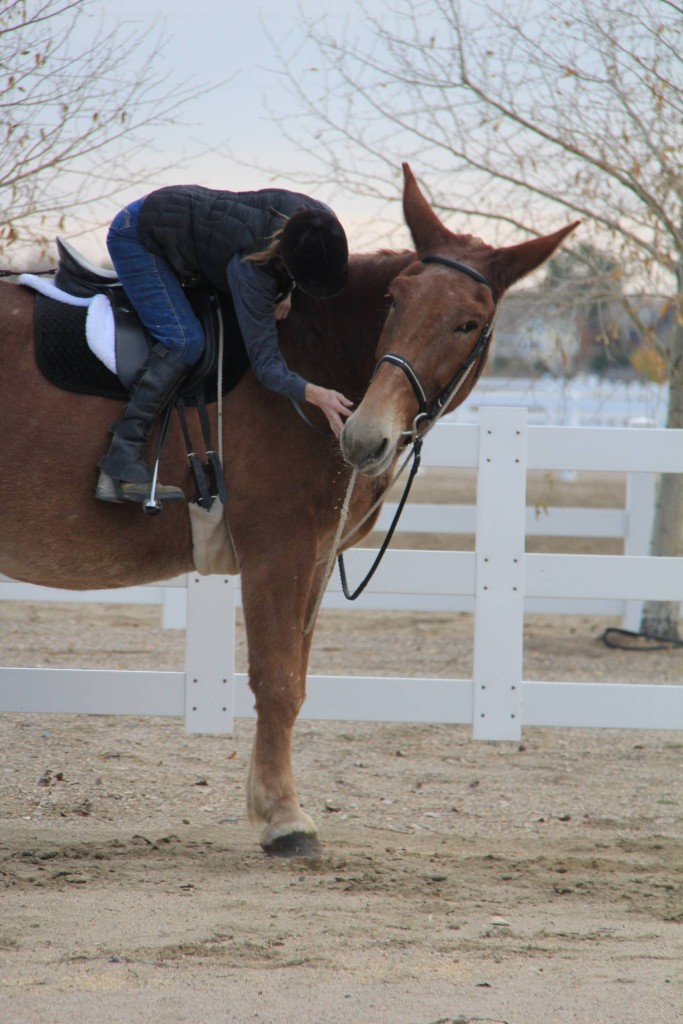 Roll stood patiently waiting for my somewhat awkward dismount…it was a LONG WAY down! The routine and repetition during all of his lessons made it easy and comfortable for him to comply. 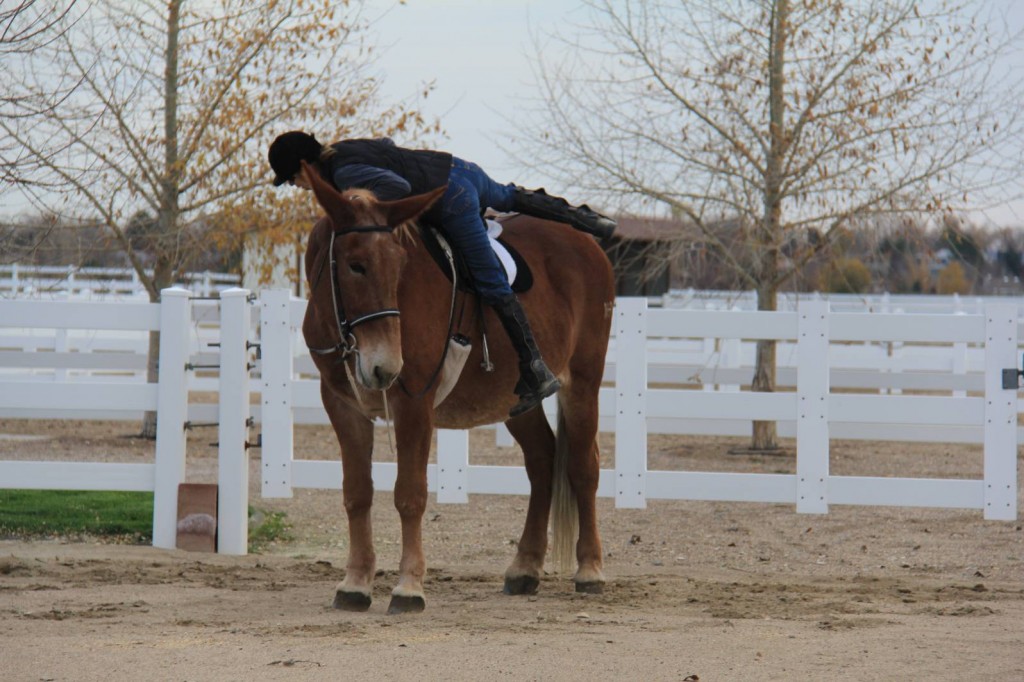 By the time I put him away, Roll was already looking forward to the next time!!!! 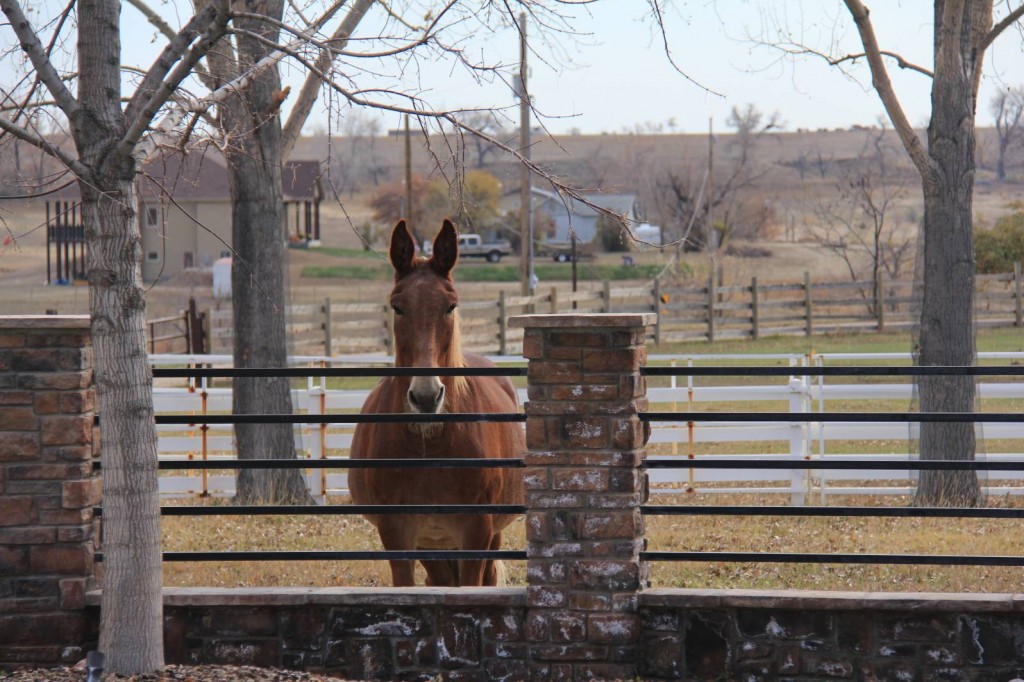