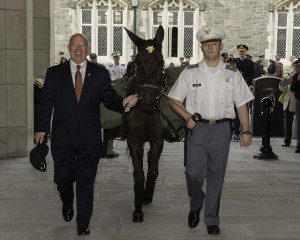 “General Caslen, on behalf of all Army Rangers and the Class of 1975 and the West Point Society of South Carolina, we present you with Paladin!” said Steve Townes ’75, CEO and Founder of Ranger Aerospace LCC, who has been West Point’s “mule donor in perpetuity” for well over a decade. ( Since 2001. )

Four-year-old Paladin, whose name refers to 1 of the 12 legendary peers or knightly champions in Charlemagne’s court, began his West Point experience on March 31, 2016, reporting to Ranger III, now gray in his muzzle.

In a ceremony to welcome the Army team’s newest mule, Director of Cadet Activities COL Tom Hansbarger ’92 officially signed in Paladin, who had two green duffel bags tied on his back. Several notable guests were on hand to witness the event, including VA Secretary Bob McDonald, another member of the Class of 1975, and LTC Anne Hessinger, an Army veterinarian who served at West Point from 2003 to 2006 and is now an equine officer at Fort Bragg, NC. 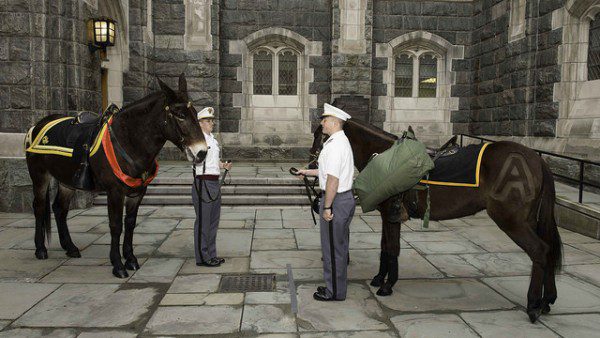 Paladin, small in stature, posed calmly for a round of photos after reporting to Ranger III, the mule in the red sash, before being led across the street to the barber while onlookers cheered him on with a rousing “Beat Navy!” chant. Paladin showed his spunk though when he kicked out his left hind leg toward the barber who was trying to get close tom him in order to shave a big “A” into his hind quarters. “He’s just nervous, just like every other plebe on their R-Day,” remarked an officer in the crowd who was watching the event. 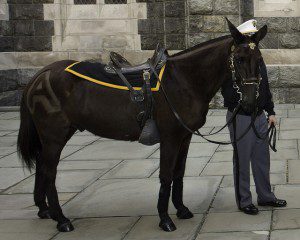 At the conclusion of the event, Ranger III and Paladin were loaded into horse trailers for a trip to Morgan Farm, where Paladin will spend his summer at his quarters. He will be officially introduced to the West Point Community and Army football fans on September 10 when Army West Point hosts Rice. The mule mascots will lead the team onto the field, carrying flags and interacting with fans.

Paladin, whose name was selected by the Corps of Cadets and approved by the Superintendent, is the third mule donated by Townes, a former mule rider and former Army officer with the 75th Ranger Regiment who has set up an endowment ensuring the Academy’s future mascots. Ranger III and his brother Stryker, Townes’s last donations, both reported for mascot duty at West Point in 2011.