We got the team together again today with Roll to assess what we were going to do going forward. The hoof wall did what we hoped it would for eight days and stayed intact with daily cleaning and new wraps, but it was now beginning to get stress marks at the heel. We knew that without adequate circulation to the area, it would no doubt begin to deteriorate. This bought us some time, however to brainstorm for a solution to the support problem going forward. 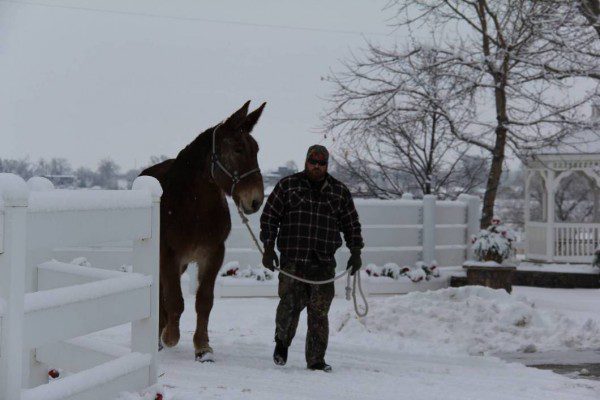 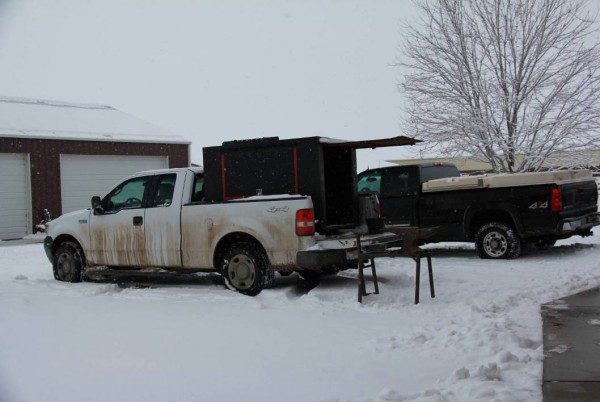 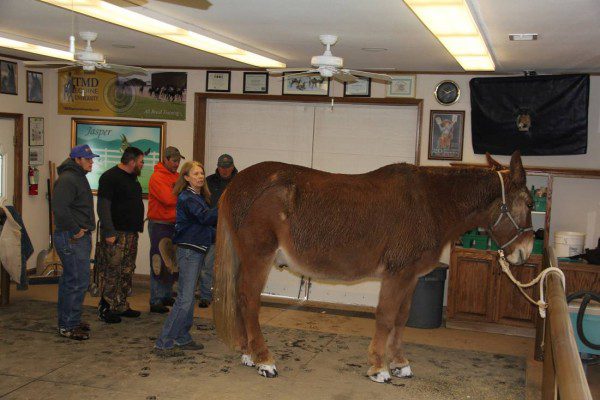 How we did this was an important consideration. The nippers could cause torque that might result in cracking. We discussed whether or not to use nippers only or a dremel, or both. 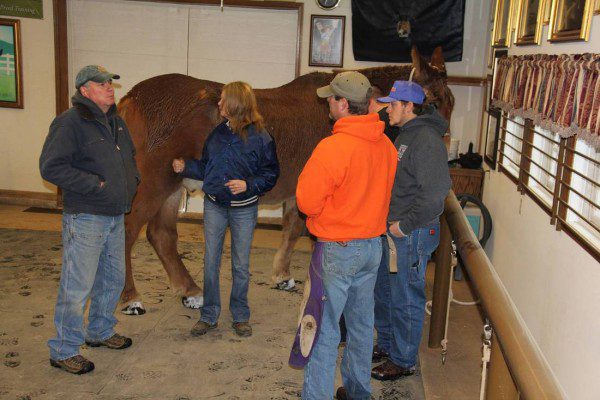 We discussed what kind of support would be needed from the shoe and we were concerned about the limitation for nailing the shoe onto the hoof since he does not have much foot left to nail to. 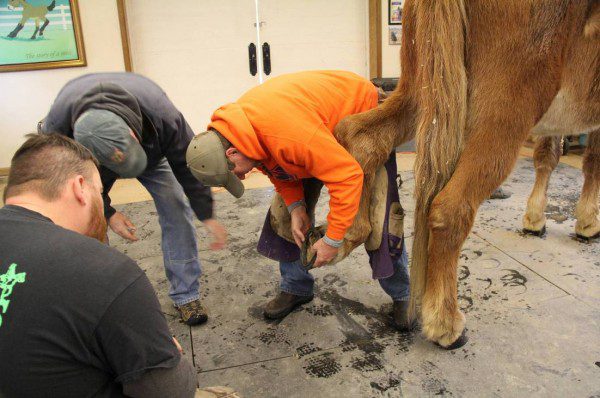 We finally decided to use both the nippers and the dremel. Dean first nipped away at the hoof wall in very small increments with both the straight nippers and then in the smaller areas with a rounded narrower nipper. 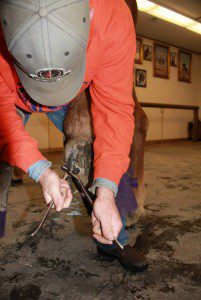 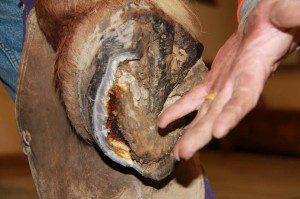 When he got all that he thought he could safely done with the nippers, we then went after the edge with the dremel to create a smoother line that would inhibit cracking. 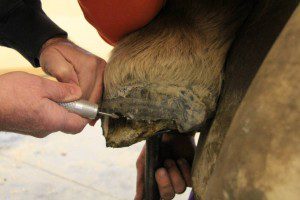 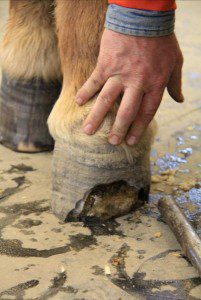 Then Chad cut down the custom made the shoe to fit what was left of his foot. We opted not to go completely around the toe, leaving it and the left side open and covered the hoof across the heel instead. 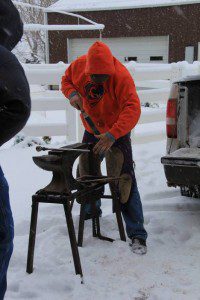 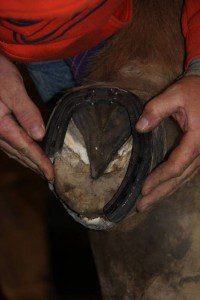 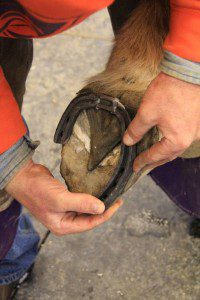 Dean put a bead of borium on the shoe at the toe of his opposite foot for traction and it was useful the minute we took him out of the Tack Barn and onto the snow leading to his pen. As he stepped onto the slick snowy surface outside, the good foot did slip, but he was able to catch himself with the Borium bead. 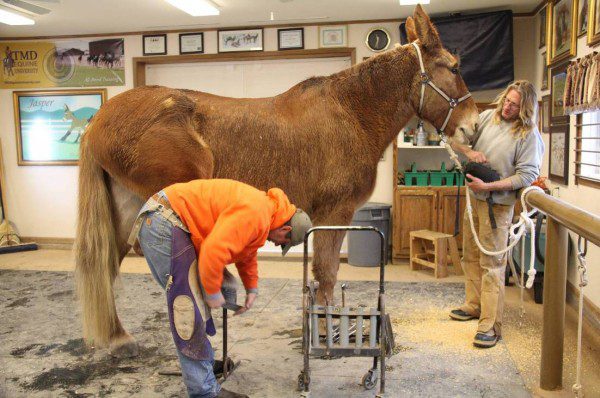 We talked about doing a test to see what kind of circulation he had in the foot and decided it wasn’t really feasible to do it. Roll has side bones and ring bone in the foot and that alone would produce irregular circulation patterns in the foot. Therefore, the test really wouldn’t reveal anything that would be helpful at this point. We opted not to do it. 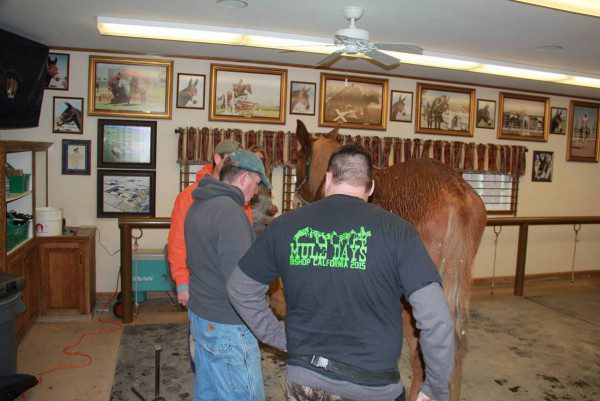 We also talked about doing an ultrasound on the connective tissue to make sure we had cleaned out all the fungus, but again, it really wouldn’t tell us anything that we didn’t already suspect to be true. The main concern was if there was any more fungus left in the foot, but after resecting the hoof wall and cleaning the affected area, we could see with our own eyes with the help of the x-rays that there was nothing left to ultrasound. 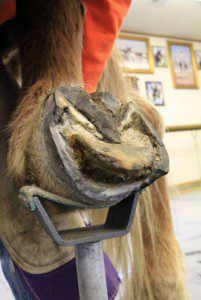 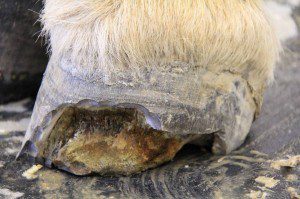 We put Roll’s foot onto the hoof stand, checked it once more and then Dean set the ¾ custom-made bar shoe with minimal nails that he and Chad had made. 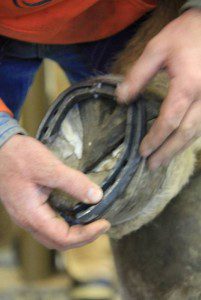 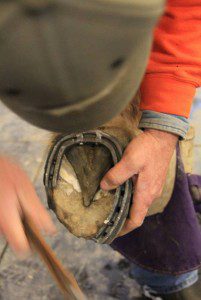 He then taped cardboard over the affected area with gorilla tape to keep the glue away from it. Once that was in place, he then applied an extra-hardening glue to the bottom of the foot to hold the pad in place. This would lend more support to the hoof and allow it to do its job more closely to normal giving the sole and frog a more even surface of pressure. 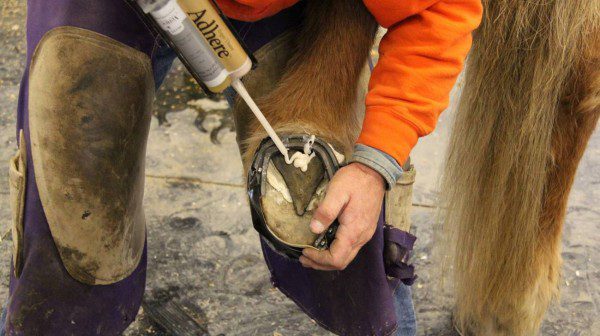 Once the glue was in place, he put on a tough blue pad to provide some support to the sole and to help hold the shoe in place. Our veterinarian, Greg Farrand suggested that we brush out any dirt and debris that adhered to the foot every other day as the pad and cardboard were compromised. Then we would just cut new cardboard and wrap the tape back around the affected area to keep most of the debris out of the affected area. 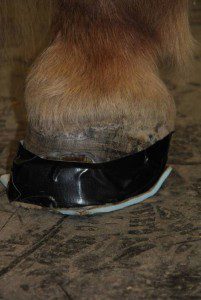 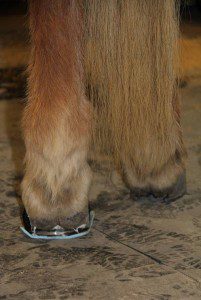 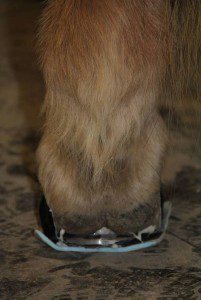 We had to use both minimal nails and glue together to keep the shoe in place and we will try to go 7 weeks before re-shoeing if possible. Our local farrier supply house, “Oleo Acres” recommended using the supplement Hoof Power made by Delta Mustad Hoofcare Center in Forest Lake, Minnesota to help accelerate hoof growth. We opted to use Providone-Iodine to clean the affected area every other day as Greg said the concentrated “White Lightning” was better to use at the onset and for a shorter period of time. As we go forward, we will be sure to continue to share our experience with all of you. Please continue to keep Roll in your prayers.