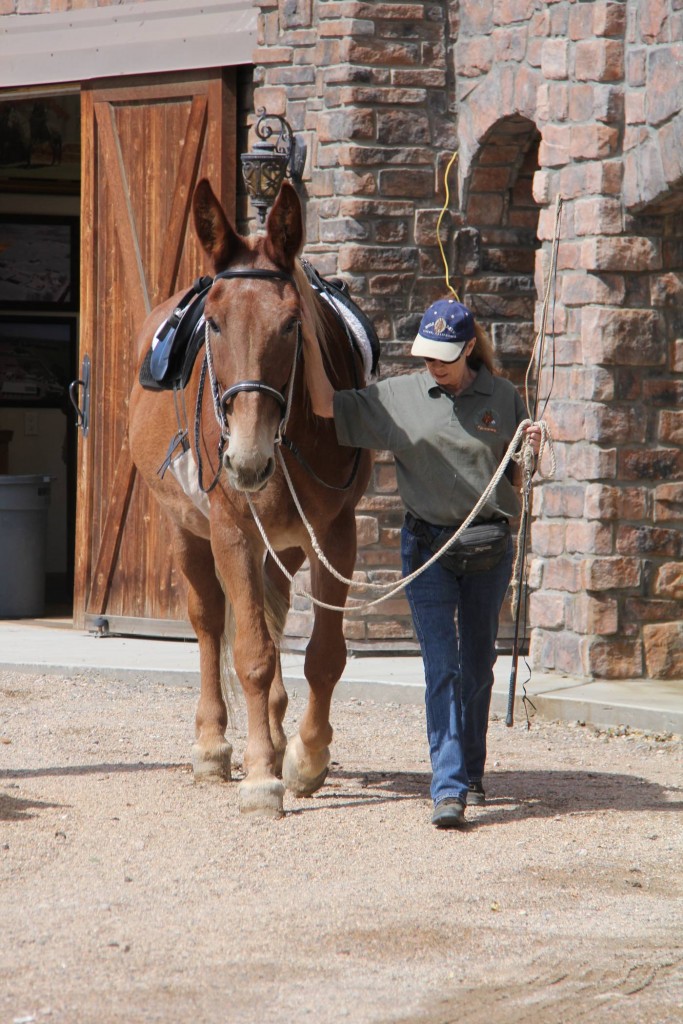 Roll continues to be a happy camper and always looks forward to any time he can spend with us outside of his pen and pasture areas. It has been several months since he has been worked because we have been busy with construction all summer, however, the core muscle, good posture training that he had for the past three years has drastically changed his overall health. 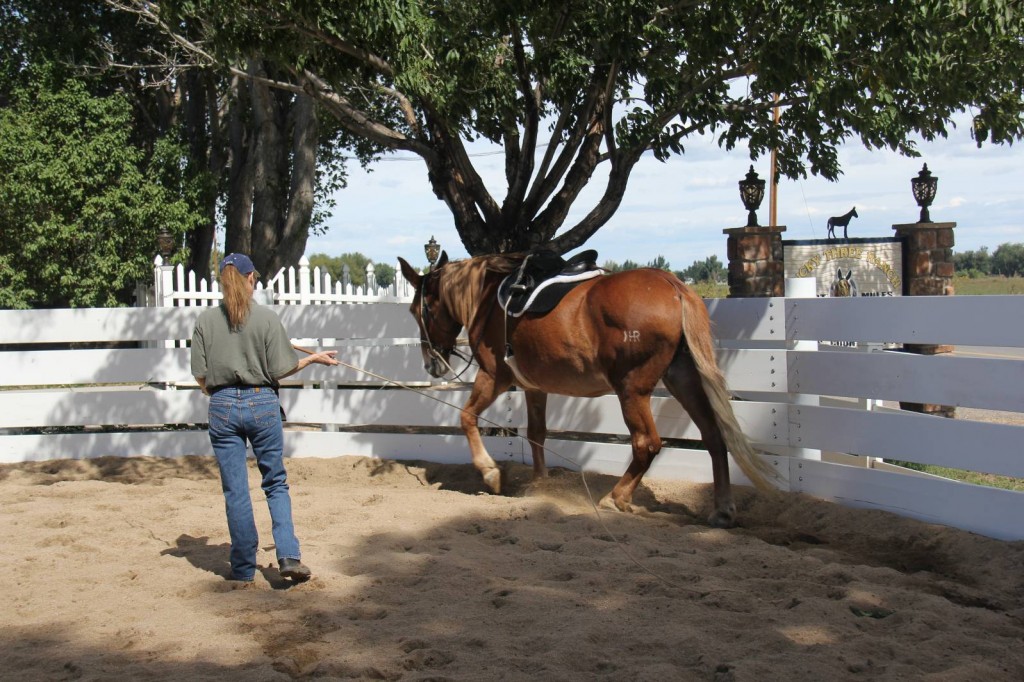 Because it has been so long in between workouts, I began his workout by walking him around the round pen five rotations before asking for trot. As he walked I made note of the way he was moving through his body. He was a little weak in strength, but still maintained a good rhythm and cadence to the walk with his feet landing only slightly behind his front footsteps. This was to be expected. 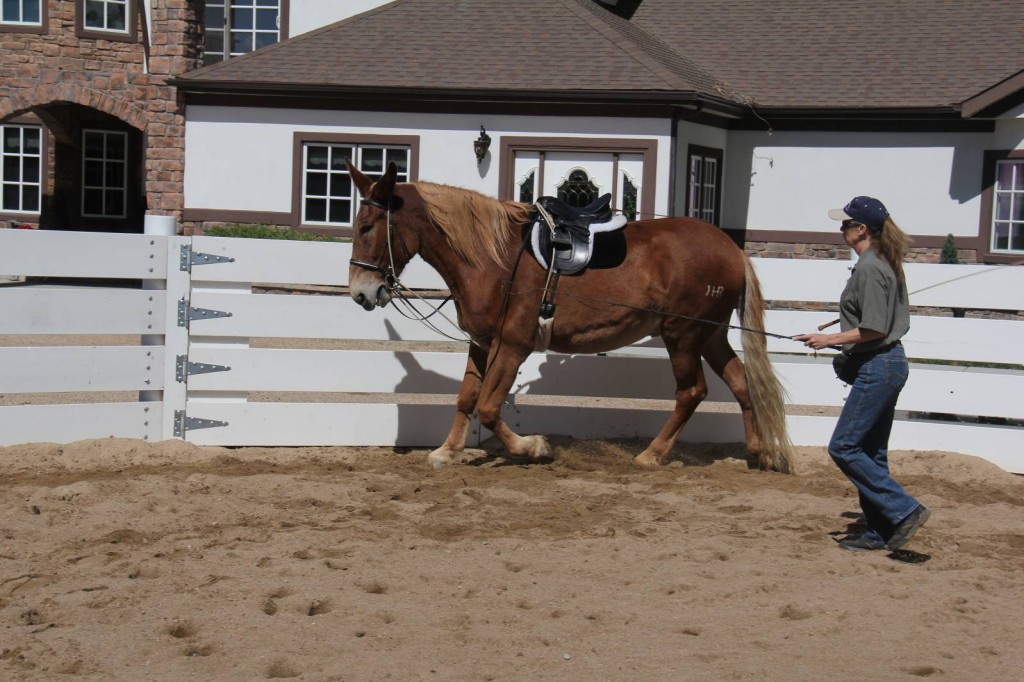 When he was asked to trot, he responded promptly and energetically and showed no signs of lameness even though he is still dealing with side bones on both sides of all four feet and ring bone, top and bottom in his hooves. It’s very encouraging at the age of twenty that he is sustaining good balance throughout his body such that he is not putting undue stress on those areas. 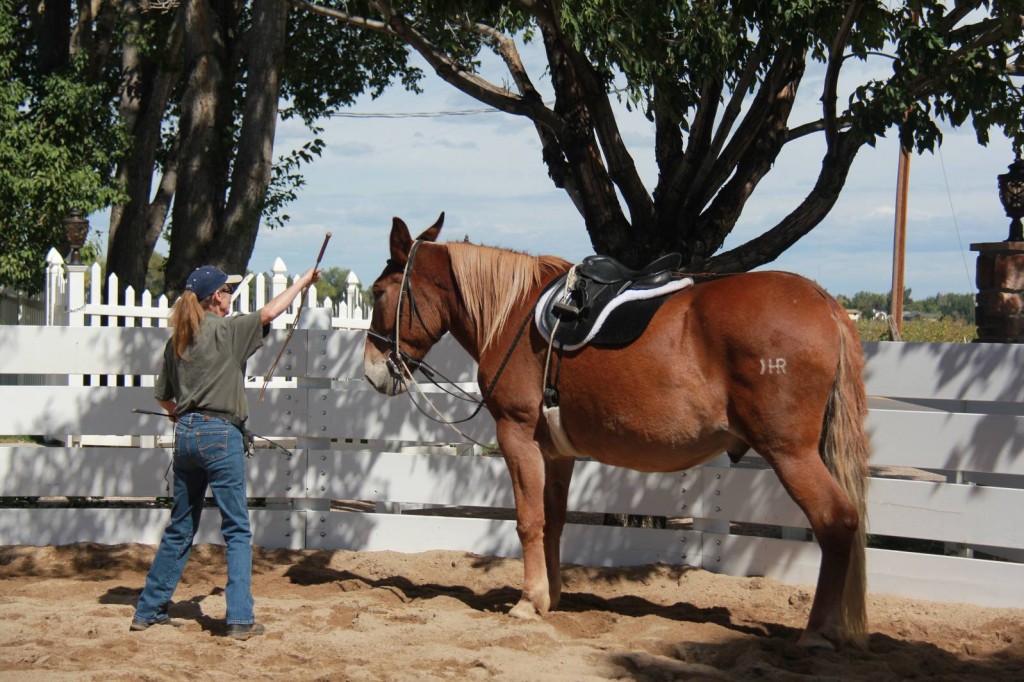 I was particularly surprised at how good his posture and balance was after so long with no work when he came to an almost perfect halt when asked to whoa. 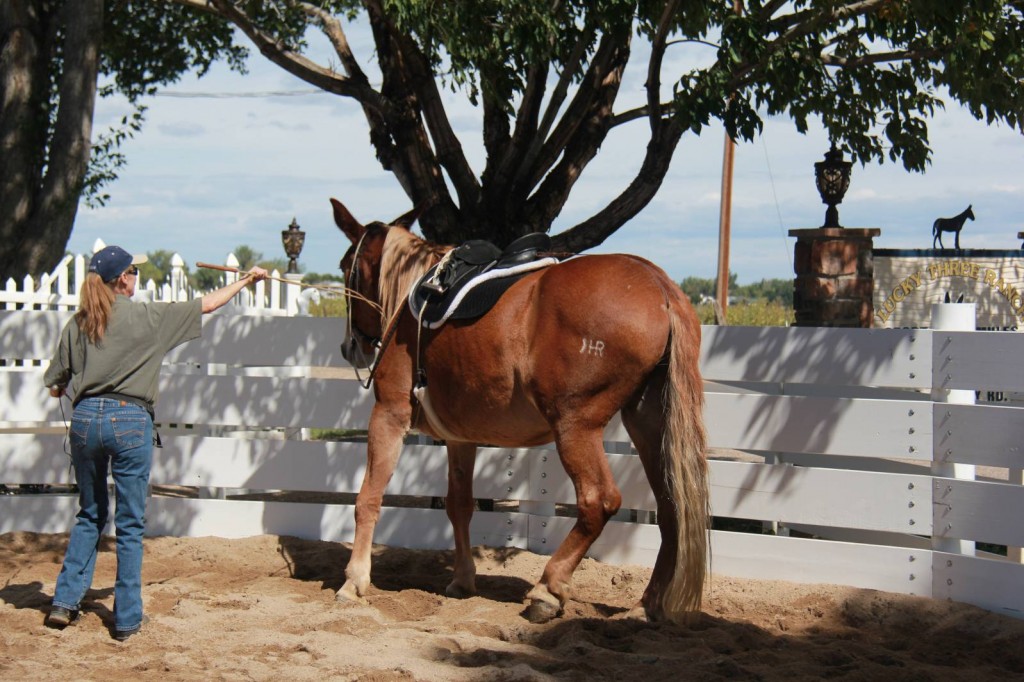 When asked to reverse, he executed it with the finesse he had previously learned to do by first planting the pivot foot and then making a smooth turn against the fence and crossing the front legs over correctly. 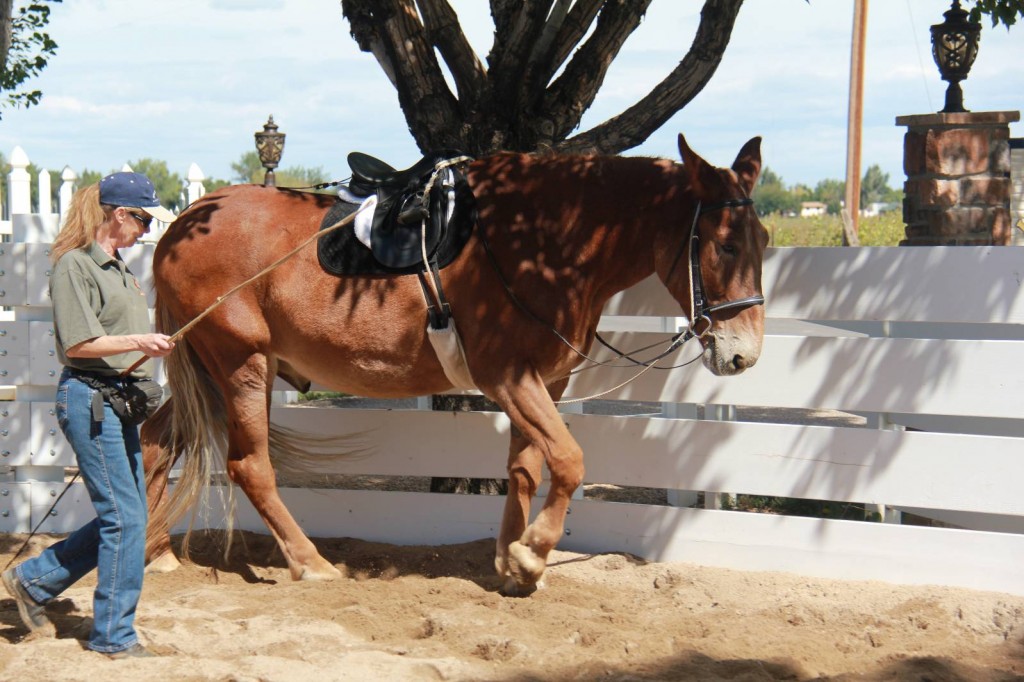 He then walked in the opposite direction with regularity of cadence and rhythm and complete willingness to perform, though I could tell he was beginning to tire in the sandy ground. 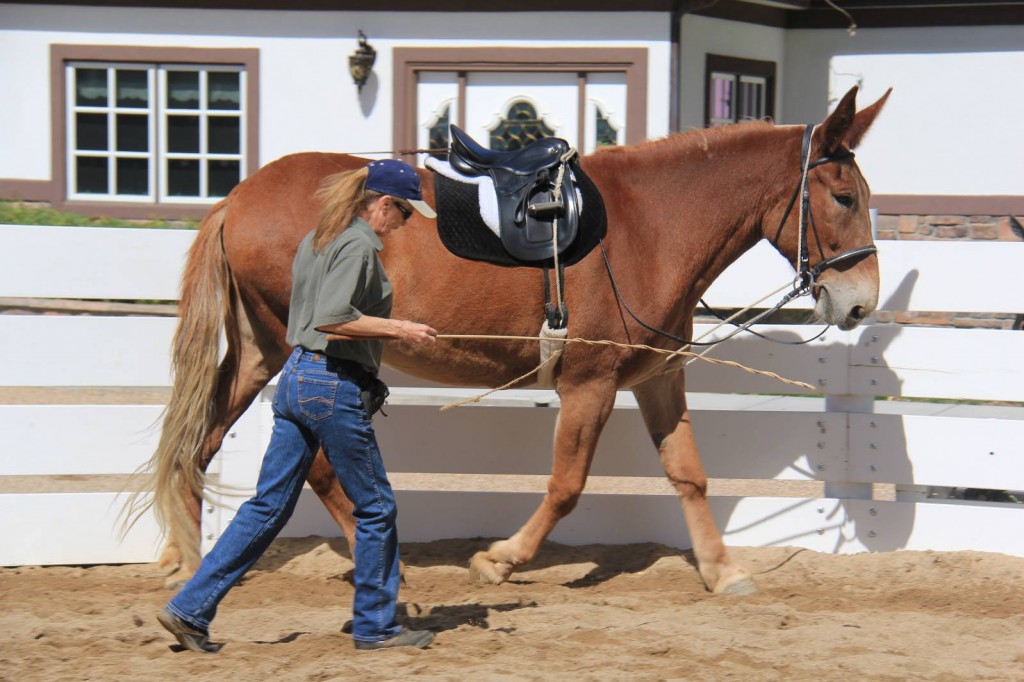 When asked to trot, he responded promptly with good energy, but had to lean on the elbow pull a bit just as a ballet dancer would need to lean on a balance bar for exercises after being away from dancing for a while. 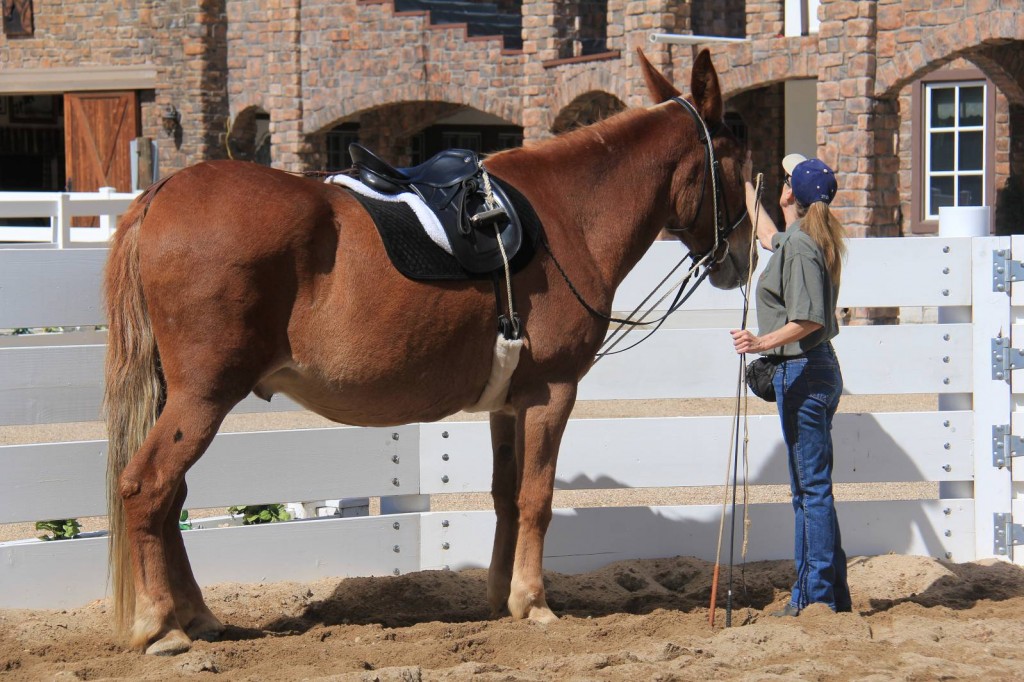 When asked to halt, again it was smooth, balanced and nearly perfect. 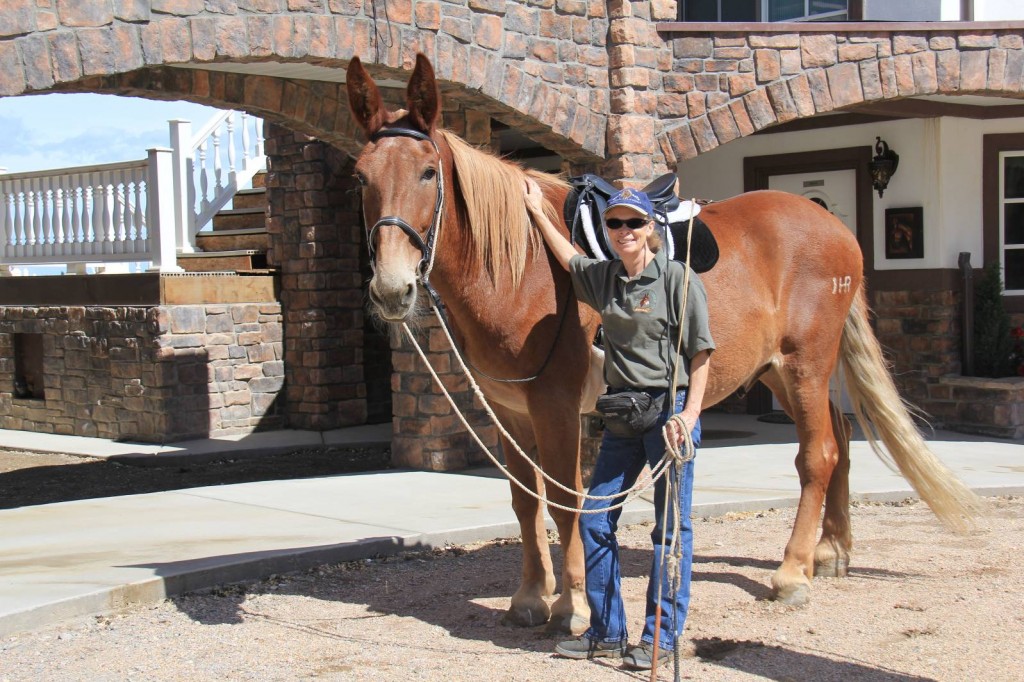 Roll was so proud of himself that I thought we should stop in front of the new construction for a photo op! 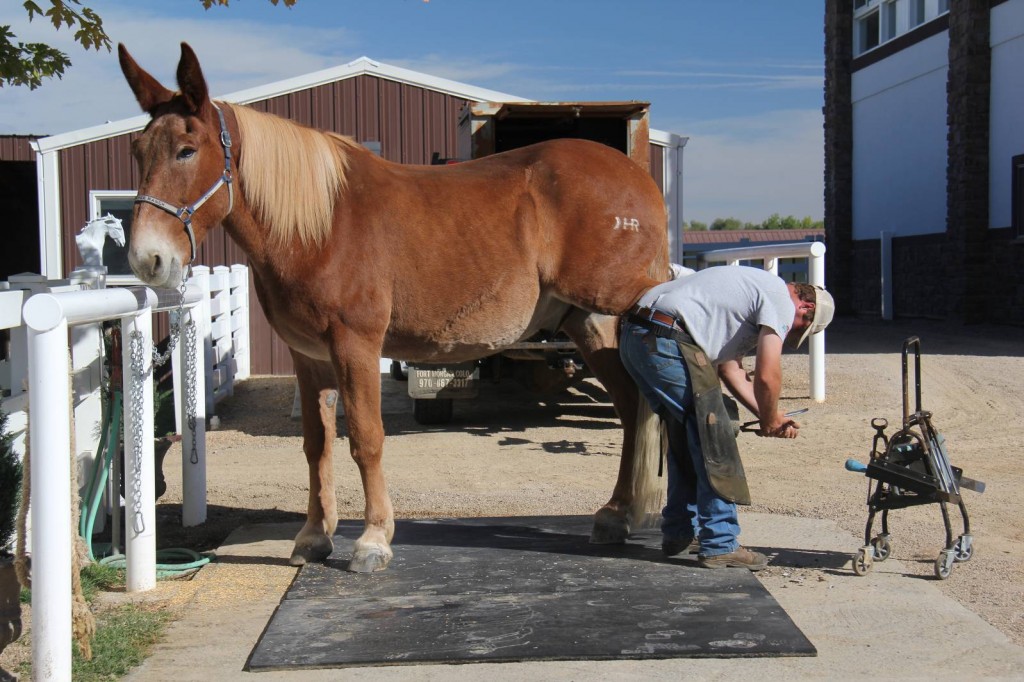 Dean the Shoeing Machine came by a few days later to reset Roll’s hind shoes. The shoes help him to sustain his balance and keep from wearing his toes on the hind feet. In addition, having the shoes has really helped to steady the right hind foot that used to twist when he moved. 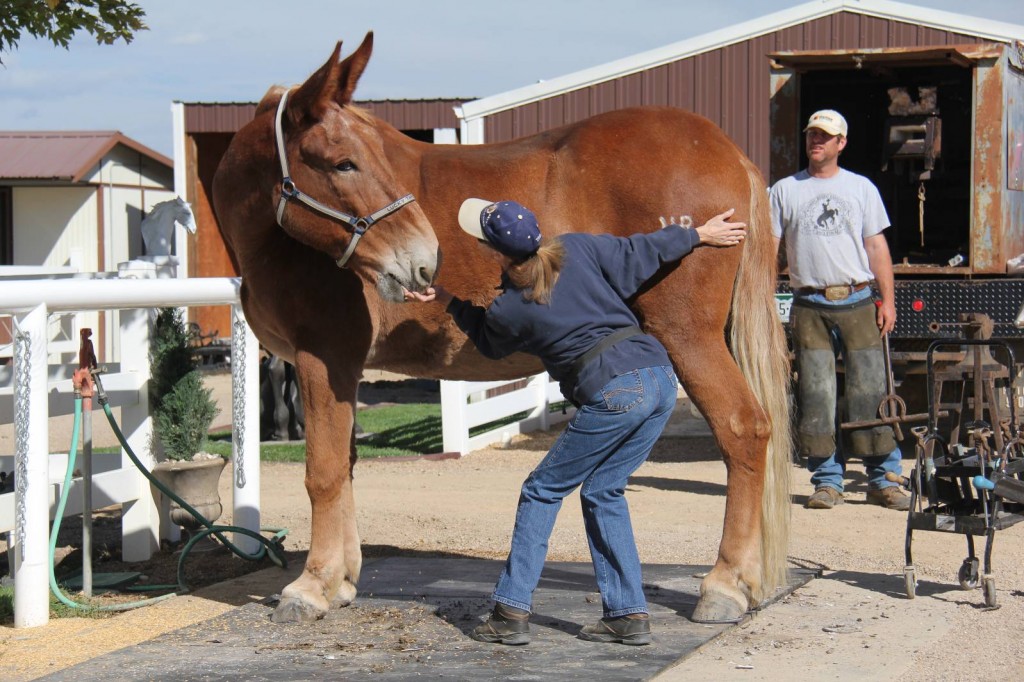 Roll’s stretches have greatly improved as well. Where he used to have to twist his head sideways to look at me, he can now reach and keep his head straight while bending through his neck and shoulders. This is a really tough move! 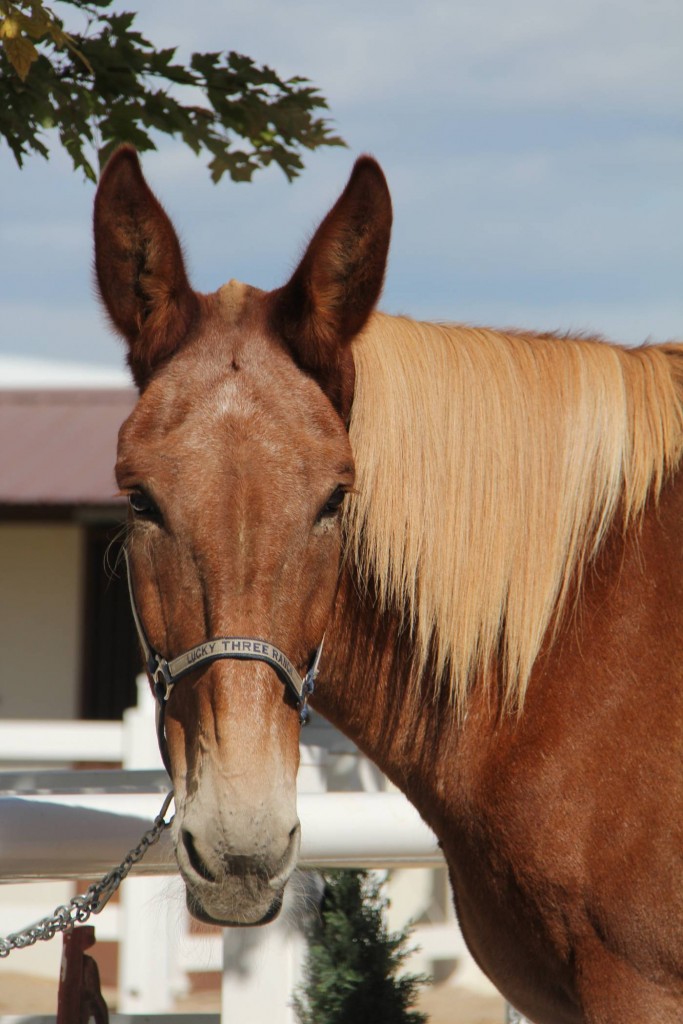 Roll’s mane continues to grow long and soft with his weekly applications of Johnson’s Baby Oil that I used to soften and train his coarse mule hair to lay over like a horse’s mane. It would otherwise just keep growing straight up and fall on both sides in a rather unruly manner. That is why so many people roach the manes on mules! Roll is a beautiful boy at twenty years old and really loves being a Lucky Three mule!