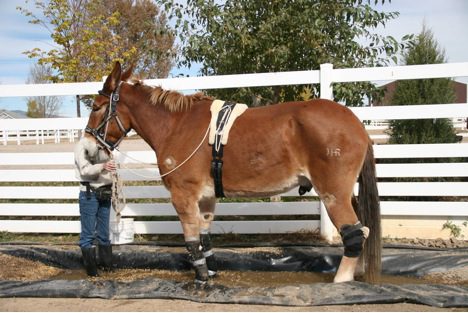 Draft mule Rock eases into a new step of his rehabilitation process.

Rock and Roll did relatively well for the better part of the summer, but as they got to feeling better, they became more rambunctious and began sparring with each other. One evening several weeks ago, Rock came in a little sore in front, but we thought nothing of it as this had been the case before. The next morning however, we went out and found Rock standing hunched over and shaking on all four legs! We immediately called the chiropractor because it was clear that he had done something to his left hind leg, which was the only sound leg left on his body. The chiropractor couldn’t make it until later that evening, but Rock did get a massage that day. It didn’t seem to help much. When the chiropractor finally arrived, he did manage to get the stifle area on the left hind somewhat straightened out, but it didn’t really fix it. The next morning he came back and suggested that we call a pow-wow with the equine chiropractor/D.V.M. from Colorado State University. We called everyone involved with Rock as well: his vet, his equine masseuse, her husband (also a D.V.M.), our ranch manager and me.

I suspect that Rock’s injury occurred because he and Roll were probably playing and got too rough with each other. Rock probably tripped himself on the temporary boots he was wearing that were fitted for a draft horse foot (round and not oblong like a mule foot). The prognosis was agreed upon that Rock’s laminitis was causing most of his discomfort and he was trying to carry all the weight on an inflamed area between and hip joint and the stifle joint. Rock wore huge sores on his fetlocks, knees and hocks that needed to be wrapped to prevent further damage. Since Rock had spent much of his time prior to coming here on rest and Bute, I did not feel this to be the best course of action for him since motion seemed to improve his condition when he first arrived.

The Bute he had been on prior to coming here had caused problems in his digestive tract. I felt it was risky to have him on Bute again so soon after the 9-day dosage we had just done. Bute can also mask any other problems that he might have. As long as he wasn’t severely painful, I decided to modify his regimen to include integrating his workout with the walk to and from the “ice ditch” my ranch manager created for him. He walked through the sandy dressage arena over his four 1” PVC poles and then we opened two gates with a circle to the right at each gate. Then his gear was loosened and he proceeded into the ice ditch for twenty minutes on his front feet and 10 minutes on his rear and fronts. He was antsy about leaving the back feet in for very long. Why? Probably because he has shoes behind and they got pretty darn cold pretty quickly and I imagine the nails holding them on weren’t at all comfortable either! Then he returned to turnout via the same course, only this time going the through the gates with turns to the left. 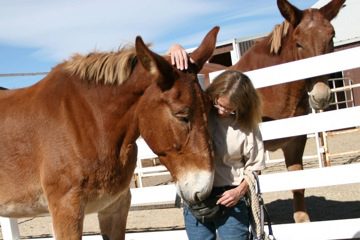 Draft mule Rock is back on the road to recovery!

The moderate exercise and icing has really helped and Rock is once more on the road to recovery. When he gets sore and doesn’t want to weight the front feet, we ice him to cool the laminitis down and it is working very well. He has ceased lying down a lot and is acting much more normal. The sores both under the wraps and on his body in areas we could not wrap are finally beginning to heal. I will need to continue wrapping these areas until we can be sure that he is strong again on 3 of his legs and moderately strong on the right hind leg with the old fracture at the pelvis. Rock and Roll had to be separated to keep Rock safe, but they still enjoy each other’s company in adjoining stalls and runs and in adjoining turnout pens. When you are tending to rescue animals it is always one step forward and several steps back, but with faith, hope and a little help from knowledgeable friends and professionals, miracles can happen! You just have to BELIEVE!