To the untrained eye, “Caramelo’s” performance might seem quite amazing! However, to those of us who know the elements of dressage training, it is evident that this jack is not doing all these amazing movements correctly. The saddle has not been placed properly over his center of balance, so the rider is putting undue stress on his front quarters. This is why you can see over-development in the neck and shoulders while the hindquarters show some comparative weakness. The rider’s position is actually prohibiting correct engagement from the hindquarters.

It is evident that Caramelo’s temperament is outstanding to be able to attempt all these moves and perform them for his handler obediently though incorrect. Because the movements are not originating from the hindquarters and ample time has not been initially taken to develop good forward impulsion with regard to rhythm, regularity and cadence, the joints and muscles in his body are being compromised and will show wear and tear as he ages. Through the movements, he is exhibiting obedience, but is very tense throughout his body.

In the Spanish Walk, Caramelo’s hind legs are coming in a split second behind the front legs and he is thus, not able to push the front legs into the uphill balance that would be a more impressive display. His body carriage is on the forehand at all three gaits and his lateral work is wobbly. Caramelo is obviously moving away from the whip in the Spanish Walk and when asked by the handler from the ground to pick up the hind feet, the handler is tapping the hind feet backwards instead of forward. The jumps he did were not initiated from the hindquarters and were therefore more of an uncontrolled launch over what should have been an easy and graceful jump. There are many more things wrong with this performance that tell me that this handler does not understand how much time and effort it takes to cultivate a strong body in good balance and posture for the movements that are being asked of him. 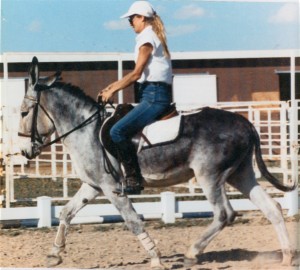 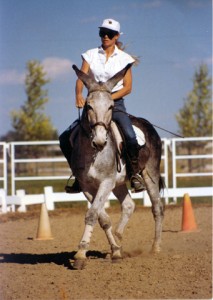 With proper dressage training, it took two years just to establish a good working trot with our own Little Jack Horner when he was in his prime. After establishing good forward impulsion, regularity, rhythm and cadence at all three gaits, two more years of practice insured that his lengthenings and lateral movements were done in an uphill balance with his hindquarters fully engaged.

When little Jack Horner was retired at twenty years old, he was beginning to “offer” the more complicated movements of half pass and pirouettes. He became the only formal jumping donkey to clear four feet in exhibition while jumping with the alacrity and grace of a hunter. Had I opted to continue with him, it would have taken several more years to develop these kinds of movements and many more years to go beyond to piaffe and passage as I did with Lucky Three Sundowner, Little Jack Horner’s mule half brother.

Though impressive at first sight to the untrained eye, I am making this post to warn people of the dramatic effects that incorrect and hurried training can have on the equine’s body. Be patient, take your time to do things correctly and the joy you will experience will genuinely include the health and longevity of your equine companion! Today, Little Jack Horner maintains good health with no physical problems. He and I still enjoy each other’s company at his ripe old age of 33!