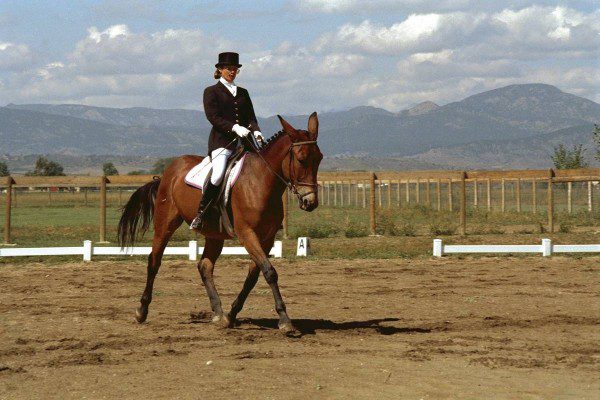 Foaled June 2, 1980, Lucky Three Sundowner was the last mule born at my mother’s Windy Valley Ranch and at two weeks old, the first mule to become part of my own Lucky Three Ranch. He showed successfully at Halter, English and Western Pleasure, and became the 1984 World Champion Reining Mule at Bishop Mule Days. However, his greatest accomplishment was to make it to Fourth Level Dressage after introducing Dressage to our Bishop Mule Days show, and after winning the World Championship at Third Level Dressage in Bishop in 1992 and 1993. (They did not offer Fourth Level.) He never really liked the Full Bridle and did all this in a Snaffle Bridle. Mules were not allowed to compete in the A.H.S.A.-sanctioned shows with horses during that time, so we were limited to schooling shows with horses to measure our progress. However, with his help, and with the help of other Dressage enthusiasts like Carole Sweet and Audrey Goldsmith, we laid a foundation with goals that were finally realized eighteen years later when mules were finally officially accepted into the Dressage Division of the United States Equestrian Federation. To date, “Sunny” is the only mule in history (that I am aware of) to be schooled at Fourth Level Dressage. He was working on Piaffe, Passage and Flying Lead Changes every two strides when he was retired at twenty-three years old…truly a remarkable friend and ambassador for his breed! This week, he finally crossed over the “Rainbow Bridge” due to a tumor that eventually prevented his ability to chew. He will be profoundly missed!