The following is an article from West Hawaii Today. 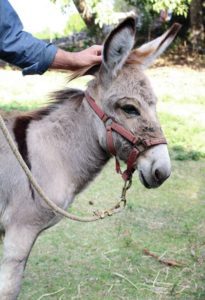 KEALAKEKUA — Loneliness isn’t just a human phenomenon. Its existence has been well documented throughout the animal kingdom, from elephants to primates to canines.

It’s even prevalent with donkeys, the beasts of burden that served a fundamental function in the development of the coffee industry on Hawaii Island.

Just this week, perhaps the island’s most famous donkey — Charlie, the 30-year-old pack animal who has spent the better part of the last 15 years as a staple of the Kona Coffee Living History Farm — finally found himself a friend to share the load.

The Kona Historical Society, which operates the farm, announced Tuesday that its crowd funding campaign, “Charlie Needs a Bestie,” had resulted in the donation of a 6-month old donkey.

“We used to joke his only friends were chickens,” said Gavin Miculka, assistant program director at the Kona Historical Society.

“And those chickens were kind of selfish friends, because they’d just come around when he was eating and steal all of his food,” added Carolyn Lucas-Zenk, volunteer coordinator and development associate with the society. “He’s getting old in age. We wanted him to have a friend. Wouldn’t everybody want a friend instead of being here lonely, by yourself, with some selfish chickens?” 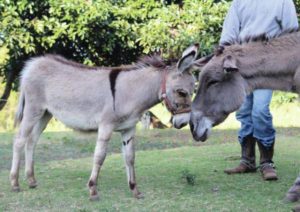 The new animal, yet to be named, won’t just fill a long-existing void in Charlie’s personal life, but will also one day take over demonstration duties at the farm, during which visitors are offered a glimpse of how the coffee industry operated in Kona during the first half of the 20th century.

The new companion was donated by Gary Yamagata, a fourth-generation Kona coffee farmer at Yamagata Farms, which was started in 1898.

Yamagata said he offered the young donkey to help preserve historical authenticity at the only living history coffee museum in the United States.

“Donkeys played an important role in the setting up of the coffee industry years ago,” he said. “That was our main way of packing the coffee from the field to the point where it could be taken to the mill.”

Yamagata made the donation on Dec. 27, 2016, but it wasn’t until Tuesday that the two donkeys finally met.

“When we unloaded the donkey, Charlie’s ears went up. When we brought her over to him, he was very curious,” Miculka said. “It was really cute just watching them nuzzle each other, nose to nose.”

The crowd funding campaign began in December of 2015 and raised just shy of $10,000 from more than 90 donors around the world. Those donations and help from dozens of volunteers made possible upgrades to the farm that were necessary to accommodate Charlie’s new pal. Work included clearing land of weeds and invasive plants, some tree removal, and the purchase and installation of new fencing.

“In order to make that happen, the community completely stepped up and helped us out a lot,” Lucas-Zenk said.

She added the farm has a special place in the hearts of many residents, who came as children and have returned in recent years with kids of their own in tow, either as parents or teachers. Many of them remember Charlie from their first trips to the farm.

The site is also visited by travelers from across the globe, Miculka said.

To help keep the experience authentic for everyone who makes the jaunt to the farm, Charlie will serve as a mentor to the new donkey, showing her the ropes until one day, she takes over some of the demonstrative duties he now struggles with in his advanced age.

The final step in the process is naming the new donkey. Because the community was so crucial in making this new friendship possible, Miculka and Lucas-Zenk said they want the public to participate in the naming process as well.

Anyone interested is invited to suggest possible names, which can be submitted until Sunday on the society’s Facebook page.

After that, a committee from the Kona Historical Society will select the top few names, which will be announced on its Facebook page, as well as at the farm and on the society’s website — www.konahistorical.org.

Voting requires a $1 donation, which can be paid at the farm or on the website. The donkey’s name will be officially chosen on March 1. All the money collected will go to care for the donkeys.

“The community was a crucial component in making improvements to our pasture and bringing the second donkey to the farm,” Miculka said. “We’re excited to now have the community play an active role in naming her.”

And Charlie’s excited, too, he added, as Kona’s most famous donkey won’t have to live out any more of his years alone, surrounded only by aloof farm cats and selfish chickens.