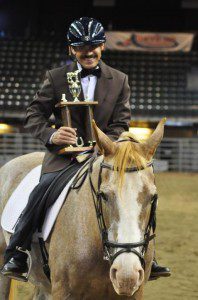 Cliff with Ms. Molly at the PATH Intl Awards

Cliff Uber has been recognized as the 2012 PATH Intl. Independent Adult Equestrian award winner!  He will be honored as a special guest at the PATH Intl. Awards Banquet held at the 2012 PATH Intl. Conference & Annual Meeting on November 2, 2012 in Bellevue, WA.  Thanks to Purina Mills for providing travel schloarships for the equestrian award winners.  As the Independent Adult Equestrian National Award Winner he receives scholarship reimbursement funds of up to $1500.

You may recognize Cliff from his appearance on the “Walk On, Part 1” episode of Those Magnificent Mules, and we are extremely proud of his success!

Bud (Sir Rocko) has earned the PATH Intl. Horse of the Year for Region 10 and will also be honored at the awards banquet.  As a regional winner, he is a finalist for the 2012 PATH Intl. National Horse of the Year Award, which will be announced and celebrated at the awards banquet.  Bud has been with Hearts & Horses since 2005 and is a most deserved recipient of this award!