The following post comes from the American Wild Horse Preservation. 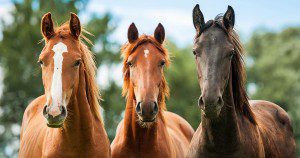 On Tuesday, April 19, America’s horses scored two significant victories on Capitol Hill. By a 25-23 vote, the House Appropriations Committee adopted an amendment to prohibit the expenditure of U.S. tax dollars on horse slaughter. And later that day, the U.S. Senate voted to adopt an amendment to the Energy Policy Modernization Act to protect the Corolla wild horses of North Carolina’s Outer Banks by ensuring the genetic viability of this historic herd of colonial Spanish mustangs. Both victories are testimony to the growing strength of the grassroots base of support for America’s horses — both domestic and wild — and the power of the people to overcome the special interests that lobby for horse slaughter and the eradication of wild horses on our public lands..

Thank you to Representatives Sam Farr (D-CA) and Charlie Dent (R-PA) for working to protect horses from brutal slaughter, and to North Carolina Senators Richard Burr and Thom Tillis and Congressman Walter Jones for their dedication to protecting the Corolla wild horses. A sincere “Thanks” to everyone who called and wrote their Representatives and Senators on these two issues. Both of these victories are important examples of how our calls and letters can and do make a difference for our wild horses and burros.