This is an update from the American Wild Horse Preservation Campaign.

We have been fighting for five long years to stop the BLM’s wipeout of Wyoming’s wild horses. Today, for the second time this week, the Tenth Circuit Court of Appeals has handed wild horses a major legal victory! The court ruled that the BLM broke two federal laws when it rounded up 1,262 wild horses from the Wyoming Checkerboard in 2014. 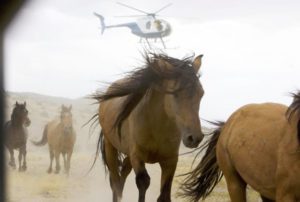 This is huge! It means that the BLM’s proposed 2016 Checkerboard roundup is also illegal! The BLM just notified the court that it was pulling the plug on this latest roundup of 500 wild horses, which was scheduled to start on October 18! Not only that, the decision permanently prevents BLM from treating the public lands as private and allowing ranchers to dictate whether or not wild horses will be allowed to live on our public lands.

This is our third major victory for wild horses in just over a month! On Monday, the Tenth Circuit ruled that BLM is not required to remove horses from public lands just because the population exceeds arbitrarily-established population limits. And on September 9, the BLM dropped plans to conduct dangerous surgical sterilization experiments on wild horses in Oregon, citing the lawsuit filed by AWHPC and The Cloud Foundation as the reason for its decision.

Read more about the Tenth Circuit’s precedent-setting decision and savor this latest victory for wild horses and burros.

We are proud to tell you that we succeeded in stopping anti-mustang ranchers and their political allies once again!

Yesterday, the Tenth Circuit Court of Appeals tossed out a lawsuit filed by the State of Wyoming against the Bureau of Land Management (BLM) demanding the removal of hundreds of wild horses from public lands in that state.

This is our second major victory for wild horses in just over a month! On September 9, the BLM announced that it was dropping its plan to conduct cruel and risky surgical sterilization experiments on wild mares, citing the lawsuit we filed with our coalition partner The Cloud Foundation as the reason for its decision.

Unfortunately, there is no time to pause for celebration.  We’re actively defending wild horses in Utah, Idaho, Nevada and California and we need your help to score more legal victories for wild horses and burros!

It’s hard to overstate the importance of yesterday’s decision. This precedent-setting ruling should put a stop to several frivolous lawsuits that have been filed by pro-ranching interests across the West. The Tenth Circuit Court of Appeals has now soundly rejected the ranchers’ spurious claim that the BLM is required to remove wild horses from the range once their populations exceed the arbitrarily-established “appropriate” management levels (AMLs).

AWHPC is pleased to have funded and led this legal fight, in which we were joined by The Cloud Foundation, Return to Freedom and photographers Carol Walker and Kimerlee Curyl.

You can help keep the wins coming for wild horses and burros! Please donate as generously as you can to our litigation fund today.

Thanks to your support, our wild horses and burros have a powerful legal team to defend them against anti-mustang assaults!