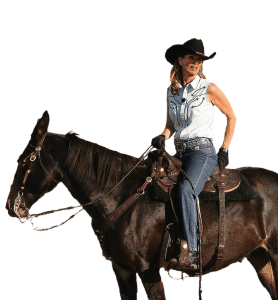 What happens when you take an incredible strong-willed girl and introduce her to an equally strong-willed animal? Magic. Such was the beginning of the journey that would see Meredith Hodges become one of the most respected competitors, educators and advocates of “longears.” Although she was a horse-crazy girl, that first encounter with a mule would change the direction of her life.

Meredith Hodges was born in Minneapolis, Minnesota, the daughter of “Peanuts” creator, Charles M. Schulz, and Windy Valley Ranch founder, Joyce Doty. While working at her mother’s ranch in the early 1970s, Meredith was introduced to mules and donkeys, and developed a deep respect for these misunderstood and underappreciated equines. It was the beginning of her journey to become what many refer to as a “mule whisperer.”

In 1980, Meredith moved to Loveland, Colorado, and started the hard work to transform a ramshackle 10-acre sheep farm into Lucky Three Ranch. She began breeding and training a line of mules that would become internationally renowned for their exceptional quality and athletic ability. These mules achieved world championships in jumping, dressage and combined training, successfully competing against horses. Lucky Three Sundowner was the first mule to ever reach fourth-level dressage and Little Jack Horner was the world’s first formal jumping donkey to clear four feet in exhibition. To this day, Lucky Three Ranch remains a cornerstone in the promotion of all equines, from its state-of-the-art teaching museum, to its hands-on ranch tours, and the beautiful equine sculptures that grace its grounds.

Meredith’s years of comprehensive study have produced a new, enlightened approach to the safe management and humane training of all equines. Her award-winning books, DVDs, television shows and research have been compiled into an extensive encyclopedia of information and reference materials at the Lucky Three Ranch website, while her fans have made her one of the most popular trainers on social media, with over 250,000 fans on Facebook alone.

In 2014, Meredith launched TMD Equine University, an accredited, comprehensive online equine school. This one-year certified course featured lectures, one-on-one help and  a graduation clinic, all conducted by Meredith herself. The lessons taught students how to interact with and train their own equines while preparing them for a career in equine management.

As an animal advocate, Meredith Hodges is a fearless voice for the compassionate treatment of all equines, a passion she feels today is still as fresh, inspiring and infectious as it was when she first discovered the world of donkeys, horses and mules. She has never wavered in her devotion to them and even now, in her fourth  decade as a trainer, Meredith says she is still listening to them and learning.

1986 – Meredith gives a presentation entitled, “Mules in Dressage” to the United States Dressage Federation in Houston, Texas. Mules are accepted nationally at non-AHSA shows and competitions.

1992 – Lucky Three Ciji is named Reserve International Side Saddle Organization All- Around Champion.

2005 – Meredith receives a commendation from the Colorado State Senate for her tireless efforts and long history of service to the equine community.

2013 – TMD Equine University is approved by the Colorado Department of Higher Education Private Occupational School Board to begin accepting students.

2013 – The new edition of Training Mules and Donkeys wins the gold medal in the Animals category at the Independent Publisher Book Awards.

Meredith’s landmark mule and donkey training has garnered much attention not only for its resistance-free and humane approach, but also for its proven results. She started out with traditional training techniques, as most trainers do, but quickly realized that there were flaws in this way of teaching: the owners needed training and conditioning just as much as their animals, and behavior modification was the key to the partnership. Rather than go on the road teaching clinics (where there was no one-on-one time), Meredith decided that she would instead document the training of her own animals in a filmed series for television that would show real trials that occurred along the way. Allowing her audience to see the process she used to teach her animals also allowed them to see the bond that developed through learning without using gimmicks or tricks. The result was the award-winning television series, Training Mules and Donkeys, which has aired on RFD-TV, the Discovery Channel and the Outdoor Life Network. A more-detailed version of the series is now available as a training set on DVD.

“A well-illustrated and comprehensive book on the training of mules and donkeys by an exceptionally well-qualified author.” 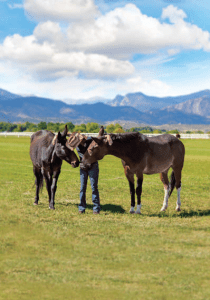 Mules have been called rebellious, stubborn, difficult, trouble makers. they’re also brave, affectionate and unconditionally loyal to those they love. Welcome to the challenging, complex, often misunderstood and always fascinating world of “longears,” as seen through the eyes of Meredith Hodges, the world’s leading authority on mules and donkeys. This is a world that she understands like no one else.

This 13-episode documentary series explores Meredith’s own personal and professional trials taking her from novice to champion, while discovering these magnificent animals and their vast capabilities. Experience the unique go-for- broke competitions at world-class events, complete with exclusive behind-the-scenes interviews and footage. As a long-time, passionate supporter of the healing power of equines, Meredith also takes us on an uplifting journey into the world of Therapeutic Riding for children, adults and wounded warriors with mental, physical or emotional challenges.

This award-winning series is a rousing adventure full of surprises, humor and inspiration that you won’t forget! 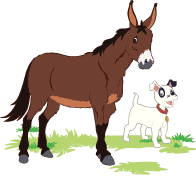 Meredith Hodges believes that children are the key to dispelling myths and preconceived notions. She developed the character of a young mule named Jasper to help children understand how truly intelligent and gentle mules and donkeys are. Jasper and his friend, Moxie the dog, have a series of adventures packed with excitement, adventure and mysteries, plus plenty of fun and interesting facts about mules and donkeys tailored just for kids.

All of the Jasper the Mule books and DVDs are designed to help children understand how to be kind to animals. e series teaches patience and acceptance and celebrates traditional family values, while using plain language and simple concepts to explore more complex issues. Both the books and DVDs are suitable for all ages.

“A timeless and whimsical story with vibrant illustrations to be enjoyed by kids and families alike.”

“An adventure-filled story geared towards children that the entire family can enjoy!

—Growing Up With Horses

“A story that every family member can enjoy and learn from.”

“As a mom, I love that each episode highlights the strong friendships between the characters.”

“Jasper the Mule was a HUGE hit in my home!” 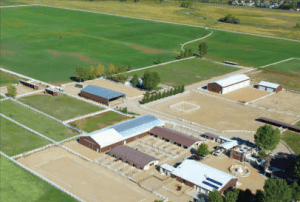 Located just forty miles north of Denver and nestled near the foothills of the Rocky Mountains, Lucky Three Ranch is a state-of-the-art, 127-acre working ranch and organic hay farm. It is also home to internationally recognized trainer Meredith Hodges and her champion equines.

Our tours are perfect for seniors, children and anyone with an interest in animals. If you are an equestrian, we have even more for you! All tours are interactive and customized for each group.

Come meet the saddle mules, including 18- hand Belgian draft mule, Roll, and the minis, including the newest additions, miniature donkeys Spuds and Augie. Experience the beautiful life-size bronze sculptures of the Loveland Longears Sculpture Park that commemorate many of the record-breaking feats of the Lucky Three champions. For the kids, visit Jasper’s Bunkhouse and see the diorama of Jasper’s Happy Valley Ranch. 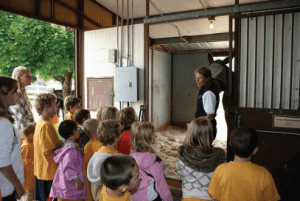 The ranch is handicapped-accessible and we provide tour carts for our guests who have mobility issues, or who might not otherwise be able to make the trek around the property.

Lucky Three Ranch is a working ranch and not open to the public, except for scheduled tours. Tours are available Monday through Friday by appointment only, and all tours begin at 10:00 a.m. The tour season runs from January through October.

Visit our tour site to book a tour!