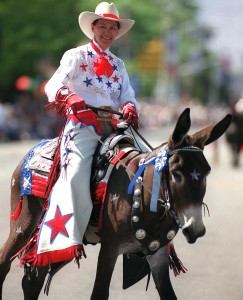 A professional trainer, judge and animal inspector, Crystal Ward owned the Ass Pen Ranch in Placerville, California, where she raised and trained horse, mules and donkeys. The first year she came to Bishop Mule Days was in 1979. She happened to be coming through Bishop on vacation and it really intrigued her. She thought the mules were simply outstanding. Crystal had a show career with horses, but the following year she decided she had to own a mule. She showed up the next year with a horse trailer in tow, and at that point Bishop Mule Days was still offering an auction. She swiftly bought a mule at the auction and had been coming back ever since.

Her first mule was a wild little critter that didn’t make much progress. So the following year she bought a mule named Skeeter Sea from George Chamberlain, a dealer in mules in Los Alivos, California; the mule was previously owned by Slim Pickens. When Slim Pickens showed up as Grand Marshal in the Bishop Mule Days Parade, he told Crystal, “We used to own that mule.” She showed him with 55 mules in the class and won the Western Pleasure class that year. Although he was nice in the Western Pleasure classes, she couldn’t see owning this mule for the long term due to his generally bad manners. Later, she picked up a mule in Northern Montana and brought him back and started training him…his name was Final Legacy. He was a good honest mule and she kept him for the long haul. 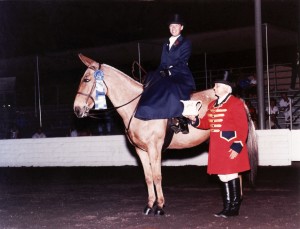 Back in the early ‘80s, Crystal got really interested in riding side saddle, so she joined the International Side Saddle Organization and ultimately rode in the Presidential Inaugural Parade with Final Legacy in 1993, hauling him from California to Washington, DC, in the middle of January. He was a good honest mule and she loved him. She showed him in many classes at Bishop Mule Days over the years…from Western to English, dressage, driving and side saddle. 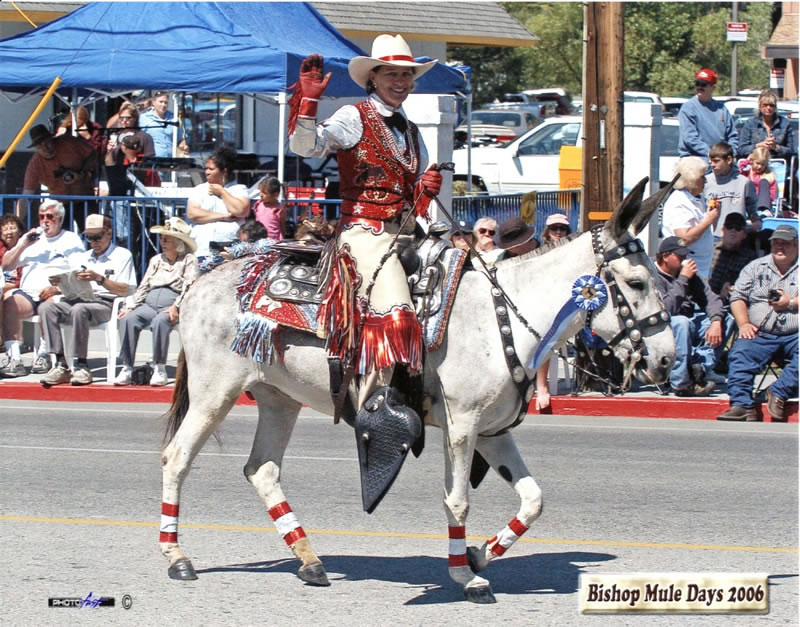 In more recent years Crystal switched to raising and showing donkeys. She had a variety of donkeys, from miniatures to mammoths. She fully understood that you have to take a different approach when training a donkey and produced training videos with Napa, California, videographer, Video Mike. She truly appreciated a good donkey: “Donkeys are like potato chips—you can’t have just one.”

In our interview in 2009, Crystal told me: “We call them [donkeys] ‘desert canaries,’ but that goes hand-in-hand with donkeys. They do like to talk and it can be loud, but you know I’ll still take a donkey any day. I live with the noise, but then again, I’ll have peacocks, barking dogs and roosters in my backyard. Donkeys are just one more noisy farm animal that I can certainly live with.” 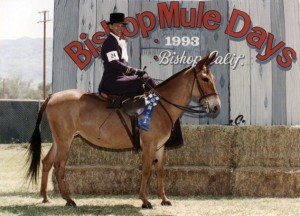 For Crystal, it was always a matter of learning…English, Western, Side Saddle…the whole nine yards! She always performed to the best of her and her mule’s ability and she believed a lot of it was a matter of finding just the right mule!

Crystal enjoyed her interview for my documentary series, Those Magnificent Mules; she appeared in “The Bishop All Stars” episodes. (We have all of these episodes available to watch online.) She said: “We were showing back in the early ‘80s, beating the paths to Bishop Mule Days. The one thing I know about mule and donkey people is that it’s fun competing…nice rivalry. When you come out of a class, your fellow competitors will shake your hand and offer you a bit of encouragement. It’s like family when you show at a mule or donkey show. It’s something you always look forward to until the next time.”

You are so right, Crystal! You will remain in our hearts, forever a part of our longears family… we will miss you!