Only five short weeks ago, Roll’s hooves were in good shape. When we brought him up to the tack barn today, he was not at all lame. 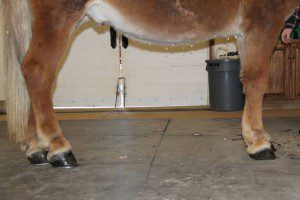 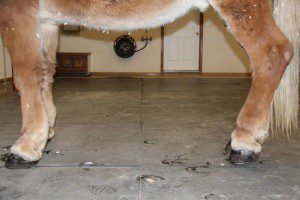 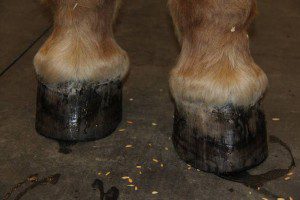 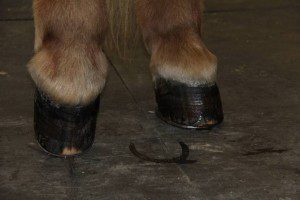 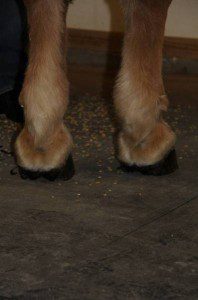 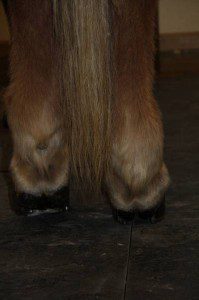 However, when our farrier Dean Geesen arrived this morning to do his hooves again we found that Roll had some fairly advanced symptoms of White Line Disease in his left hind foot. I am just happy that we were able to catch this fast-growing fungus as soon as we did. 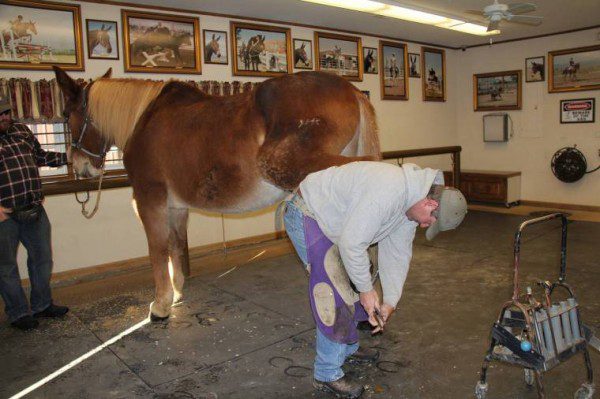 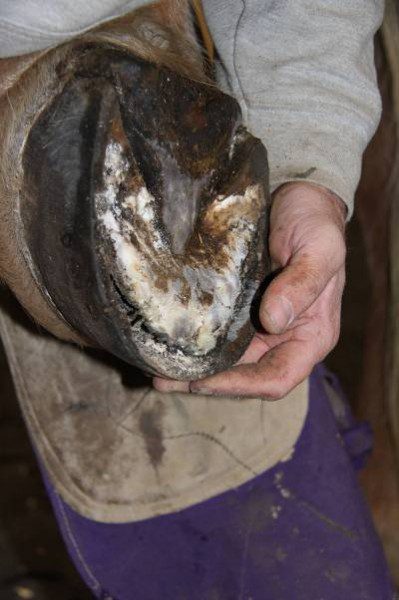 Our other equines are not getting done as frequently as Roll was. We opted to do him every five weeks instead of every 6-8 weeks because of the severe founder he had before. We wanted to be sure to keep his feet balanced so that any hoof growth would not begin to offset that balance. There is no telling how far this fungus would have progressed in another 1-3 weeks! 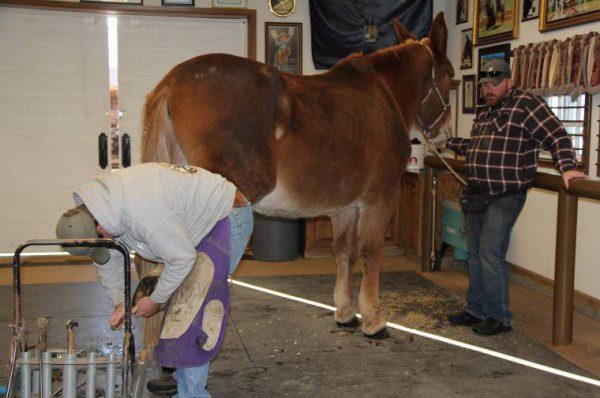 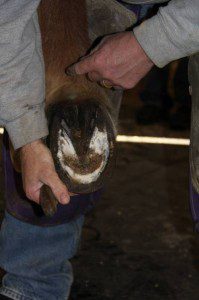 I am so happy that I kept a copy of the article that appeared in the American Donkey & Mule Society’s Brayer magazine in the July/August 2007 edition about White Line Disease. I have kept all issues because here is a wealth of useful information in the Brayer Magazine  that now serves as my Longears-Equine Encyclopedia! We called our veterinarian Greg Farrand and he was able to come to the ranch quickly to help assess the situation. 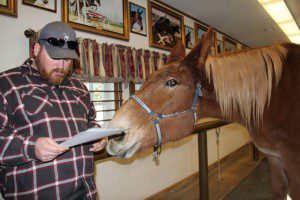 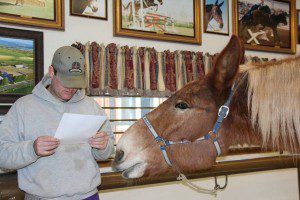 Roll’s left hind foot had a gap in it after Dean cleaned out the fungus of about 4” along the outside of the foot from back to front by ½” wide and almost 1 ½ inches deep. Dean said he had not seen a case of White Line in Colorado in 13 years. Typically it manifests itself in more humid climates, however Colorado has recently been unusually humid as we experienced with fungus in the hayfields earlier this year. It was a very acute and severe onset! 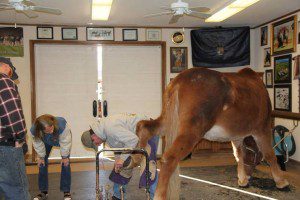 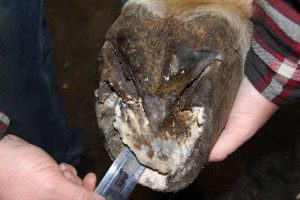 It was so wide and deep that my Ranch Manager Chad could get his finger into the cavernous space. It was a real concern that it had gotten this bad in such a short time. 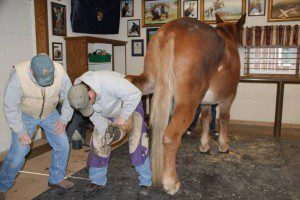 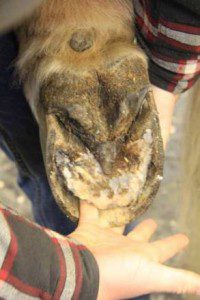 We had shoes on Roll’s hind feet to keep him from dragging them and wearing down his toes. Keeping a shoe on the left hind foot was not going to be an option since there was nothing to nail the shoe to on one side of his hoof. We talked about whether or not to cut away the affected hoof wall. Since Roll is a draft mule and has such large feet, we decided that keeping the “cavern” clean would not be too difficult, so we opted NOT to cut away the hoof wall right away. He would need all the support left on that foot for as long as he could get it. A smaller foot would have to be pared away immediately to treat it effectively. 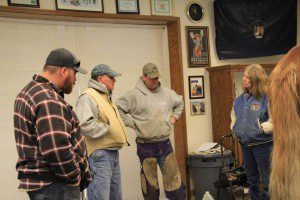 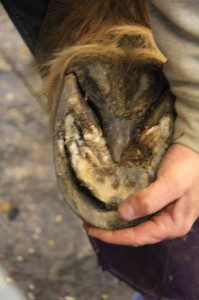 We wanted to salvage the hoof wall to keep his overall balance and the balance of his feet intact as much as we could. We decided that it would be better if we just didn’t put any shoes on the back again rather than causing an imbalance by shoeing the right foot only. 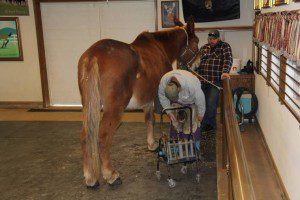 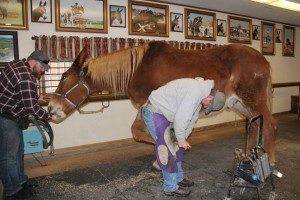 For the first five days, we planned to clean the “cavern” daily, rinsing it with iodine astringent, packing it with gauze dipped in the iodine and then well wrung-out to prevent too much moisture from collecting in the affected area. When dealing with astringents and the like, it is advisable to wear gloves! We took measurements of the hoof so we could accurately monitor his progress. Since this is to be a daily process, we are grateful for Roll’s impeccable manners and cooperation! 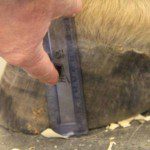 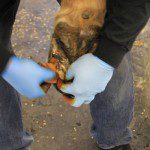 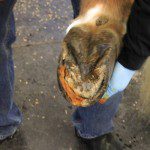 We talked about whether or not to use an “easy-boot” to hold the gauze in, but decided that duct tape could do the job nicely. It would be easy to replace daily and would not trap moisture like the “easy-boot” could because the duct tape would erode as he walked on it. This would allow the air get to it and keep it drier to promote healing. 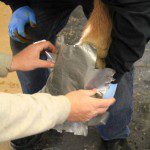 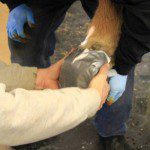 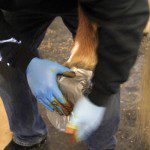 We also decided that it might be prudent to be proactive and put shoes on his front feet since he will no doubt be throwing his weight forward if the White Line Disease begins to cause any pain. Right now, he is sound and not lame at all. That is definitely encouraging. 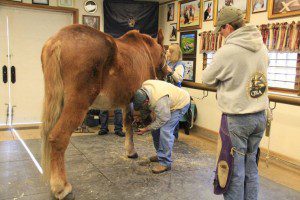 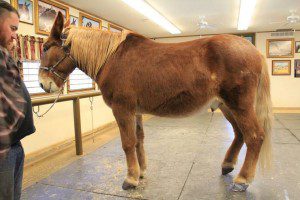 This process will need to be repeated every day for as long as it takes for the foot to be rid of this fungus, but instead of using the astringent iodine, soon after the initial four days, we will x-ray him to get a baseline and make sure we know what we are dealing with. Then going forward, we will use a more diluted form of iodine like Providone-Iodine, Betadine or a product called “White Lightning” that has been developed specifically for this purpose. According to our veterinarian Greg Farrand, these are all antiseptic rinses and any of them should work fine. 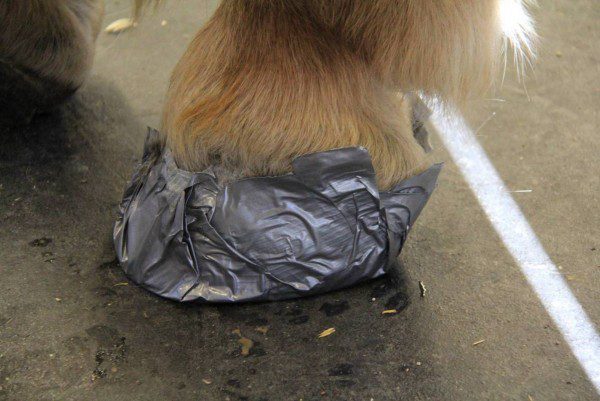 The prognosis is encouraging. We know we need to make sure the “cavern” is cleaned out thoroughly each day and the gauze and tape are kept clean upon application. This is a long-term therapy and will take 14-18 months to grow back out…if it can. Although White Line Disease is very similar to thrush, it is not a stable management issue like thrush. The onset is quick and there does not appear to be a consistent explanation as to exactly where it comes from. To be pro-active, we added a few more inches of pea gravel to his run so that when the snow melts and the mud mixes with the old pea gravel, we won’t have mud to pare out of the “cavern.” The pea gravel is less likely to mesh with the fungus and should be easier to clean. This is just the beginning of yet another challenge in Roll’s journey and we will do follow-up posts to keep you informed on Roll’s progress as we usually do. Roll would truly appreciate your thoughts and prayers! 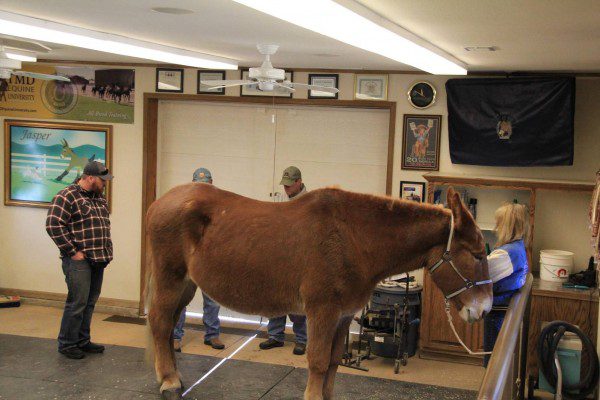