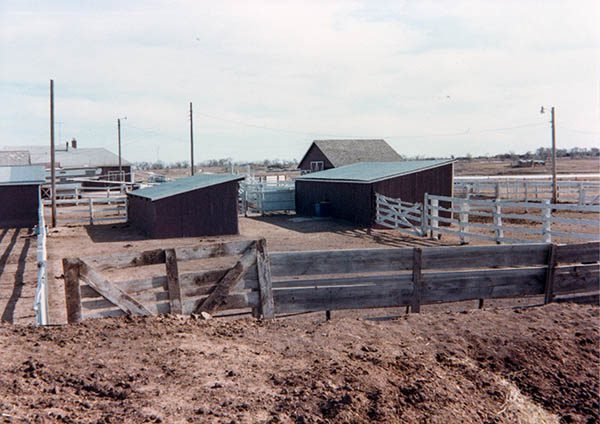 In the beginning, my home, Lucky Three Ranch was a 10-acre sheep ranch with a small house and hay barn, an old Quonset hut, a feed barn, four three-sided sheds, and a perimeter fence made from sheep fencing with barbed wire on top. It was crossed-fenced around the sheds with some heavily chewed board fences and anything else the previous owner thought could be used for fencing. I’d already had experience with horses, but it wasn’t until my first mule, Lucky Three Sundowner and my first donkey jack, Little Jack Horner, finally arrived at the new Lucky Three Ranch that my lessons with Longears really began! 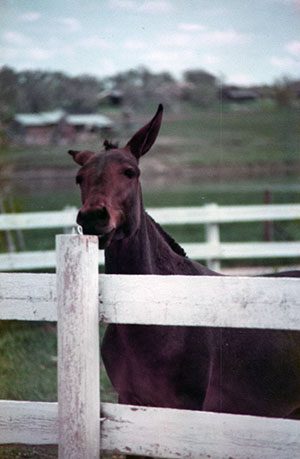 One of the first things I found out about Longears is that they are incredible artists, and they will “sculpt” anything and everything they can get their teeth, rumps or hooves on! My Longears immediately set to work sculpting the posts on three sheds that were near the house and the fence posts around them. We tried everything to get this to stop, but to no avail, and in three short years, we ended up with posts that were no bigger than toothpicks in some places and marvelously contoured from top to bottom, into all kinds of remarkable shapes. We hated to put a cramp in our mules’ artistic style but, clearly, the wooden posts and sheds had to be replaced. 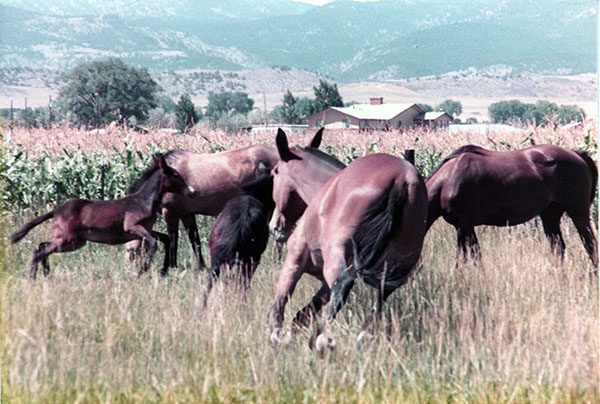 By now, we had bred three more mules, so while we were working on replacing the three sheds, we put the whole herd of mules and mares into a five-acre pasture. One day, while we were working on the new sheds, the whole herd suddenly showed up behind us! Apparently, one of our equines had pulled a “Houdini,” opening the gate and letting everyone out of the pasture. Being the affectionate and curious animals they are, our Longears (and horses) then decided they’d better come see if we needed any help.

When we rounded up the herd and took them back to the pasture, we almost fell over! The herd had sculpted all three support posts on the last existing shed that was in the pasture, so it now looked just like the other three sheds we had just replaced!

With all this creative woodworking going on, we realized the new barn would have to be made of steel. We built a 14-stall, Port-A-Stall barn with steel panels in the runs, and stall floors six inches higher than the floor of the barn alleyway to help keep it from flooding. We added four inches of pea gravel in the runs for good drainage but, after several seasons, the runs on 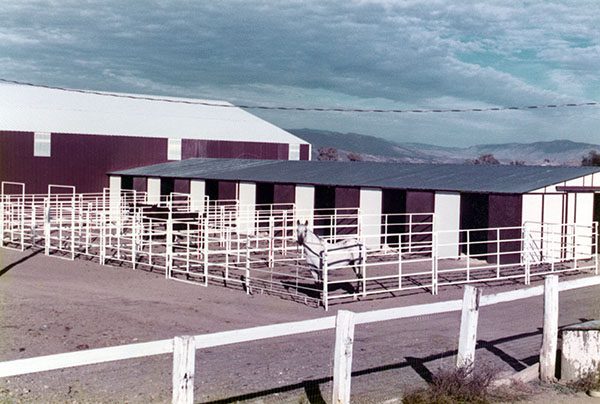 It took us all day long to take down the panels, and by the end of the day, we were pretty exhausted. The truck would be bringing the additional pea gravel the next day, so we wrapped up the chores and went to bed. What I didn’t know was that Lucky Three Eclipse (aka “Ely” in the last stall on the south side) had been watching us all day long through the openings in the barn doors. When we came out in the morning, we found that Ely had pulled the pins from the side panels, and by putting his head through the bars of each panel, had arranged them into a huge pen for himself that ran the full length of the barn, trapping the other mules and the stallion in their stalls! Now that the south side pens were also opened up, we decided to use the first truckload of pea gavel on the south side pens and ordered yet another load of pea gravel for the north side pens. After we got the pea gravel in place on the south side, we put the panels back where they belonged, freeing the other mules and stallion on the south side from their stalls. We then put Ely back where he belonged in his stall and pen on the far end, finished the north side pens, returned all the mules from the north side of the barn back into their stalls and runs, and finally got things settled down. I can guarantee you we all had a new appreciation for Ely’s ingenuity! 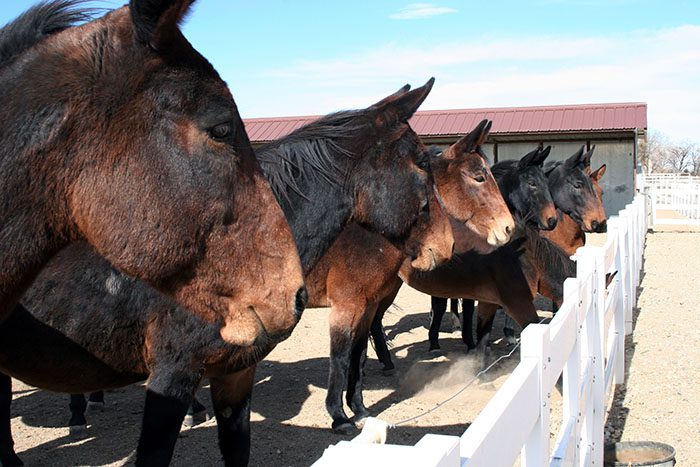 We spent the next several years taking down barbed wire, mending old field fences and replacing the old sheds with steel Port-A-Stall sheds, replacing cross fences with vinyl, building two more steel barns and lining our indoor arena with steel. As we all know, Longears are very intelligent, and they will use their “smarts” to figure out a way to simplify a task. If you want to step over a fence but it’s a little too high, what do you do? Well, if you’re a mule, you sit on it to push it down, and then you can step over it. Although the horse fencing we used to replace the sheep fencing was fairly high, my Longears still managed to sit on the middle of it, bowing it out into incredible, irregular shapes…after they had first shorted out the hotwire, of course. This was their daily ritual. Maybe they had a crew meeting first thing every morning and planned how they’d do it. Who knows? 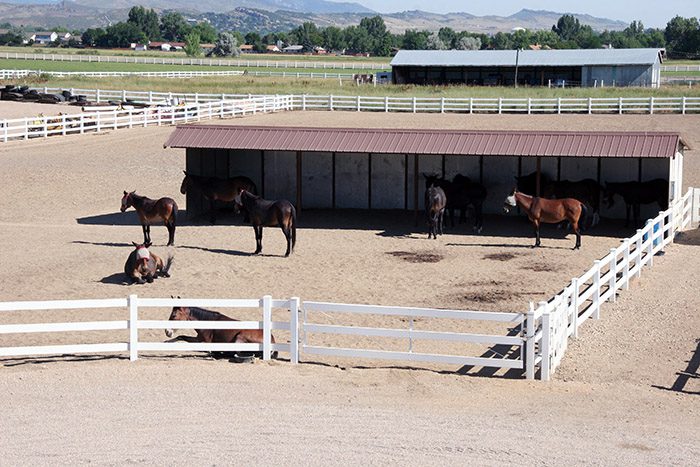 But to this day, I still don’t know how they shorted out the hotwire! One thing my Longears have taught me through our years together is that, if you are going to have mules, you’d better learn to have a good sense of humor or you will never survive their pranks! We learned to drill holes in the posts for a hotwire across the top of the new vinyl fencing and that worked very well, but that was only after they had removed all the vinyl rails from the fence overnight. They were delighted that I had given them their own “Tinker Toy” set. They never left the pen, although they could have! Each time our mules have made “art,” pulled pranks, or managed amazing escapes, we learned how to improve our system and materials, until finally upgrading to an all-steel facility with vinyl fencing topped with a relatively inaccessible hotwire. Now we no longer need to worry about what the mules and donkeys might do…until the next time. (PLEASE don’t tell Ely I said that!)