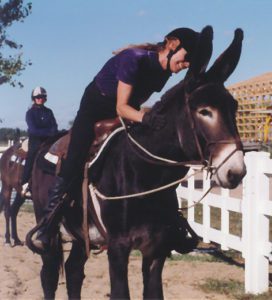 It was the first week in December. The trees had long since lost their brilliant fall colors, the grass had turned to brown, and the air held the chill of winter. The mules, donkeys, and horses of the Lucky Three breeding farm basked in the peaceful morning sun, awaiting their morning feeding. We made the rounds, checking each animal and were surprised to come upon our jack, Lucky Three Excalibur, otherwise known as “Zee,” in a very depressed state. This was not normal for him and caused us some concern. Zee was a very special Mammoth donkey jack. His grandsire, Little Jack Horner had been famous for the production of refined, attractive and horse-like saddle mules. For years, we searched for just the right jennets to begin producing Mammoth jackstock that would carry on this tradition. However, Little Jack Horner kept producing daughters from the jennets. Finally, we bred L.J.’s three daughters to another fine jack, Blue Zebulon from the Bitterroot Mule Company and each of them had a jack colt. Lucky Three Excalibur was the finest of the three jack colts. He was tall, refined, black, and beautiful! He was the successful culmination of years of breeding research and implementation of the knowledge we gained. 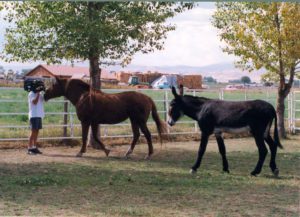 No other was as loving, affectionate, and willing as Zee! His ground training went smoothly and he was trained to breed in hand with no difficulties. Clients were exceptionally pleased with his offspring and he went on to become a star. Zee was actually broke to ride while shooting the donkey training videos for the Training Mules and Donkeys video series. Zee’s career soared when the videos were revised for television and he obtained a starring role in the making of the Discovery Channel’s “The Ultimate Horse.” If he was born handsome, he grew to be even more magnificent. In adulthood, he matured to 15.2 hands sporting the shiniest black coat and incredibly good conformation for a Mammoth donkey. 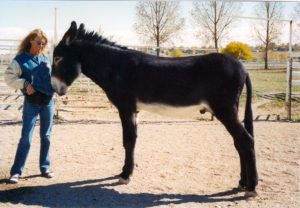 When I saw him standing so depressed, I thought about the years that went into his making and hoped this wouldn’t be more than a mild colic. We called our vet who came out and did a complete checkup. He said he wasn’t really sure what was going on with him, but it wasn’t colic and after a week with no change, he suggested that we take him to Colorado State Veterinary Teaching Hospital for further examination. Trooper that he was, Zee loaded easily, but it was evident that he was in distress. 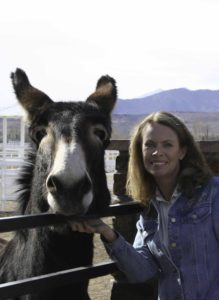 Zee was presented to the Colorado State Veterinary Hospital in Fort Collins with a history of being off his feed for almost a week. At the hospital, they did a barrage of testing and diagnosed him with “idiopathic hematuria and interstitial nephritis.” At this point his prognosis was only fair. Physical exam findings and laboratory results revealed that Zee initially was presented with “signs of mild hematuria and azotemia (decreased renal function). His kidney enzymes were increased in his blood and he had an inflammatory complete blood count. He passed blood-tinged manure on several occasions, but this resolved itself. He was treated with antibiotics, anti-ulcer medications and intravenous fluids. Over the course of his hospitalization, his attitude and appetite improved as his azotemia improved. He was removed from intravenous fluids when his creatinine stabilized at about three.”

“Shortly thereafter, the hematuria worsened and he was urinating large amounts of frank blood. Bladder endoscopy initially revealed urine coming from both ureters, but over time, the hematuria worsened endoscopy revealed that the blood was originating from the left kidney and the right kidney was not producing much urine. A biopsy of the right kidney revealed an interstitial nephritis (inflammation) with signs of regeneration. The bleeding continued and Zee’s pack cell volume fell to 10% necessitating a transfusion.”

Back at the ranch, Little Jack Horner knew something was really wrong. My face and demeanor must have said volumes. I had been to the vet hospital everyday, spending at least an hour with Zee, brushing, massaging, talking and doing everything I could think of to keep up his spirits. He was nearly immobile, but on good days, we could take a short walk. He was so weak, even the short walks were laborious. He would stop and put his head down to consider nibbling the dried grass, but quickly gave up the effort. He would have to stop and rest after only a few steps. He had dropped over 100 pounds of body weight. It was apparent…he was dying. 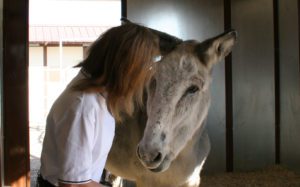 I told Little Jack Horner that this day he would have a very important mission. He was the best choice for the blood transfusion to his grandson. L.J. seemed to understand and gave me no trouble when I loaded him into the trailer and took him to the vet hospital. When we arrived, they asked if we needed to sedate him. All I had to do was look at him to know he was going to be a trooper, too. No sedation was necessary. L.J. stood like the champion he was while they extracted pints and pints of blood from him. I let L.J. know how grateful I was for his contribution to his grandson’s health. He was quietly appreciative.

The days immediately following the transfusion, Zee seemed to improve, and then crashed again. A renal nuclear scan revealed that the left kidney was producing the majority of the urine, but that the right kidney was functional. This made removal of the left kidney impractical.

The vet hospital told me that there wasn’t much hope and that I would probably have to make “a decision.” I knew what they meant, but I wasn’t ready to give up quite yet. I believe in miracles and I also believe in exhausting every possible avenue of hope. I had but one last long shot left. I asked the hospital if they would mind if I brought in my equine chiropractor/acupuncturist, David McClain. Since there was no more they could do for Zee, they agreed. Dr. McClain treated Zee three different times at the hospital over a period of days. Zee was monitored daily for a falling hemocrit and periodically creatinine measurements and complete blood counts were performed. Zee was removed from antibiotics when his blood count normalized. On January 11, 2000, Zee’s urine no longer contained frank blood and he was observed for two more days and then discharged.

It was almost comical the day he was discharged. When I arrived with the trailer to take him home, doctors, vet techs, students and a hoard of others emerged from the hospital to see him off. It was incredible to see the number of friends that Zee had made during his stay. Each of them had tears of happiness on their faces knowing how close to death he had come. 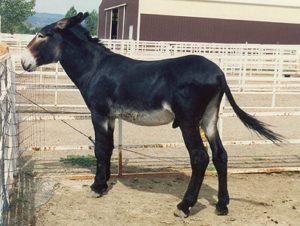 We monitored Zee very closely for the next year and he steadily improved. We can really only guess what caused all this, but the most reasonable assumption would be that he wrenched his back after covering a mare, pinched the blood supply to the kidneys and caused a secondary infection. Manipulation and acupuncture by the equine chiropractor relieved the pressure and promoted healing. There was a great deal of trauma to his body and we still weren’t sure he would really make it back to normal with his kidneys being so compromised, but did make it through and was happy and healthy for several more years. You would never know he had been through so much.

Zee’s illness brought a lot of people together, sharing the things that each had to offer. If I had learned nothing, I had learned to value what others have to offer, no matter how insignificant it may seem. When we share who we are, we can create miracles. Zee shared his miracle with all of us and it resulted in the donkey training books and videos that I have produced to share with the world!

To learn more about Meredith Hodges and her comprehensive all-breed equine training program, visit LuckyThreeRanch.com or call 1-800-816-7566. Check out her new accredited equine university at TMDEquineUniversity.com and her children’s website at JasperTheMule.com. Also, find Meredith on Facebook, YouTube and Twitter.