This is an Action Alert from the The American Wild Horse Preservation Campaign. 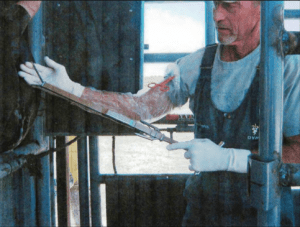 Photo of a veterinarian with a chain ecraseur being used during an ovariectomy.

The Bureau of Land Management is planning barbaric, archaic and dangerous sterilization experiments on captured wild mares at its Wild Horse Corral Facility in Hines, Oregon. These experiments have never before been performed on wild horses or, in the case of two of the three proposed procedures, in horses anywhere at all! The agency is accepting public comments on an Environmental Assessment (EA) and now is the time to voice our united and strong opposition to this outrageous proposal!

At least 100 mares — 75 of whom will be pregnant — will be subjected to “ovariectomy via colpotomy,” a dangerous procedure in which a veterinarian makes an incision in the mare’s vagina, inserts his arm into the vaginal cavity, manually locates the ovaries and rips them out using an “ecraseur,” a rod-like device with a chain on the end. The painful procedure will subject mares to the risk of infection, hemorrhage and evisceration (intestines coming through the incision) and cause mares in the early to mid-stages of pregnancy to abort their fetuses.

In domestic mares, this procedure is not common, but when performed, requires a post-surgical 4-7 days stall confinement, during which the first 48 hours are spent in crossties to prevent the mare from lying down. No such restraint is possible in wild mares, and the BLM intends to turn them out to corrals after the surgery with open incisions and no restrictions on movement. This fact lead the National Research Council (NRC) to conclude that the fatality rate for the BLM’s proposed experiment would be “higher than the one percent reported in the published literature,” which is based on surgery performed in domestic mares.The NRC a stated that less invasive techniques would be preferable to this procedure in wild mares.

Two less invasive experimental procedures are also proposed that would use endoscopes to achieve sterilization without removal of the ovaries. However, these procedures have never before been done in horses, domestic or wild, and appear to be infeasible for use in wild mares.